Friends Remember Fr. Dan Berrigan: “He Said He Didn’t Believe in Heroes, He Believed in Community”

We speak with close friends of the legendary antiwar priest, activist and poet Father Daniel Berrigan, who has died at the age of 94. “I just always considered Dan to be in the league with Mahatma Gandhi and Martin Luther King and Dorothy Day and our greatest people,” recalls Father John Dear, a Catholic priest and longtime peace activist. “He was the first priest arrested in U.S. history against war, maybe the world. … [I]t was so groundbreaking.” Dear was one of Daniel Berrigan’s closest friends and worked with him for 35 years. He is Berrigan’s literary executor and the editor of five books of his writings. We are also joined by Bill Quigley, who was one of Daniel Berrigan’s attorneys. He is a professor and director of the Stuart H. Smith Law Clinic and Center for Social Justice, as well as the Gillis Long Poverty Law Center at Loyola University. Quigley recalls asking Father Berrigan, “Who are your heroes?” His response was, “I don’t believe in heroes, I believe in community.”

AMY GOODMAN: —for the funeral for your dear friend, Father Dan Berrigan. In a nutshell, if you can share the description of Dan’s activist and religious—the trajectory of his life?

FATHER JOHN DEAR: It’s to me. Well, thank you very much, Amy. Well, you know, I just always considered Dan to be in the league with Mahatma Gandhi and Martin Luther King and Dorothy Day and our greatest people. And he was the first priest arrested in U.S. history against war, maybe the world. He certainly changed the church in the United States and the world. We never had this before. That’s what’s so amazing about Dan and Phil, priests speaking against war. And now that’s kind of normal for a lot of people. But for then, it was so groundbreaking.

You know, for me, Dan spoke to me all along about resistance now as a way of life, that we, as people of peace and nonviolence, have to spend our lives saying no to the culture of war, and working for the abolition of war and poverty and nuclear weapons. And as Frida talked about, I remember one of the first things he said to me 35 years ago was talking about resisting death as a social methodology. If you’re going to spend your life resisting death, you learn to live life to the full. If you want to be hopeful, you have to do hopeful things. And he said, remember, “Don’t just do something. Stand there.” That’s what I hear Frida saying. He was faithful. Early on, he was saying, “Make the connections between all the issues as activists and uncover the spiritual roots of our work for peace and justice.” Very beautiful. And that we’re doing this as—you know, he said, “We’re trying to discover what it means to be a human being in an inhuman time.”

And then, lastly, I remember him talking, early on, too, about—about his learn from Howard Zinn, that, you know, things change by bottom-up, grassroots movements, from Jesus to Dr. King. And the movements need some people on the front lines. His phrase was: “Good people who break bad laws and accept the consequences for their actions to stop the killing and injustice done in our name.” So, he’s a great saint and a great prophet and one of the great peacemakers of our age, and we’re celebrating him. And it’s not the end of an era. We have to carry on the life and witness that he gave us and—into a new era to work to end war and nuclear weapons and poverty.

AMY GOODMAN: Bill Quigley, your thoughts on your representation of Dan Berrigan here in New Orleans, where we are together at the public television station WLAE?

BILL QUIGLEY: Well, Dan had a big history in New Orleans. He taught at Loyola. His brother Phil taught at the St. Augustine’s High School here. I represented him when he resisted after the Jesuits were murdered in El Salvador, part of a nationwide civil disobedience.

AMY GOODMAN: The six Jesuit priests and their housekeeper and her daughter, murdered in November of 1989.

BILL QUIGLEY: Correct. And he was a person at peace. He was a person calm. He actually was hilarious, as well, because he didn’t really accept the force that was attempted to be brought on him by the legal system. He was arrested, he was released, he refused to come back to court. He said—he wrote a letter to the judge, said, “This is ridiculous to come back for a little thing like this, blocking elevators.” And he was arrested. Ramsey Clark called me and said, “We have to get him out of jail and get him back here.” He came back to court here. Martin Sheen came as a character witness for him. And it was a beautiful event.

“The Cause is the Heart’s Beat”: See Father Berrigan Recite His Poem “Some” in 2006

NEXT“The Cause is the Heart’s Beat”: See Father Berrigan Recite His Poem “Some” in 2006 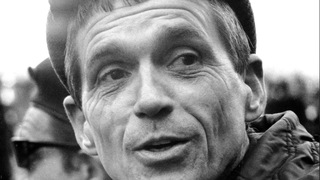