In a tweet that went viral after Sunday’s attack on an LGBT nightclub in Florida, ACLU staff attorney Chase Strangio wrote: “The Christian Right has introduced 200 anti-LGBT bills in the last six months and people blaming Islam for this. No.” The attack has also renewed calls for lifting what advocates say is a medically unnecessary ban on blood donations from many gay and bisexual men. We speak with Hannah Willard of Equality Florida.

AMY GOODMAN: I wanted to go back to Hannah Willard for a moment, who is with us from Orlando. She is with Equality Florida, a statewide advocacy organization for gay, lesbian, bisexual and transgender rights. Hannah, what are you calling for now?

HANNAH WILLARD: Well, we are calling for a myriad of next steps. Yesterday we moved very quickly to help people gain access to grief counseling resources. Immediately, we called for people to go to their local blood banks and make sure that they were giving blood. We also called for folks to donate if they felt called to do so, through a GoFundMe campaign that raised over a million dollars in one day alone. So many folks were looking for tangible next steps, and we wanted to provide those vehicles for folks to have those avenues to feel like they were standing in solidarity with those that we lost.

But, you know, the best tangible next step that folks can take is to teach our children to treat each other with dignity and respect, to treat those whom they don’t understand with empathy and compassion. That’s how we build a Florida where every single child growing up knows that they are celebrated and valued for exactly who they are, no matter who they love. And that’s the Florida that I want to see.

AMY GOODMAN: Talk about the ban on gay blood donors, Hannah. I know there’s been a major call for blood donations. We saw the lines yesterday in Orlando.

HANNAH WILLARD: Absolutely. Well, if there was ever a time when this ban was seen as the discriminatory and unnecessary thing that it is, it’s now more than ever. This ban has been debunked as medically unnecessary, as discriminatory. There were friends and family of those that we lost who were itching to be able to do something to support those who were still fighting for their lives in the hospital. Every single minute counts when you’re on—when you’re in surgery, open on the table and needing a blood donation. It’s really a shame that the FDA has yet to lift this unnecessary ban. But we also know that, moving forward, these types of tragedies always serve as a catalyst for changes in policy and lead to different actions so that we can move forward to prevent senseless violence like this from ever happening again.

HANNAH WILLARD: It is not up for debate that homophobia and bigotry are still alive and well in Florida and across our country. The LGBTQ community is under attack, plain and simple. We were very tangibly and violently under attack at Pulse nightclub this past weekend, but, of course, over 200 anti-LGBT bills filed here in Florida and in states across the country, legislators are targeting our community where we are most vulnerable, which is often transgender people and especially transgender people of color. I was so thankful that Daniel mentioned intersectionality earlier, because there’s so many reasons why marginalized communities must band together to ensure that we move forward together. We all have the same oppressors. We all have the same opposition. And I’m proud that we work with a diverse intersectional coalition here in Orlando and here in Florida to fight back against our opposition. And certainly we’ll be fighting back in the Legislature and through concrete policy changes in the coming years.

AMY GOODMAN: Daniel Leon-Davis, your final comment, as you continue to gather information about people you knew and didn’t know who are—who are either victims or the loved ones of victims?

AMY GOODMAN: We’re going to break, speaking of breaking points, and we’re going to come back and talk about guns, talk about what happened in another country when a massacre rocked that country, the worst in Australia’s history. And we’re going to continue our discussion with the imam. I want to thank Hannah Willard, and I want to thank, as well, Daniel Leon-Davis of—and we’ll link to your piece, “The Site of the Orlando Shooting Wasn’t Just a Gay Nightclub. It was My Safe Haven.” This is Democracy Now! We’ll be back in a minute.

“How Many Shootings Must We Have?” Florida State Senator Calls for Gun Control After Pulse Massacre

NEXT“How Many Shootings Must We Have?” Florida State Senator Calls for Gun Control After Pulse Massacre 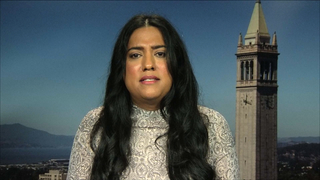