Oakland is facing a major police scandal in which multiple Oakland police officers are facing allegations of statutory rape and human trafficking after allegedly having sex with an underage girl who was working as a sex worker. Three police chiefs have resigned in recent days. The Associated Press reports that of the 14 Oakland police officers involved in the sex crime scandal, two have resigned and three others are on paid leave. On Friday afternoon, protesters demonstrated outside the Oakland Police Department headquarters, wrapping red “danger” tape outside the department and posting “Megan’s Law” warnings to alert the community that there are statutory rapists in their vicinity. We speak to Cat Brooks, an Oakland-based Black Lives Matter activist and co-founder of the Anti Police-Terror Project. Brooks helped organize Friday’s protest against the Oakland Police Department.

AMY GOODMAN: I want to turn to another clip of Oakland Mayor Libby Schaaf speaking at a news conference Friday evening.

MAYOR LIBBY SCHAAF: I will not be appointing another acting chief. Instead, the command staff of the Oakland Police Department will be reporting to the city administrator, Sabrina Landreth. I feel that this is an appropriate time to place civilian oversight over this police department and to send a very clear message about how serious we are of not tolerating misconduct, unethical behavior, and to root out what is clearly a toxic, macho culture.

AMY GOODMAN: That was the mayor of Oakland. Cat Brooks, you’re an Oakland-based Black Lives Matter activist, co-founder of the Anti Police-Terror Project. You helped organize the protest outside the Oakland Police Department Friday, where you wrapped crime tape around the police department. Are you satisfied with the actions that have taken place? And can you respond to this astounding story of one police chief after another being forced to resign in the midst of this sex scandal?

CAT BROOKS: We’re not at all astounded. This is just a continuation of scandal and a really predatory and criminal culture of the Oakland Police Department that has plagued that department for years and years. And on the part of Libby Schaaf, it’s too little, too late. One of the big questions that we’re asking is: Why did it take this to finally oust Whent, when in 2015 seven black men were murdered by the Oakland Police Department? And she stood by their side every single time, including the murder of Demouria Hogg, who was actually asleep in his car. So, the Oakland community is not surprised that this is happening with the Oakland Police Department. We’ve been calling them criminals for years and years. And, you know, Libby, instead of responding to community, has consistently doubled down on her support of the police department until now. So, again, it’s too little, and it’s too late.

AMY GOODMAN: So, talk about what your demands are and what you did on Friday and what you understand this scandal to be that is bringing down the entire leadership. What happened to this young woman who’s being called Celeste Guap?

CAT BROOKS: So, from our perspective, Celeste Guap was raped, and she was trafficked by sworn Oakland police officers and other agencies, right? So, SFPD, Richmond, the sheriffs and the CHP, I believe, have all been indicated. And so, in response, we did a mini shutdown of the Oakland Police Department to really raise awareness for the community about what was happening in the Oakland Police Department. We dropped a banner that had a young woman with hands over her mouth, that said, ”OPD guilty as charged of human trafficking and statutory rape.” And I want to point out that while we were out there, two women came by and broke down and said, “Where were you when this happened to me?” Right? They’re not women that wanted to be identified. But that, to me, was astounding, that in the middle of the day, randomly, these women walked by, and they had similar stories to tell.

So, moving forward, we really see this as an opportunity for those of us who have been on the front lines or engaged in pushing back against the police terror that is in Oakland to get some solid demands that could make some changes for the people about how police engage. And so, one of those is around our civilian police commission. Right now there’s a measure moving through City Council that would create a police commission. But right now it says that City Council and the mayor would appoint people to sit on that commission. Well, we’re pretty clear that the mayor and City Council have shown their ineptitude at being able to appoint anybody to hold these rogue officers accountable, and so we really think this is the time to push for true civilian control over that police commission, that would allow community members to have the power to hire, fire, discipline, etc.

We also want a challenge to the policemen’s bill of rights, which is what’s protecting these officers. It’s why we don’t know the names of these predators on our streets. We believe that we have a right to know who the predators in our communities are and that Oakland needs to really push forward and release the names of those officers.

And then the third real demand is around our police budget. Sixty percent of the city budget goes to the Oakland Police Department, rather [than] to programs and policies that we know and research shows actually impact crime rates. And so, we’re asking for half of that budget to be redirected to youth programming, to mental health services, and we’ve got a major housing crisis in Oakland, and so moneys that will go to stemming the tide of black and brown residents that are being pushed out of our city by Libby’s development policies and practices.

AMY GOODMAN: The civilian review board, how do you want it to be constituted?

CAT BROOKS: We want it to be constituted that the people that sit on that board are community members that are selected by Oakland community members, as opposed to City Council and the mayor appointing the people who then appoint the people. We see, like in San Francisco, for instance, the police commission out there that has a model where elected officials get to appoint folks. You see a lot of cronyism happening. Someone that sits on there is married to a police officer, etc. We don’t feel like that’s enough accountability for the Oakland Police Department.

CAT BROOKS: We do want to see arrests and convictions of the officers that were involved. You know, if I or you committed statutory rape, we would be arrested. And there are many of us that feel that it’s time for Libby Schaaf to go. We see her doing a lot of deflection and pushing all of this off on the Oakland Police Department, but she is—she is responsible. This is her police department. The buck stops with her. If I own a company and my employees are, you know, running amok, at the end of the day, it’s on me. And we believe it’s on Libby Schaaf. And this is just an extension of the impact, particularly on vulnerable members of the Oakland community, at the hands of the Libby Schaaf administration.

AMY GOODMAN: Cat Brooks, I want to thank you for being with us—

This is Democracy Now! When we come back, we go to Oaxaca, we go to Mexico. We believe eight people have been killed, a hundred wounded, by the police in Mexico. Stay with us. 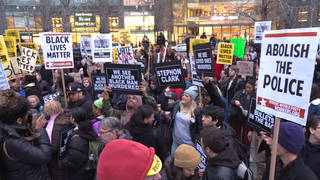