This week, Democracy Now! broadcast from the Democratic National Convention in Philadelphia, where producer Laura Gottesdiener interviewed Philadelphia activist Suzy Subways, who is among the activists who are publishing an independent newspaper called the UnConventional Times to cover protests and walkouts and more.

StoryJul 25, 2016The Other Philadelphia: Inside the People’s Fight Against Gentrification & Privatized Education

AMY GOODMAN: This is Democracy Now!, democracynow.org. We are “Breaking with Convention: War, Peace and the Presidency,” in Philadelphia, Pennsylvania, covering the Democratic National Convention, inside and out, from the streets to the convention floor. On Tuesday, Democracy Now!'s Laura Gottesdiener interviewed Philadelphia activist Suzy Subways, who's helping draw attention to local issues during the DNC with a newspaper called the UnConventional Times.

SUZY SUBWAYS: Hi. This is the UnConventional Times. This is a newspaper that we put together to cover some of the issues related to what the Democrats have done with their policies that have harmed people here in Philly and all over the world. So, for example, our new mayor promised to end stop and frisk, and he just kind of decided not to, you know, once he got into office a few months ago, for example. And so, that’s relevant to the protests here today.

LAURA GOTTESDIENER: And I see some of the headlines: “Four More Years with the Democrats Pushing People Out: How the Democrats Have Used Gentrification to Change the Face of Philly” and then “Who Will End Racist Policing and Prisons? Not the Democratic Party.” Can you talk about sort of your goal with this newspaper and then how you guys put it together?

SUZY SUBWAYS: Yeah, our goal was really to explain and start conversations with other Philadelphians about why we’re protesting, because sometimes it can be confusing, it can be chaotic, and people are curious, and they want to know why we’re protesting. Also, why are we protesting the Democrats, when Trump is so scary? So, we want to really get into detail with a lot of facts. We did very thorough fact checking. We researched this incredibly thoroughly. And so, we got statistics and covered basically how the Democrats, who have always—for a long time controlled Philadelphia, for decades, how they have harmed Philadelphia. For example, the tax abatements that have been given to wealthy corporations, basically giveaways to like Comcast to build their skyscraper, tax abatements to wealthy property owners who move here, and meanwhile, the housing waiting list for public housing, you could wait like 10 years on the waiting list, and it just gets longer and longer, and the rents are going up. So, that’s one of the issues we wanted to cover. And the fact that Mayor Kenney broke his promise to end stop and frisk is a very serious issue here in Philadelphia. We had six police officers who got their jobs back after they had egregious lists of brutality and just like corruption, like very bad drug corruption. And they just got off and got their jobs back. And that’s business as usual here in Philadelphia.

LAURA GOTTESDIENER: Can you talk about the process? Who put this together?

SUZY SUBWAYS: Oh, yeah. This was actually put together by some friends who know each other just because we’re all journalists. And we donated our time, you know, after work and put it together over a period of a few weeks or a month. Four of us were co-editors. And we worked with a lot of volunteer writers. And we did, you know, like I said, a ton of fact checking and also editing, made things fit nicely. We also worked with a local artist named Beth Pulcinella, who made some original artwork. For example, there’s this—sorry, I’m so sorry—she made a poster. This is an open invitation for people to join us in these protests, because we don’t want to just talk to people who are already here. We want to welcome everyone, in Philadelphia and anywhere who can—anyone who can come here to join and say, “We want justice.”

LAURA GOTTESDIENER: And it says—can we read it? “Power concedes nothing without a demand. This is an open invitation.” Can you show us some of the other articles on the inside?

SUZY SUBWAYS: Sure. Yeah, so, this first article on the inside is about the year that the Democratic Party broke? So, basically, Ed Rendell, when he became mayor in 1992, he cut the wages of all the city workers in order to balance the city budget, because we were in debt. I was in high school at that time. So, basically, he balanced the budget on the back of workers and blamed them and said that they were lazy. So this was the first neoliberal mayor of Philadelphia. And ever since then, that’s what we’ve been dealing with.

And then, let’s see, we put these little bits. “Protest: It Works,” and the two people doing the high five, with examples of how protests have gained victory, like the Fight for $15, Occupy Wall Street, Movement for Black Lives.

Then, this is about the homeless situation here. The city gets more and more money every year to provide shelter beds and homes for people. They’ve been getting more money from the federal government, and there are fewer beds. So, there’s something wrong with the priorities, and we really wanted to expose that.

We also have this timeline of various things that the Democrats have done that we don’t want anyone to forget, like the—Bill Clinton’s broken promises to the AIDS community, the 1985 bombing of the MOVE family by Mayor Wilson Goode, who was a Democrat.

LAURA GOTTESDIENER: And that was here in Philadelphia.

SUZY SUBWAYS: That’s right. And like, you know, people died. Children died in that. And they used a real bomb. The police told the firefighters not to put the fire out. Then there—

LAURA GOTTESDIENER: And then you can 1994, the crime bill; 2002, the vote as long—along with Hillary Clinton, voted to support the use of force in Iraq. What does the 2016 one say?

SUZY SUBWAYS: Oh, so this is about—President Obama is spending—well, it will be over the next 30 years—$1 trillion to upgrade the nuclear arsenal.

LAURA GOTTESDIENER: And what does the editorial say to the readers?

LAURA GOTTESDIENER: And it says, “This one-time newspaper is affiliated with the DNC Action Committee and grew out of its meetings but is not endorsed by it. We’ll be out there with you!” And this is—and can you read the editors?

LAURA GOTTESDIENER: And is there anything else you want to show us from the inside?

SUZY SUBWAYS: This drawing was created by a local artist, Beth Pulcinella. It’s a drawing of toddlers at a family detention center, where—

LAURA GOTTESDIENER: Is that the Berks detention center here in Pennsylvania?

SUZY SUBWAYS: That’s right, and it’s not very far from Philadelphia. And a lot of these—a lot of women and children have had to escape their home countries because violence has increased, especially in Honduras after the coup that Hillary Clinton supported. So we wanted to document that. And I don’t think a lot of people in Philly are aware that small children and women are being held in basically a prison. So this drawing is after a description by a lawyer who went to the Berks detention center. They are not allowed to take photographs, so she described actually seeing these toddlers who have signs on them, because they had visitors, so the mothers put signs on them saying “We’re treated badly,” “We want freedom.” And so, we don’t have a photograph of it, but Beth drew this beautiful drawing, and it really tells you what’s going on.

LAURA GOTTESDIENER: Can you read the placards that the children are wearing?

SUZY SUBWAYS: Yeah, the first one says “Nos tratan mal,” which means “They treat us badly.” The second one is “Libertad por favor,” “Freedom please.” And this one is in English. It says “Keep my family together.”

LAURA GOTTESDIENER: And do you have any message for the DNC? We’re standing maybe a few miles away from the convention center, over at the Wells Fargo Center. Is that correct?

SUZY SUBWAYS: That’s right. I think that people have an opportunity there to expose the fact that the Democrats are pretty much owned by Wall Street. They do the bidding of the rich corporations. And so, it’s not real democracy. If they want to be a Democratic Party, they should be more democratic. 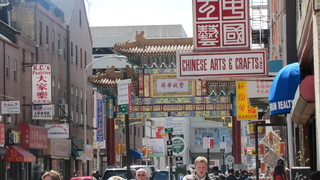