As the the Democratic National Convention gets underway today in Philadelphia, residents and elected officials hope to bring attention to the city’s Chinatown, one of the last low-income communities of color in the Center City corridor. Over the last few decades, the area has lost a third of its housing and half of its land to development projects, “urban renewal” and gentrification, which threatens to displace residents. But for the past 15 years, Chinatown’s residents have organized and fought back. They’ve successfully fended off a plan to build a $600 million baseball stadium, and pushed back on a proposal to put a casino in the heart of Chinatown. We speak with longtime community activist Helen Gym, who was recently elected to the Philadelphia City Council, the first Asian-American woman ever to serve on the council.

AMY GOODMAN: We are “Breaking with Convention: War, Peace and the Presidency.” I’m Amy Goodman, with Juan González.

JUAN GONZÁLEZ: Well, the nation’s spotlight is on Philadelphia as the Democratic National Convention gets underway today. Fifty thousand visitors are descending upon the city, including delegates, the media and activists. Many will seem out well-known historic sites such as the Liberty Bell and Independence Hall, just a couple of blocks away from here, site of the signing of the Declaration of Independence and the U.S. Constitution.

But local residents and elected officials hope to bring attention to a lesser-known site in the City of Brotherly Love: Philadelphia’s Chinatown, one of the last low-income communities of color in the Center City corridor. Over the last few decades, the area has lost a third of its housing and half of its land to development projects, to urban renewal and to gentrification, which threatens to displace residents.

AMY GOODMAN: But the last 15 years, Chinatown’s residents have organized and fought back. They’ve successfully fending off a plan to build a $600 million baseball stadium, and pushed back on a proposal to put a casino in the heart of Chinatown.

Well, for more, we’re joined by longtime community activist Helen Gym, recently elected to the Philadelphia City Council, the first Asian-American woman ever to serve on the council.

HELEN GYM: Thank you so much.

AMY GOODMAN: So, you have a big event taking place here, the Democratic convention. How does it profit Philadelphia? And talk about these struggles you’ve been involved with. You’re our tour guide for the whole world right now for Philadelphia.

HELEN GYM: Absolutely. Well, I mean, I think it’s amazing to have the eyes of the nation on our city. We’ve wanted them to be on the city for a long time. Philadelphia is the poorest large city in the country. We’ve got a lot of vibrant, active organizing from communities that are deep in our housing movement, in our disability rights movement, in our immigrant rights movement. And we’re hoping that while the mainstream media’s attention may be on the Wells Fargo stage, for good reason, that there will be a lot of democracy in our streets, as well, that there’s a lot of great organizing that’s happening in our city, that it’s birthplace of democracy—it’s great to have it being created in our communities and in our streets, and not just in our politics, as well.

JUAN GONZÁLEZ: And tell us something about this long grassroots struggle to preserve the Chinatown community here. And that’s how you first became really well known in the city of Philadelphia.

HELEN GYM: That’s right. Thank you so much, Juan. I mean, we—I mean, it’s wonderful to be in a city that has such a vibrant Asian-American movement here. It came out of a 1970s ethnic power and black power struggles with a newspaper called Yellow Seeds, that was kind of the birthplace of a lot of radical thinking within Asian-American groups and really was invested heavily in trying to think more broadly about Asian America rather than just a census category that we have right now, but in a deeply political movement. And for many of us, the battleground was Chinatown, because it was one of—a home, an immigrant place for many Asian Americans in Philadelphia, that there weren’t that many places that we are struggling to find language access, refugee resettlement, that this was a place where we could have those conversations.

But like most major urban cities in the 1970s and on, Chinatown and other places were targeted for massive urban renewal projects, that were really meant to kind of whitewash out things and redevelop for an urban corridor that wasn’t really meant for a lot of diverse communities and families. We had lost a lot of communities in that process here in Philadelphia. Chinatown learned from that struggle. So we pushed back. We’ve gotten very organized. And through those types of struggles that have put us at the forefront, we’ve been able to talk about Chinatown more than just a place to get dim sum and restaurants and places like that, but as a vibrant community of people who deserve to have access to public education, who want to talk about immigrant rights issues, who have important conversations about workers’ rights, as well.

AMY GOODMAN: Speaking of education, your activism really began around being a parent and a public education activist. Can you talk about what’s happening here in Philadelphia, and also relate it to the Democratic Party platform and the Republican Party platform, if you will? Talk about the major candidates’ positions on education?

HELEN GYM: Absolutely. Well, so, not only is Philadelphia the poorest large city in the country, we’re in a state that has the worst funding gap in the nation between the poorest school districts and the wealthiest school districts. And those two factors, poverty and inequality, are at the heart of the education justice struggle here in Philadelphia. We’re 16 years post the state takeover of the Philadelphia public schools, that has basically run it into the ground. Last year, there were thousands of schoolchildren that went to—that are going to go to summer school because they didn’t have a teacher in the classroom for the majority of the year. We’ve seen thousands of teachers stripped from our classrooms and from programs. We’ve lost nurses and counselors. Our kids struggle for water access in schools and in, you know, buildings that are in grave disrepair because we don’t put money into school construction. And we’ve closed 30 schools in a very short window of time.

So, these kinds of things have formed the basis of a lot of parents, youth, community members and educators, in particular, getting involved and engaged with the rethinking out of a public institution that we think is core to our city’s revival. It’s great to look at Center City and see all these really great buildings and construction going up and new homes, and Philadelphia’s, you know, growth has been reversed after five decades of population decline, in part because we have new birth rates and immigrants coming in, but both new families and immigrants need public schools. And if we don’t give them to them, we’re not going to see that happen. So—

JUAN GONZÁLEZ: Quickly, the state took over the running of the public schools supposedly to improve them—

JUAN GONZÁLEZ: —but has there been any improvement? And also, there’s been a huge growth in charters schools, as there has been all around the country.

HELEN GYM: Yes. So, in 2001, the state took over the Philadelphia public schools. At the time, they wanted to give Philadelphia, as the largest school district, over to a for-profit management company called Edison Schools Inc., which no longer exists, in fact. And, you know, in between, we’ve been subjected to all manner of experimentation and reckless, in my mind, reckless privatization of our—of a very central public institution. We have one of the larger school—charter school expansion systems in our city. It has not stabilized things for our public schools. It hasn’t necessarily led to more financing or more money, that is, more resources going into our classrooms. And so, we have a big struggle right now between, you know, a massively expanding system, but at the private end and on the individual single school model. We’re looking at an investment in a public school system overall.

The encouraging thing is, is that the Democratic Party has starting to shift around this a little bit. And I think that has a lot to do with the movement and organizing of people on the ground. So, there’s been a huge pushback on high-stakes testing—those led to the closing of our public schools, teacher evaluations, that are leading to high turnover in our teaching force. So, for the first time, the Democratic Party has made a very clear statement that high-stakes testing shouldn’t be used for teacher evaluations and to make school-closing decisions. And they’ve also started to push back on charter schools, that there is a support for charter schools, but not at the expense of the traditional public school. And that is a very, very important distinction to make.

AMY GOODMAN: And the Democratic platform, how it jibes with the kind of work that you’re doing here in Philadelphia?

HELEN GYM: It’s evolving. So, you know, we’re clearly much further along. We need to see a huge investment in our public education system. I would like to see an invigorated Department of Education that goes in and does investigations all across the nation about funding gaps and inequities, that we’re seeing and experiencing on the ground. This is not just a states’ problem. This has got to be the federal government coming in and very clearly showing how black, brown and immigrant children in our country are not getting the access to basic levels of resources that their counterparts should get in a public education system. Furthermore, I think that there needs to be a more aggressive investigation around how privatization is working, that we’ve got lots of problems, questions and corruption investigations that are going on. We need to take that very, very seriously. It’s federal money that’s going in. We take it seriously in our politics. We should take it seriously in our education system, too.

AMY GOODMAN: Helen Gym, thank you so much for being with us.

“We Want to Stop Fracking Now”: Up to 10,000 Rally on Eve of DNC to Demand Climate Justice

NEXT“We Want to Stop Fracking Now”: Up to 10,000 Rally on Eve of DNC to Demand Climate Justice 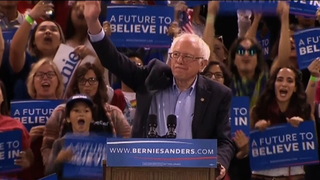