WikiLeaks founder Julian Assange spoke via video stream at the Green Party convention in Houston, Texas, over the weekend. Assange has been confined to the Ecuadorean Embassy in London for more than four years, fearing that if he were to attempt to leave, he would be arrested by British police and ultimately extradited to the U.S., where it is believed there is a sealed indictment against him over WikiLeaks’ release of documents. Assange was speaking with former Green Party presidential candidate David Cobb. He began by speaking about WikiLeaks’ release of 20,000 internal DNC emails.

AMY GOODMAN: That’s Green Party vice-presidential nominee Ajamu Baraka speaking at the Green Party convention in Houston on Saturday, as did WikiLeaks founder and editor Julian Assange. He was interviewed via video stream by former Green Party presidential candidate David Cobb. Julian Assange has been holed up in the Ecuadorean Embassy in London for more than four years, fearing that if he were to attempt to leave, he would be arrested by British police and ultimately extradited to the United States, where it’s believed there’s a sealed indictment against him over WikiLeaks’ release of documents. David Cobb started by asking Julian Assange about the recent DNC email leaks.

JULIAN ASSANGE: We published 20,000 [inaudible] emails from the DNC, from Debbie Wasserman Schultz, from the communications director, Luis Miranda, from the chief financial officer and so on, and also communications [inaudible] and to the Hillary Clinton campaign and a number of other groups. What they show is not only was there a sort of internal view or discussions about how to undermine Bernie Sanders and support Hillary Clinton—not surprising, given that Debbie Wasserman Schultz used to work for Hillary Clinton’s campaign—but rather, there were formal instructions made to DNC staff to execute a campaign of black propaganda against Bernie Sanders. For example, Luis Miranda, the communications chief, instructed his staff to put out, in a, quote, “unattributable manner,” allegations that Bernie Sanders’ supporters were engaged in acts of violence. Similarly, there was discussions to expose—or, rather, claim that Bernie Sanders was an atheist and that this would harm him in the South, to use his religious beliefs, or, rather, his lack of religious beliefs, against him.

Yeah, so, then there’s aspects to do with how financing was being bounced around between the DNC and the state parties and the Hillary Clinton Victory Fund. To my mind, I think the most ongoing interesting material, which has been picked up by—now, by a wide range of state-based investigative journalists in the U.S., is the influence-peddling structure of the DNC—who goes to what private conventions at particular people’s houses with Barack Obama or with the vice president, Joseph Biden, and the sort of—some of the things that they get into—get in exchange, for example, being put on federal government boards and commissions.

The third big revelation that comes out, which is—I didn’t mention it, because, as someone who’s having to deal with the media all the time, I understand how real this is, but the general public is—it is proof of something important, which is the direct connections between the Hillary Clinton faction in the DNC and the president of MSNBC. For example, Debbie Wasserman Schultz called up the president of NBC in order to haul Morning Joe into line, because they were speaking about the bias of the DNC. Talking points were constructed for Jake Tapper, for example, on CNN. Of course, we don’t know whether he was willing to use them. He has denied that. But at least from the DNC end, they constructed the questions that he was to ask them, even saying—watching coverage live and calling up the networks to say, you know, “Put a stop to that chain of communication right now.”

DAVID COBB: Julian, Greens, like most Americans, are grateful for people and organizations that inform and expose illegal or illicit activity on the part of government. That is the very definition of a whistleblower, blowing the whistle on crime. And yet, the U.S. government, under President Obama and Secretary of State Clinton, has prosecuted more whistleblowers than all past presidents combined, and sought and obtained longer jail sentences than previous presidents. Why do you think that is true? And what lessons can be learned there?

JULIAN ASSANGE: Well, I’m afraid it’s much worse than that. The Obama administration has gone after more whistleblowers using the Espionage Act not only than all previous presidents combined back to 1917, when the act was first passed in World War I to deal with World War I spies, but, in fact, now three times as many. So this is really an epidemic to abuse the national security law in order to stop whistleblowers and journalists and publishers. So the attempted prosecution, the pending prosecution of WikiLeaks in the United States, uses the Espionage Act, uses a computer terrorism act, etc. etc. But the same act, the 1917 Espionage Act, was used to go after and obtain subpoenas in relation to a Fox News reporter reporting on information allegedly obtained from the State Department, similarly going after Associated Press’s telephone call records.

So, it’s a—you know there’s a galloping epidemic of abuse of national security law under this Democratic administration, which Hillary Clinton was part of. She and Obama were involved in placing one of my alleged sources, Chelsea Manning, into prison for 35 years, only for communicating truthful information to the public. There’s no other allegation, no allegation about working with spies or anything like that, just communicating truthful information to the press and to the public. That situation is so bad. Chelsea Manning was tortured in prison—it’s a formal finding of the U.N., even a finding by the U.S. military justice system that illegal punishments occurred during imprisonment. And just a week and a half ago, unfortunately, she attempted suicide because of the difficulty in the conditions. 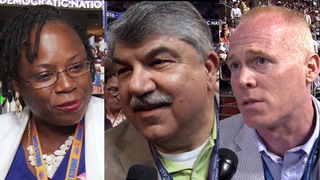