During the Green Party convention in Houston, Texas, over the weekend, WikiLeaks founder Julian Assange spoke via video stream about his book “When Google Met WikiLeaks” and the relationship between Hillary Clinton, the State Department and the internet giant Google.

DAVID COBB: I’m reminded of the great political philosopher Lily Tomlin, who said, “No matter how cynical I get, it’s hard to keep up.” Julian, Greens, like most Americans, are disgusted by the collusion between Wall Street, multinational corporations and our own government. We know, as most Americans do, that these large corporations are no longer merely exercising power, they are literally ruling over us. In your book, When Google Met WikiLeaks, you describe, quote, “a special relationship,” end-quote, between Google, the U.S. State Department and Hillary Clinton. Could you talk about that, please?

JULIAN ASSANGE: Well, I just want to correct, very quickly, some false reporting. So, very interestingly, when we published the DNC leaks, The New York Times, which has picked its favorite candidate, as has Bloomberg, which is Hillary Clinton, said that I intended to harm Hillary Clinton. This is what we’ve been doing for 10 years. It was a completely fabricated story by Charlie Savage. OK.

But, yes, we are very interested in power and publishing the truth about power, so people can work out however they choose to reform power. And so, Google is a kind of new power on the block, so we are interested in it, and we’re also interested in Hillary Clinton, when she was secretary of state and now, I mean, the presidential candidacy. So, these two powers have merged at a kind of personal level and political level, and even, to a small extent, at the organizational level. So, that book, written three years ago, has been proved to be very prescient.

The chairman of Google, who was the CEO of Google, Eric Schmidt, has started, about a year ago, a company to run Hillary Clinton’s digital campaign. Google has been to the White House, on average over the last four years, once per week—more than any other single company. It spends more money lobbying Washington, D.C., than any other single company. Hillary Clinton’s former staffer, Jared Cohen, was hired by Google in 2009 to head up Google’s internal think tank. There’s a lot of other interconnections between Google and the state. Eric Schmidt is now also, at the same time as being chairman of what is now Google’s parent company, Alphabet, is chairman of the Pentagon innovation board.

So you have a connection between Google, the Clinton campaign, which will be almost certainly the next White House, and the Pentagon. And this triangle is extremely worrying, because, as time goes by, Google is understanding that it does have an ability to influence election campaigns. It’s also bought more than 10 drone companies. It’s integrating its mapping data in order to better be able to fly and navigate drones around the world, is expanding into every country in the world.

And it has a very strange, quasi-religious vision of the future, of this vision of the singularity. It’s really a—I’ve done research that it’s very disturbing what they believe in Silicon Valley, that they believe they can create a massive artificial intelligence, more powerful than any human being or any society’s ability to think. And, of course, we all know what happens when such power is in limited hands.

And so, Google in the White House will be, essentially, an unregulatable company. It’s a question whether it’s already unregulatable, but you can—you can just completely forget about any kind of antitrust legislation being used on Google if there is a Hillary Clinton White House.

DAVID COBB: Julian, I’m reminded that Benito Mussolini, the fascist dictator, said that fascism more appropriately should be called corporatism, because it merges the private power of corporations with the military might of the nation-state. And, of course, he thought that was a good thing. It occurs to me that you were describing our newer, kinder, gentler, smiling face of fascism, where all of the information that we receive is controlled by that same collusion between government and major transnational corporations, and now our ability to even talk to myself, or ourselves. Am I being overdramatic, or do I understand you correctly?

JULIAN ASSANGE: Well, it could be both. It could be both. No, it is—it is possibly the most serious issue. The potential threat of nuclear war, I think, is perhaps the other one. Yes, there is a merger going on at a rapid pace between the largest American corporations and the traditional aspects of the U.S. state, the military intelligence aspects. I mean, that’s been there for a long time, frankly, with Northrop Grumman, General Dynamics, General Electric, etc. But this is a new generation. And Eric Schmidt wrote in his book about Google and the world that what Lockheed Martin and other aerospace companies were to the 20th century, high-tech companies will be to the 21st century. And that’s very much their vision, to integrate with Washington, to prevent antitrust regulation and to be part of that family of traditional D.C.-mediated power.

DAVID COBB: Julian, Greens, like most Americans, have been horrified to learn—and, for many of us, have it objectively collaborated—that multinational corporations and wealthy oligarchs are literally directing U.S. foreign policy. So I have a question for you, because of your unique vantage point: What advice, if any, would you give the next president of the United States about how to shift that policy, given the reality that she might be facing?

JULIAN ASSANGE: Well, that’s a very interesting question. Does it make any difference who is president or not? A very, very interesting question. It certainly doesn’t make as much difference as people say. What really makes a difference is what the environment is in which the president has to work. And that is the environment of critique, on the one hand, to how free the media is, how much opposition organizations are doing their job in holding government to account. And it’s the economic and corporate environment, and then, to a degree, the international foreign affairs environment. And the president is much more a spokesperson for these forces around them.

Where they do make a big difference is in their initial appointments, so the people that they choose to fill those spots in government that then reactively makes policy. But as you can see with Barack Obama, most of the time is spent reading out teleprompters. There’s just not enough time to do much else than be a spokesperson for these groups. So, what is happening now, with the Green Party and Gary Johnson and the Bernie Sanders campaign and so on, is very, very important, but it must be seen past the moment, past this political moment. That’s a moment to build a movement and build pressure. And having built it, then one can discipline and hold to account and check the abuses of government during the next four years.

AMY GOODMAN: WikiLeaks founder Julian Assange speaking at the Green Party convention in Houston, being interviewed by former Green Party presidential candidate David Cobb. Assange’s books include When Google Met WikiLeaks, which is based on Assange’s meeting with Google CEO Eric Schmidt five years ago, when Assange was under house arrest in England, before he was granted political asylum in Ecuador, now living in the Ecuadorean Embassy in London, afraid if he steps foot outside, he’ll be arrested and ultimately extradited to the United States, where there, it is believed, a sealed indictment against him for WikiLeaks. We’ll be back with more of the conversation between Julian Assange and David Cobb in a minute.

Julian Assange on the Green Party’s Rising Popularity & the November Election: “Anything is Possible”

NEXTJulian Assange on the Green Party’s Rising Popularity & the November Election: “Anything is Possible” 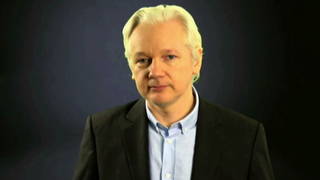