Tariq Ramadan on Medina Bombings: Saudi Regime is Not a Victim But Perpetrator of Regional Violence

The king of Saudi Arabia has promised to strike with an “iron hand” against those responsible for a suicide attack near the Prophet’s Mosque in Medina on Monday. Militants carried out three separate suicide bomb attacks across Saudi Arabia on the same day, including an attack in the holy city of Medina that killed four security officers near the mosque where the Prophet Muhammad is believed to be buried. The mosque is one of the holiest sites for Muslims worldwide. No group has claimed responsibility for Monday’s attacks, but the self-proclaimed Islamic State has carried out similar bombings targeting Shia Muslims and Saudi security forces. The Sunni Muslim militant group has called for the overthrow of the Saudi monarchy. To talk more about the significance of these attacks, we’re joined by Tariq Ramadan, professor of contemporary Islamic studies at Oxford University.

JUAN GONZÁLEZ: The king of Saudi Arabia has promised to strike with an “iron hand” against those responsible for a suicide attack near the Prophet’s Mosque in Medina on Monday. Militants carried out three separate suicide bomb attacks across Saudi Arabia on the same day, including an attack in the holy city of Medina that killed four security officers near the mosque where the Prophet Muhammad is believed to be buried. The mosque is one of the holiest sites for Muslims worldwide. An earlier attack was carried out near the U.S. Consulate in the Saudi city of Jeddah. Two security officers were wounded. Another bombing took place near dusk outside a Shia mosque in a mainly Shia eastern city of Qatif. No group has claimed responsibility for Monday’s attacks, but the so-called Islamic State has carried out similar bombings targeting Shia Muslims and Saudi security forces. The Sunni Muslim militant group has called for the overthrow of the Saudi monarchy.

AMY GOODMAN: And now the Saudi Interior Ministry spokesman identified the assailant in the Jeddah attack as a 35-year-old Pakistani expatriate called Abdullah Qalzar Khan. According to the ministry, Khan worked as a private driver in the city for 12 years. The attacks were carried out as people were preparing for the Eid al-Fitr celebrations to mark the end of the holy month of Ramadan. Tariq Ramadan, as you talk about what happened in Saudi Arabia, can you talk, specifically to an audience who is not so familiar with the religious significance of all of these places, about not only the attacks, but the Saudi government’s response?

TARIQ RAMADAN: Look, first, from an Islamic perspective, it’s something which is completely against the Islamic principles, and especially to target the holy city of Medina, the messenger city. It’s known as al-Madinah al-Munawwarah, which is the illuminated and illuminating city for the Muslims. So, first, this is against the basic principles.

The second thing which is also very important from what is happening is that now we have the Saudi regime saying we are going to be very tough on these. The problem that we have, which is internal to the Islamic reference and the Islamic trends, is that the type of Islamic interpretations that we have in Saudi Arabia, called Wahhabism or Salafi, as they call themself, is very literalist. So, in fact, they are creating a mindset which is very dogmatic—”it’s us versus them”—that is instrumentalized by more violent extremist groups going as far as being violent. So, there is a gray area between the two interpretations or ideologies. Now, what we are going to see is the Saudi regime being very tough with—you know, on the name of—in the name of suspicions towards anyone who is going to speak out. But we also have to say that this is not new. This regime is very tough with any type of opposition. Remember, during the time of the Arab uprisings, we had a mufti saying to the Muslims it’s against Islam to take into the street against the regime.

While, you know, what we also have to say as Muslims—and this is why it’s a shared responsibility. All what was said by Tariq Ali and Sami Ramadani about the Western policies and the visions and the contradictions with our own values in the West, this is right. But at the same time, it’s very important for Muslims and for the Muslim voices to be vocal about the contradictions that we have with the Saudi regime. It’s not because I’m condemning what is happening and the terrorist attacks now and the violent extremists, that we have to condemn and we have to be vocal, that we should end up supporting a regime where there is no freedom of expression, there is a very narrow type of interpreting the scriptural sources, there is a very tough regime—no freedom, no women’s rights. And I think that, on this, we should not be on the side of the victims and taking the Saudi regime as the victim of what is happening. They are, in fact, instrumental in all what is happening in the region. And there is one thing that we cannot deny, that it’s part of the message sent by the violent extremists, is that Saudi Arabia, it’s in fact connected to great powers and playing a role in security, in monitoring, in the lack of freedom, in torturing the people, which is a very dirty role. And we have to say it, and we have to be clear on this as Muslims, as people who are now promoting and who want democracy for the Muslim-majority countries and a more consistent policy in the region.

JUAN GONZÁLEZ: And, Tariq Ali, what about this particular and complex role of Saudi Arabia in the Middle East and in the various conflicts in the region?

TARIQ ALI: Well, Tariq Ramadan is perfectly right on this. I agree with him. This is nothing new, by the way. It started during the Cold War, when the United States used the Saudis to help get Wahhabi scholars, extremely rigid in their philosophical view of Islam, like the equivalent of some born-again Christian sects in the United States, and they were sent all over. They were sent to Indonesia. They were sent to Pakistan. Of course, they existed in the Arab world to a certain extent. And the aim was to fight communism. And they did it, and they helped, and they have grown stronger and stronger.

And the main jihadi organizations, so-called, are very influenced by Wahhabism and believe in it, and they are ultra-sectarian not just to other Sunnis, which we know, as they kill them endlessly, but they regard the Shia as heretics, not part of Islam, which is why they attack Shia mosques, why they kill Shia people, why they target Shia clerics, etc., etc. So, this disunity is linked very strongly, I think, to the role which the West has played in the region and which they recently—only most recently, in Iraq, armed some of the Shia clerics to attack the Sunnis. They engaged in ethnic cleansings in the middle of Baghdad. They’ve created absolute havoc, the Sunni-Shia divide, which existed, but on a very mild level. There were intermarriages even. The political parties had mixed central committees of Shia, Sunnis, Christians, others. That has also been wrecked by the American occupation of Iraq. And it’s—what we are witnessing is the balkanization of the Middle East, which is why these monstrous groups spring up. They spring up, these monster groups, and no one can do anything about them because they’ve partially created them.

AMY GOODMAN: Tariq Ramadan, what do you think the response should be?

TARIQ RAMADAN: I think, first, that what we heard from Tariq Ali, it’s very important—and, once again, nothing new. In fact, if you look at the American policy in Latin America, it’s selling weapons on both sides and letting people go for fighting, making money out of it and getting the advantage through the security. So I think that, here, what is important for us first is to disconnect, in a way, this violent extremism from, you know, the qualification of being Islamic. And this is why—I’m not saying that it has nothing to do with Islam. I disagree with the people who are saying, “No, it has nothing to do with Islam.” We are dealing with people who come—who are quoting the Qur’an. We, now, around the world, the Muslims, should be clearer, not only on the violent extremists, but you can’t just be against the violent extremists on religious—on the religious side and not understand that it has to do with a political stance that we need to have. And the political stance is, first, against all the dictatorships in the region—to be clear, on all the Gulf states—that they are now playing a role supporting the American policies or the European policies, and sometimes torn apart—they are torn apart between Chinese and Russian interests and the West. This is where we need something—you know, we were all celebrating the Arab Spring. I was very cautious with this. I said, “Be careful, because there are not political reasons behind. They are much more economic reasons and geostrategic realities there.” So I think that, on this, we need to be clear on what we want for the Muslim-majority countries or for the Middle East, because now, it’s true, it’s the balkanization of the region. This is where we need to be quitely.

On our side, it’s important, in the United States, in the West, to have voices coming together. And once again, it’s not a Muslim business. It’s our business as citizens to come together and to be critical towards our own governments, because we cannot just sit down and cry when people are killed, not understanding that the policy is behind. And all what we have seen, which is not new, it’s still now counting the dead people, while others are making money out of it, because the destabilized Middle East, in the name of security, it helps the people to sell weapons—it’s not new—to get their interest in oil or in uranium or in lithium, as it were, in Afghanistan. So this is where we citizens, we have to wake up. We have to wake up. And if you see what is happening in my country here, in the U.K., with all the discussion that you had about Corbyn and the people who are playing, it’s called connected, because these are people who did what they did during the war, supporting the war, and now they are coming to talk about, you know, democratization and human dignity. That’s not acceptable for us. So this is what we need to do on both sides, so to speak.

NEXTU.S. Policies Have Not Changed: Banned Under Bush, Tariq Ramadan Speaks Out Against Obama & Clinton 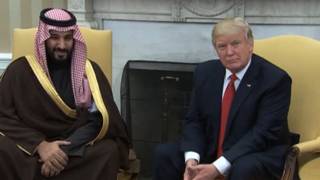