In Florida, State Attorney Angela Corey has been defeated in her re-election bid. Corey had faced widespread criticism for her handling of several prominent cases, including the killing of African-American teenager Trayvon Martin by white neighborhood watch vigilante George Zimmerman and the case of Marissa Alexander, who was sentenced to 20 years in prison for firing what she maintains was a warning shot at her abusive husband. For more, we speak with freelance journalist Victoria Law. Her recent piece for The Nation is “Why Is Marissa Alexander Still Being Punished for Fighting Back.”

AMY GOODMAN: On a semi-related issue, I wanted to ask you, Victoria, about the piece you wrote in The Nation, “Why Is Marissa Alexander Still Being Punished for Fighting Back?” the famous case of the woman who fired a warning shot at her abusive husband. She was sentenced—what was it?—to 20 years in prison.

AMY GOODMAN: This was right around the time of Trayvon Martin. Now, the prosecutor, state attorney in Florida’s Fourth Judicial Circuit Court, Angela Corey, was just defeated in yesterday’s primary.

VICTORIA LAW: Yes. We can see that oftentimes, as we see in—as, hopefully, we do not see in Bresha’s case in the end, but as we see with many domestic violence survivors, that when they take actions to protect themselves, and almost always it’s self-defense, even if it’s not happening in the heat of the confrontation, but they see something in their abuser’s eyes, and they say, “This is it. You know, if I don’t do something, I’m going to end up dead. He is going to kill me.” And we see that prosecutors tend to go after them. Domestic violence is often dismissed as, quote-unquote, “the abuse excuse.” It’s disregarded. There is still not widespread recognition of the ways, the insidious ways, in which domestic violence works. So, they might say, “Well, why were you afraid of him if you weren’t being hit all the time?” And after a while, it’s not just the physical violence, it’s the threat of physical violence; it’s being conditioned to fear your loved one and to do what you need to do in order to avoid violence.

But we see, with Angela Corey charging Marissa Alexander, prosecuting her, and adding, at her discretion, the mandatory sentencing that allowed her to be sentenced to 20 years in prison, and then, when Marissa Alexander won her appeal, going after her again and threatening her with a 60-year sentence for firing a warning shot, in which no one was hurt and no one was killed—we see this again and again. What’s unusual with Marissa Alexander is the outpouring of support she got.

AMY GOODMAN: And this is the same prosecutor who was in charge of the prosecution of George Zimmerman, who got off.

AMY GOODMAN: I want to thank you all for being with us. We’ll continue to follow Bresha’s case. Victoria Law, we’ll link to your pieces. Martina Latessa, thanks so much for being with us, Cleveland police detective in the Domestic Violence Unit, who is the aunt of Bresha, and Ian Friedman, her criminal defense attorney.

This is Democracy Now! When we come back, speaking of primaries yesterday, we’ll look at the primary results in Florida and in Arizona and in other places, with Jim Dean, head of [Democracy] for America. Stay with us. 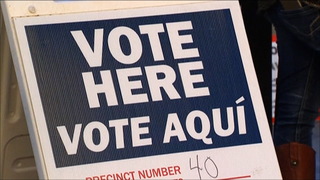 “They Knew What was at Stake”: 2016 Latino Voter Turnout Higher for Clinton Than for Obama in 2012