Part 2 of our conversation with Chase Strangio, staff attorney at the ACLU. He’s speaking to us from Washington, D.C., but earlier this week he was in North Carolina, where the ACLU is suing to overturn the state’s new anti-LGBT law. The law nullifies ordinances protecting LGBT people from discrimination and prohibits transgender people from using the bathroom that matches their gender identity.

AMY GOODMAN: This is Democracy Now!, democracynow.org, The War and Peace Report. I’m Amy Goodman, as we turn to Part 2 of our conversation with Chase Strangio, staff attorney at the ACLU. He’s speaking to us from Washington, D.C., but earlier this week he was in North Carolina, where the ACLU is suing to overturn the state’s new anti-LGBT law. The law nullifies ordinances protecting LGBT people from discrimination and prohibits transgender people from using the bathroom that matches their gender identity.

Chase, talk about the hearing on Monday.

CHASE STRANGIO: Yeah, thanks for having me. So, we finally had our first day in court in our challenge to North Carolina’s HB 2, which is the anti-trans, anti-LGBT law that was rushed through a special session in North Carolina in March. We filed our lawsuit along with Lambda Legal back in March, shortly after the law was first passed. And we’re seeking just to have the anti-trans bathroom portions of the law put on hold or enjoined while the case is going through the court system. And so, we finally had our day in court. Our plaintiffs were there. And we are arguing that the anti-trans bathroom portions of the law violate the Constitution and Title IX, which prohibits sex discrimination by educational institutions. So we had a three-hour hearing before the judge and an opportunity to present our case. And it was an exciting day for our clients, it was an exciting day for transgender people across North Carolina, to get to say publicly to the judge that this law is harming us, this law is dangerous, and this law needs to be overturned.

AMY GOODMAN: Did anything surprise you in the hearing? And what chronology now will happen, after you were in court on Monday?

CHASE STRANGIO: The hearing, you know, it was a long hearing, and the judge had a lot of questions. It was clear early on that he understood the harms of the law. He recognized that it would be untenable to force transgender individuals into bathrooms based on the sex that was assigned to them at birth. He had a lot of questions for the government about why this law was passed in the first place, what problems the law was attended to address. Counsel for Governor McCrory really had nothing to offer in terms of a reason why the law was rushed through a special session, costing the taxpayers close to $50,000. So that, that was a positive part of the hearing. And so, we’re hopeful that we’ll get a decision on this preliminary injunction in the next week or so.

But the case is also moving to trial on an expedited basis, so we will be back in Winston-Salem for trial beginning November 14th, challenging the full law, including the parts of the law that preempt local ordinances and that prevent local ordinances from extending protections to LGBT individuals. So there’s a lot more to happen in the case, but we’re hopeful that, particularly because of controlling precedent by the appellate court that essentially says it is a violation of Title IX to discriminate against transgender individuals when using restrooms and changing facilities, that we will get a positive ruling. So, hopefully, that will in come in short order. And we will continue to fight the full breadth of the law at trial this fall.

AMY GOODMAN: And what’s happening now? Can you explain so—about the law being in effect?

CHASE STRANGIO: So, in North Carolina right now, transgender individuals cannot use the restroom and locker rooms and other changing facilities that match who they are, unless they have a birth certificate that matches their gender identity. For many people, that’s impossible to obtain, either because laws prevent people from ever changing their birth certificates or laws require cost-prohibitive surgeries, that are not covered by insurance, before one can change their birth certificate. So the reality on the ground, for our clients, for example, is that they are essentially not going to the bathroom or holding in their pee or otherwise not, you know, drinking or eating to avoid having to go to the bathroom, until they can find a single-user facility or until they can get home at the end of the day. So this has real consequences for how people can engage in public life. If you have to plan your entire day around not finding a bathroom or finding a specific bathroom, it discourages you from, you know, going out into the world, engaging in organizing, engaging in employment. And that is the consequence of a law like that, and a law that the governor’s counsel himself admitted was solving exactly no problems.

AMY GOODMAN: I want to go to the conventions that took place in the last few weeks, you know, the Republicans in Cleveland and the Democrats in Philadelphia. This, the DNC. Speakers included LGBT rights activist Sarah McBride, who became the first openly transgender woman to speak at a major-party convention.

SARAH McBRIDE: Four years ago, I came out as transgender while serving as student body president in college. At the time, I was scared. I worried that my dreams and my identity were mutually exclusive. Since then, though, I’ve seen that change is possible. I witnessed history interning at the White House and helping my home state of Delaware pass protections for transgender people. … Will we be a nation where there’s only one way to love, only one way to look and only one way to live? Or will we be a nation where everyone has the freedom to live openly and equally, a nation that’s stronger together?

CHASE STRANGIO: Yeah, I mean, it was incredibly powerful to see Sarah up there. She is, you know, an incredible leader in the community. She is someone who speaks incredibly powerfully about the trans community. And one thing that she acknowledged in her remarks was that we have a responsibility as a nation to address many problems facing the LGBT community, and one of those problems is the violence against transgender women of color. So it’s powerful to have a transgender woman stand up there honoring and recognizing that the most imperiled in our community are the transgender women of color, who are fighting to survive just when they leave their house every day. And so, it’s important to note that Sarah’s presence, in and of itself, was important, and her remarks, drawing up the breadth of our community, can hopefully be a transformative in our understanding of the work to be done.

CAITLYN JENNER: It was easy to come out as trans. It was harder to come out as a Republican. Now, as far as social issues, because when I came out as being Republican, the community—I get it. The Democratic Party does a better job when it comes to LGBT community, the trans community, all that kind of stuff. And Obama actually has been very good from that standpoint, with just recently letting trans people serve openly in the military. They’re already there. Finally, they can serve openly. I think that’s a very good step for our community, for equal rights.

AMY GOODMAN: That’s Caitlyn Jenner at the Republican National Convention, though she wasn’t speaking on the floor. Chase Strangio?

CHASE STRANGIO: I think Caitlyn Jenner’s remarks sort of highlight the extent to which she’s wildly out of touch with the trans community in many ways, as a wealthy white trans woman with an unbelievable amount of access, talking about the difficulties of coming out as a Republican as opposed to the relative simplicity, in her mind, of coming out as transgender. And while that may be her experience, of course, we know, for the majority of transgender people, they’re facing systemic and interpersonal discrimination that means coming out can literally cause them to be murdered, that 17 transgender people have been murdered this year, most of them trans women of color. And so, while Caitlyn Jenner may be a mouthpiece for the Republican Party to talk about how it’s not really that difficult, I think, of course, the reality on the ground shows that, for the vast majority of transgender individuals, living life as a transgender person continues to impose incredible difficulties, from everything from walking down the street to getting a job to going to the bathroom. So, it is somewhat out of touch with the experience that we know is true for the vast majority of people in our community.

AMY GOODMAN: Finally, Chase, you recently tweeted about the murder of another transgender person of color, Skye Mockabee of Cleveland, Ohio. Can you talk about what happened?

CHASE STRANGIO: Yeah. So, unfortunately, again, last—earlier this week, we heard about another black transgender woman being murdered in Ohio, again being misgendered, called a man in reports by local media. She was the third black transgender woman murdered that week. And it’s part of a very concerning trend in which we are on pace to have more murders of transgender people this year than even last year, which was itself a record-breaking year. And I think what it tells us is that we have the intersection of systemic racism and systemic anti-trans laws, policies and internalized feelings that are literally compromising the lives of transgender women of color every day. And we have a responsibility as advocates for the trans community, we have a responsibility as human beings, to recognize this as the crisis that it is, and lift up the amazing organizers, the amazing leaders in our community, the black trans women who are fighting every day for survival and for their communities to survive. So we have a lot of work to do, and we have to hold up those that we have lost, and honor the amazing organizers who are keeping so many in the community alive.

AMY GOODMAN: Chase Strangio, I want to thank you for being with us, staff attorney at the ACLU, representing Chelsea Manning in a lawsuit against the Pentagon, also a lawsuit against North Carolina over what’s known as the bathroom bill, HB 2. This is Democracy Now! I’m Amy Goodman. Thanks for joining us. 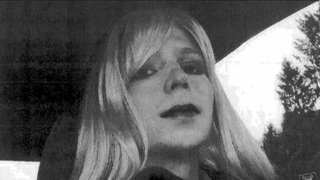