As protests continue over the police killing of Terence Crutcher, we look at how Tulsa, Oklahoma, is no stranger to racial strife. On May 31, 1921, a white mob killed as many as 300 people, most of them black, after a black man was accused of assaulting a white elevator operator. Over two days, white mobs set fire to homes, businesses and churches in Greenwood, a thriving African-American business district known at the time as the Black Wall Street of America. When the smoke cleared, the area lay in ruins. Many blacks left and never returned. The National Guard rounded up thousands of others and held them at various locations around the city. We speak with author and attorney Hannibal Johnson, who examines this history in his book, “Black Wall Street: From Riot to Renaissance in Tulsa’s Historic Greenwood District.”

NERMEEN SHAIKH: Well, we turn now to an incident that occurred in Tulsa a long time ago, on May 31st, 1921, when a white mob killed as many as 300 people, most of them black. The violence broke out when a white lynch mob clashed with blacks who were protecting a black man accused of assaulting a white elevator operator. Over two days, white mobs set fires to homes, businesses and churches in Greenwood, a thriving African-American business district, known at the time as the Black Wall Street of America.

AMY GOODMAN: When the smoke—when the smoke cleared, the area lay in ruins. Many African Americans left and never returned. The National Guard rounded up thousands of African Americans, held them at various locations around Tulsa. The U.S. Army, in what’s believed the first time, bombed Black Wall Street. This is an excerpt from a History Channel documentary, The Night Tulsa Burned, when some of the survivors, who were just children when the attack occurred, describe what happened. This is George Monroe, followed by Juanita Burnett Arnold and Ernestine Alpha Gibbs.

JUANITA BURNETT ARNOLD: We start hearing shots. And my grandfather told us all to get up. And we got up, and we could see smoke and hear—hear shots. And we couldn’t sleep or anything. We were just frightened nearly to death.

Welcome to Democracy Now!, Hannibal Johnson. Explain what took place almost a century ago and how that shapes Tulsa and black Tulsa today.

HANNIBAL JOHNSON: Tulsa was the site of the worst of the so-called race riots in American history in the early 20th century, May 31st through June 1st, 1921. And this is really emblematic of what was going on in America generally, because during that period lynching was prevalent. These so-called incidents that were dubbed race riots, but were really more adequately or appropriately described as assaults on black communities or pogroms or massacres, Tulsa bears the dubious distinction of hosting the worst of those so-called events. This is a period that historians and sociologists call the nadir of race relations in America, or the low point of race relations in America. And as a result of that, of that historical trauma, that history that needs to be healed, there has been a legacy of distrust, particularly among African Americans and whites in this community. And it’s—

HANNIBAL JOHNSON: Well, according to the most authoritative source on the bombing issue, the question is still an open question. There are eyewitnesses who say the area was bombed with kerosene and/or nitroglycerin bombs that caused the fires to rage more broadly. The official version is that there were, in fact, private planes that flew over the Greenwood community and that they were on reconnaissance missions, they were surveying the area to see what happened. So, the question is: Whom do you believe?

AMY GOODMAN: And it was called Black Wall Street because?

HANNIBAL JOHNSON: Black Wall Street really is a reference to the proliferation of black entrepreneurs that thrived in early Greenwood, and actually thrived even after the riot, because what’s remarkable is the people of Greenwood who rebuilt the community in the face of seemingly insurmountable odds after the utter devastation of the 1921 Tulsa race riot.

NERMEEN SHAIKH: Well, Hannibal Johnson, the current chief of police, Chuck Jordan, has made a public apology for the police department’s dereliction of duty in the Greenwood massacre. Could you talk about that?

HANNIBAL JOHNSON: Yes. About two years ago, Chief Jordan decided, on his own initiative, that it would be appropriate and helpful to the community, in terms of healing this history, to make a public apology for the police department’s role in the riot. The police and law enforcement, generally, during the riot, we know, deputized some of the white men who invaded the Greenwood community. And they generally did not fulfill their role of protecting and serving the African-American citizenry in Tulsa. So he felt it incumbent upon the department, in the modern era, to acknowledge that dereliction of duty, to apologize for it and to help us move forward. Now, what still remains to be done generally is taking appropriate reparations, making amends for the damage that was done, and working to reconcile, which means building relationships, engaging in dialogue, chipping away at systemic and institutional racism that exists here, as it exists everywhere.

NERMEEN SHAIKH: Well, very quickly, before we end, Hannibal Johnson, given Chuck Jordan’s apology for the Greenwood massacre, how has he responded to the recent shooting death of Terence Crutcher?

HANNIBAL JOHNSON: I think we’ve seen, generally, certainly at the front end, a unified front on the behalf of city leadership, including the mayor, the district attorney, the U.S. attorney, one of our counselors, who happens to be African-American. They’ve come forward, fairly quickly, and said, “We want to be transparent. We want the investigation to be full and fair. And we want justice to be done.” That is an appropriate and, I think, a trust-building type of statement to make at the outset. What remains to be seen is what follows that.

AMY GOODMAN: And the reason you feel the difference in the response in Tulsa and in Charlotte?

HANNIBAL JOHNSON: I think one of the things I love most about this city is the social capital that has been built over the course of the years. We have a very strong social infrastructure that involves nonprofits, community leadership organizations, a committed philanthropist, who work together regularly and collaborate on initiatives that build and better the community.

AMY GOODMAN: And finally, the Tulsa Race Riot Commission, that was set up like 16 years ago, in 2000, recommended reparations. What happened?

HANNIBAL JOHNSON: They recommended reparations of a number of varieties, including cash reparations for living survivors—that did not happen; cash reparations for people who lost property—that did not happen; the establishment of a scholarship fund—that did happen, for a limited time. They recommended economic redevelopment initiatives in Greenwood, set up a body to do that, but did not fund it, so that didn’t really happen. They recommended a memorial, and that, that did happen. What emerged from that was the John Hope Franklin Center for Reconciliation and John Hope Franklin Reconciliation Park, which is a beautiful park in the Greenwood area just across the Frisco tracks from downtown. So, some of what they recommended was done; other parts of it remain to be done.

AMY GOODMAN: And the number of people who it’s believed died in 1921 as a result of this attack on Black Wall Street?

HANNIBAL JOHNSON: So, the best estimate—the most credible source is that commission—and it’s likely somewhere between 100 and 300. And we’re not going to ever have a definitive number for a number of reasons. There are people who perhaps are buried in mass graves, and that’s still—there’s still a possibly of one or more mass graves here in Tulsa. Records were poor at the time. So, for a number reasons, getting an accurate count is virtually impossible. But what we do know is that the count that was issued at the time, the official count of 37, is far from accurate.

AMY GOODMAN: Hannibal Johnson, we want to thank you for being with us, author and attorney, author of Black Wall Street. And Marq Lewis, We the People Oklahoma, thanks so much for being there.

AMY GOODMAN: This is Democracy Now! When we come back, an astounding story in Connecticut. Police take a man’s video camera and don’t realize it’s still on. It records them plotting how to frame him. Stay with us. 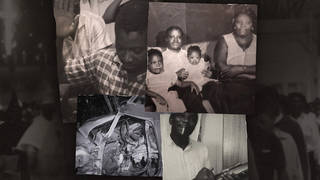