In Austria, conservative leader Sebastian Kurz has been tasked with forming a government after he won a slim majority in the snap elections earlier this month. His conservative party, which campaigned on an anti-immigration platform, is now weighing whether to form a coalition with Austria’s far-right populist Freedom Party, which won 26 percent of the vote in the Austrian elections. The Freedom Party was founded by former Nazis six decades ago. This comes as hate crimes in Britain hit a record high and anti-immigrant nationalist movements are surging across Europe. For more, we speak with Dominic Thomas, professor at UCLA who specializes in European politics. Thomas is chair of the Department of French and Francophone Studies.

AMY GOODMAN: Professor Dominic Thomas, you specialize in European affairs, and I wanted to shift gears a bit and ask you about Austria, where conservative leader Sebastian Kurz has been tasked with forming a government after he won a slim majority in the snap elections earlier this month. Kurz campaigned on an anti-immigration platform, his conservative party now weighing whether to form a coalition with Austria’s far-right populist Freedom Party, which won 26 percent of the vote in the Austrian elections, the Freedom Party founded by the former—by former Nazis six decades ago. Speaking last week, Sebastian Kurz reassured European leaders he would support the European Union.

SEBASTIAN KURZ: [translated] I’m not just glad we have this European Union, but I also see it as the responsibility of my younger generation to actively engage and shape the EU in a positive way. Any government I form will be a pro-European one, a government that wants to actively shape Europe and change it for the better.

AMY GOODMAN: “Taking the Horizon” by Txarango, here on Democracy Now!, democracynow.org, The War and Peace Report. I’m Amy Goodman, as we continue with Professor Dominic Thomas, who heads up the—he chairs the Department of French and Francophone Studies at University of California, Los Angeles, at UCLA. Professor Thomas, I asked you about the rise of conservative and right-wing parties and politics in Europe, starting with Austria, where the conservative leader, Sebastian Kurz, has been tasked with forming a government after he won a slim majority in the snap elections earlier this month, and also wanted to ask how Trump’s presidency here is affecting European politics.

DOMINIC THOMAS: Right. So, as I was just saying, what was remarkable about the Austrian context is, whereas other European leaders had explicitly said during their campaigns that if the far right performed well, that they would not consider entering into coalitions with them, the sitting foreign minister, Sebastian Kurz, running for the ÖVP party, when he came out on top and throughout his election, said that he would absolutely consider working with this far-right party. And what was interesting in the development of that is that essentially it has allowed these far-right views to be mainstreamed and to accept it. And in the end, about 60 percent of Austrian society elected a chancellor and the far-right group, if he does indeed go into the coalition with them, on a platform that is, you know, anti-immigration and so on, too.

The Trump presidency has shaped European elections in different ways over the past six months. First of all, Trump’s position on the international stage has led to a widespread consensus that—essentially, that America has vacated the world of foreign policy leadership and ethics and are turning to new leaders. So, in the German election, this worked in Angela Merkel’s favor, because she offered stability and continuity in the face of this sort of dwindling American set of influence. But the other aspect with the Trump presidency that has given value and credence to so many of these groups in Europe has been around the question of nativism. And you’ve seen so many political candidates arguing sort of “Austria first,” “Germany first,” “France first,” “Let’s take place of our domestic concerns,” “Let’s reduce immigration,” “Let’s target Islam” and so on. And these are some of the ways in which Trump has given some kind of credence and value to these political parties, and it’s really quite disturbing.

AMY GOODMAN: Let’s go back to the major speech that President Trump made in Poland in July, when he said the future of Western civilization is at stake, as he warned against the threats of terrorism and extremism. Trump spoke in Krasinski Square near the site of the 1944 Warsaw uprising against the Nazis.

PRESIDENT DONALD TRUMP: This continent no longer confronts the specter of communism, but today we’re in the West, and we have to say there are dire threats to our security and to our way of life. You see what’s happening out there. They are threats. We will confront them. We will win. But they are threats. … We are confronted by another oppressive ideology, one that seeks to export terrorism and extremism all around the globe. America and Europe have suffered one terror attack after another. We’re going to get it to stop.

AMY GOODMAN: President Trump’s speech was often interrupted by applause. According to news reports, supporters of the right-wing Polish government were bused in to hear Trump’s speech. Professor Thomas?

DOMINIC THOMAS: Well, what was so disturbing, I think, about that speech is—and there were many aspects—is, first of all, this idea that there is such a thing as the West versus the rest, and so on, and that, in fact, these societies are not already incredibly diverse, mixed and globalized. The aspect of that speech, particularly in Poland, in some of these areas around there, in Poland and Hungary and so on, if the European Union is indeed founded on some important questions of liberal democratic values and principles, what we find in Poland, what we find in some of the actions of President Trump, that interfering with the legal process, putting into question the validity of the local courts, challenging journalists and so on, are profoundly describing developments that have nothing to do with fundamental liberal democratic principles. And it was not surprising that he targeted that particular region of Europe to go and deliver this particular speech. We are increasingly seeing the rise of micro-nationalist positions that go along with these nativist, protectionist modes around Europe, and it’s a great source of concern to the European Union today.

AMY GOODMAN: In Britain, government figures show hate crimes have surged to record-high levels over the last year, with more than 80,000 hate crimes reported in one year, between March 2016 and March 2017. The researchers said the increase in hate crimes was fueled by the Brexit vote to leave the European Union, as well as the terrorist attacks in London and Manchester. About 80 percent were racially motivated.

DOMINIC THOMAS: Right. Then the question of immigration has been used by various government leaders and political figures to designate both aspects of it: on the one hand, the migratory flows into the European Union and, on the other hand, the question of immigration—in other words, the question of ethnic relations, of multiculturalism and diversity. And we saw this exploited by the Brexitiers during that political campaign. And their message echoed and has echoed that that we’ve seen in other elections throughout Europe—in the French elections with Marine Le Pen, in the Dutch elections with Wilders and so on. So, of course, into that, the question of terrorism has fueled those kinds of questions, and increasingly putting limits on migration and increased border control—the very kinds of debates that we see in the United States today.

AMY GOODMAN: Finally, Professor Thomas, this whole issue of the use of nuclear weapons, the reports that—President Trump asking his generals, “If we have nuclear weapons, why don’t we use them?” and the reports that the Secretary of State, Rex Tillerson, after that meeting, called him an “effing moron”—something he has not denied to this point, though asked repeatedly about it—the whole ramping up of attacks against North Korea, and, finally, this latest news that the Air Force says it will place nuclear-armed B-52 bombers on 24-hour ready alert for the first time since the Cold War ended in 1991—how is this affecting Europe right now?

DOMINIC THOMAS: Well Europe—the European Union heads of state, leaders, in one of their sections that they delivered at the end of the meeting, the section called external relations, made specific points about their ongoing support for the Iran nuclear deal; secondly, expressed tremendous concerns over not only the actions in North Korea, but also talked about the ways in which President Trump has escalated tensions in that particular area of the world.

European leaders and people living in Europe are concerned about the kind of dynamics that are being set in place, particularly with the long history of Cold War conflict, that was very real for people living in many parts of Europe. And there is just tremendous concern here that the United States has shifted so rapidly towards this kind of discussion, this bellicose discussion of conflict, of war, without sufficiently exploring diplomatic solutions or the destabilizing impact that this is having on global politics and relations.

AMY GOODMAN: We want to thank you so much for being with us, Dominic Thomas, professor at UCLA specializing in European politics, chair of the Department of French and Francophone Studies.

This is Democracy Now! When we come back from break, we’ll be speaking with the Pulitzer Prize-winning journalist David Cay Johnston, who wrote about biography of President Trump, has covered him for well over three decades. We’re particularly going to be looking at the tax plans that President Trump has put forward. Who will they help? Who will they hurt? Stay with us. 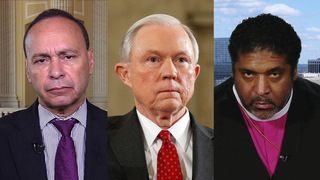