From Roy Moore to Trump: Sen. Markey Lauds Women Who Speak Out, Calls for Moore to Pull Out of Race

We speak with Senator Ed Markey of Massachusetts about Alabama’s Republican Senate candidate Roy Moore, who has been accused by at least four women of making sexual advances on them while they were teenagers. “He should pull out of the race to become the new senator from the state of Alabama,” Markey says.

AMY GOODMAN: And let me ask you a quick question about Roy Moore. Your thoughts on the Alabama Republican candidate for the Senate seat? Three women at this point have accused him of sexual—sexually abusing them, one when she was 14 years old.

SEN. ED MARKEY: It’s obvious that he should pull out of the race to become the new senator from the state of Alabama. But it’s clear that the old saying, “Hypocrisy is the tribute that vice pays to virtue,” applies Roy Moore. He’s always said the right thing, but now he has a chance to do the right thing. But it’s not clear that he’s going to.

AMY GOODMAN: And lastly, this all happens in an era of Trump, when already more than a dozen women have accused him of sexual abuse. He said he would sue them after the election. The election came and went. He has not sued any of them. Already, one has sued him for libel for calling her a liar.

SEN. ED MARKEY: I think that from Harvey Weinstein to Roy Moore to all the other revelations, it’s pretty clear that we have kind of crossed over into a new era, which is a great new era, which is that women are speaking up. They’re trying to make our country become more accountable for what has been a culture which has existed for far too long.

AMY GOODMAN: That was Democratic Senator Ed Markey of Massachusetts. 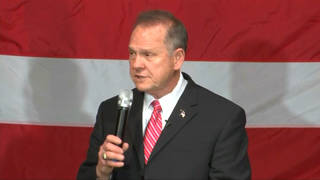