“Keep It in the Ground”: As COP23 Ends, Activists Protest at Europe’s Largest Open-Pit Coal Mine

Throughout the United Nations climate summit in Bonn, Germany, activists have been protesting against fossil fuels. Early this morning, Democracy Now! drove about 45 minutes west of Bonn to the forests of western Germany, where activists unfurled a banner at the largest open-pit coal mine in Europe that read, “It’s Up to Us to Keep It in the Ground.” “You can’t separate the peace movement from the climate movement,” says Lea Heuser, winner of Germany’s Aachen Peace Prize.

AMY GOODMAN: Yes, this is Democracy Now! We’re broadcasting live from the final day of the U.N. climate summit here in Bonn, Germany, where, all this week, activists have been protesting against fossil fuels, especially coal. Well, early this morning, we drove about 45 minutes west of Bonn to the forests of western Germany. For years, activists there have been fighting to shut down the largest open-pit coal mine in Europe. The massive Hambach mine extracts an extremely dirty form of coal called lignite, also known as brown coal, which causes the highest carbon dioxide emissions of any type of coal when burned. This morning, we met a group of activists at the Sindorf train station, then followed them to their meeting place.

AMY GOODMAN: I’m Amy Goodman from Democracy Now! Why are you doing this?

PROTESTER 1: To stop RWE and such companies to destroy all our future.

AMY GOODMAN: Why are you doing this?

PROTESTER 2: It’s up to us to keep it in the ground. And we are the youth, and we are responsible for this. It’s our future.

AMY GOODMAN: We’re in Rhineland, Germany, just about 45 minutes from the U.N. climate summit in Bonn. We’re standing in front of the largest open-pit coal mine in Europe, the largest open-pit mine of any kind in Europe. A banner is being unfurled that. It says, “It’s Up to Us to Keep It in the Ground.” It’s a red banner. People kneeled around it as they unfurled it. And we’re in front of the Hambach mine. This mine has already destroyed 90 percent of the ancient forest in the area. Their point is not to get arrested, but to arrest, to stop, this coal mine from operating.

Tell me your name, the group you’re with and what just happened.

MIRA JÄGER: I’m Mira Jäger. I’m here with JunepA. It’s the youth network for political actions. And we are just here to, yeah, demand the consequent phaseout of coal, especially in Germany, but all over the world, and the phaseout of all fossil fuel.

AMY GOODMAN: And can you describe what just took place?

MIRA JÄGER: Yeah. There were a few guys who went into the lignite coal mine pit. And yeah, they unfolded a really long banner, really mirrored to all the delegates who debate over the climate change. And a few kilometers, they are destroying the climate.

AMY GOODMAN: Where was the banner made?

MIRA JÄGER: The banner was made in Paris. And it was indigenous people banner there. And now it’s, yeah, today, the banner for the youth.

AMY GOODMAN:And, Lea, can you talk about why you, yourself, are involved? You’re from this area.

LEA HEUSER: I’m from this area, yes. And I know what’s happening. And I woke up very late in the matter of climate issues. I come from the peace movement. And by now, I see you can’t separate the peace movement from the climate movement. It’s the same, because the climate chaos that’s already arrived is causing so much damage and leading to so much people having to leave their countries, having to leave their regions, having to find other places to stay. It’s—yeah, it’s the same like war, like everything that makes people leave their homes.

AMY GOODMAN: Lea Heuser and her seeing eye dog were our guides this morning. Lea Heuser is with the Aachen Peace Prize, which was awarded this year to the German group, JunepA, which carried out this morning’s action. To see our full report from the occupied forest on the resistance to the massive Hambach mine, you can go to democracynow.org. 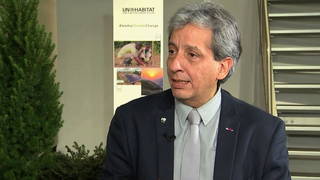