After Sayfullo Saipov reportedly drove a rented Home Depot truck down a bike path along Manhattan’s Hudson River, killing multiple people before crashing into a school bus, President Trump called for his execution and said he would consider sending him to Guantánamo Bay. We get response from Shayana Kadidal, senior managing attorney at the Center for Constitutional Rights, who says Trump wouldn’t be talking about sending the alleged attacker to Guantánamo Bay “if [Saipov] weren’t a Muslim guy with a beard.”

AMY GOODMAN: President Trump has called for a crackdown on immigration, telling Congress to cancel the so-called diversity visa program, in the wake of the attack in New York City that left eight people dead and at least 11 more injured.

AMY GOODMAN: President Trump’s demand came after the suspect, Sayfullo Saipov, reportedly drove a rented Home Depot truck down a bike path along Manhattan’s Hudson River, killing eight people before crashing into a school bus. He then reportedly jumped out of the car waving a pellet gun and a paintball gun, before being shot by police in the stomach. Authorities say Saipov has been planning the attack for more than a year and chose Halloween. They’ve gotten this information from his bedside in the hospital. Saipov, an Uzbek native who has lived in Florida, Ohio and Paterson, New Jersey, has now been charged with providing material support to a terrorist organization, as well as violence and destruction of a motor vehicle.

On Wednesday, President Trump called for his execution and called him an animal. Many have noted President Trump did not use words like “animal” to describe the 64-year-old white man Stephen Paddock, who killed 59 people, including himself, in Las Vegas. After that massacre, Trump said it was not time to talk about policy changes on gun control, although he’s now calling for immigration policy changes. Trump also did not call for the death penalty after white supremacist James Alex Fields killed one woman, Heather Heyer, by also driving his car into a crowd of people protesting a white supremacist rally in Charlottesville, Virginia, in August. Trump did not call James Alex Fields an animal, instead saying there was violence on both sides. President Trump suggested Wednesday he would consider sending Saipov to Guantánamo Bay.

REPORTER: Mr. President, do you want the assailant from New York sent to Gitmo?

AMY GOODMAN: This would mean sending Saipov to a military prison even though he’s already been charged with crimes in a U.S. federal court. Saipov has a green card, which means he’s a permanent U.S. resident. On Wednesday, Republican Senators John McCain and Lindsey Graham also called for Saipov to be held as an enemy combatant under the laws of war, denied his Miranda rights and taken to Guantánamo Bay. Meanwhile, Wednesday night, New Yorkers held an interfaith vigil for the victims of Tuesday’s attack and left flowers at memorials along the bike path where the rampage occurred.

Well, today, we spend the hour looking at the attack and the unfolding response to it. We begin here in New York with Shayana Kadidal. He’s senior managing attorney at the Center for Constitutional Rights.

Shayana, I want to start off by asking you about Guantánamo, about President Trump’s comment that this man, Saipov, should be sent to Guantánamo. Well, he called him an animal.

SHAYANA KADIDAL: Right. I mean, we wouldn’t be talking about this at all, and the president wouldn’t be talking about it, if he weren’t a Muslim guy with a beard, right? You know, I mean, the premise of this is that somehow it’s better to try somebody like this at Guantánamo in a military commission than it would be to try them here at home in our ordinary criminal justice system, in our regular federal courts. And that’s just absurd on its face. I mean, we know that, really, we have one of the most draconian criminal justice systems around in this country. It pulverizes defendants in terrorism cases. It’s not fairer procedurally really significantly than the commissions. It doesn’t result in shorter sentences. And the conditions of confinement after you’re convicted are typically worse.

So, you know, there’s no rational reason to try somebody down there rather than up here. And it’s just more theatrics from the president. I suppose we’ve come to expect that. The really maybe troubling thing is that the senior leadership in his own political party, the people we expect better of—McCain and Graham—are saying the same thing. And, you know, the reason they’re saying it is that under Obama, for eight years, they were saying this as kind of the pretense for why we needed to keep Guantánamo open at all, that somehow it’s a means of making people triable who we can try here at home.

AMY GOODMAN: Well, let’s just talk about the significance of Guantánamo. It’s dropped out of the news. People may not realize even how many men are there. But what happens to people who are tried in U.S. courts? I mean, already charges have been filed against Saipov. People like Tsarnaev, didn’t he, in this court, in a U.S. court, get the death penalty, whether people support that or not?

SHAYANA KADIDAL: Mm-hmm, right. You know, where you’ve got a video of somebody actually carrying out the attack, you know, the conviction rate is going to be higher even than the 99.2 percent rate that we’ve got for people who go to trial in the federal system, right? So they get convicted.

The sentencing is extremely harsh, because we have sentencing guidelines that add a massive enhancement for terrorism crimes. And we have mandatory minimums in a lot of different cases in the federal system, not necessarily here, but the sentences that are available are very long, whereas in the military commissions a lot of people have gotten off basically with time served, after convictions.

And then the conditions of confinement are horrible for terrorism cases. Most people are sent to a place called ADX Florence, where they’re kept in some of the most harsh solitary confinement that’s known to man.

So, you know, again, it’s basically putting people through a meat grinder to try them here at home. And, you know, surely, the president, his advisers, McCain and Graham, all know this.

AMY GOODMAN: So, talk about the number of people who are now at Guantánamo. And, in fact, if they’re at Guantánamo and they go through a military trial, can they get the death penalty?

SHAYANA KADIDAL: They can, in theory, right? The seven people who are on trial, I believe at least six of them are on trial for their lives, including Abd al-Rahim al-Nashiri, who is on trial for the Cole bombing, where his entire defense team was just discharged by the chief defense counsel because of really horrendous violations by the government, surveillance of his defense team, of—potentially of his meetings with his own lawyers.

AMY GOODMAN: Haven’t already something like three cases at Guantánamo been overturned? These men have been held for almost 20 years now, a number of them without charge.

SHAYANA KADIDAL: Right. I mean, the vast majority of people there haven’t been charged, will never be charged. So there are 10 people who have even been—either been convicted or are on trial right now, out of the 41. The rest, there are no plans to charge or try. And five of them are cleared for release.

AMY GOODMAN: And the cost?

SHAYANA KADIDAL: Half a billion dollars a year, some $10 million per individual, compared to, you know, maybe a couple thousands, dozens of thousands, for holding someone domestically.

AMY GOODMAN: And the fact that Saipov has a green card?

SHAYANA KADIDAL: Right, you know, presents all sorts of other legal hurdles. Noncitizens can, theoretically, be tried, if they fit the alien enemy combatant kind of standard in military commissions. But presumably, he would have a whole host of constitutional rights unambiguously in those trials, whereas right now they’re fighting over whether the noncitizens on trial actually have the full panoply of constitutional rights.

AMY GOODMAN: I want to go from Trump really casting question about the U.S. criminal justice system, so saying that he must be sent to Guantánamo, to what he said about the U.S. not prosecuting terror suspects quickly enough, calling the U.S. justice system a laughingstock. This was during a televised White House Cabinet meeting on Wednesday.

AMY GOODMAN: What we have now is a joke and a laughingstock. Shayana Kadidal?

SHAYANA KADIDAL: Yeah. You know, again, I think a whole host of federal prosecutors would disagree with that. You know, again, it’s theatrics. You know, it plays into the idea that after the Warren Court’s, you know, kind of reforms to make the criminal justice system at home even minimally sort of fair, to get police coercion and coerced confessions out of the system, that somehow the system has become completely tilted in favor of defendants. And, you know, he’s playing on a whole host of ideas that circulate in the culture because of cheesy 1970s police dramas and the O.J. Simpson trial. But the actual reality, especially in terrorism cases, is far from that.

AMY GOODMAN: I’ll ask you to stay with us. We’re going to break and then come back to look at the diversity lottery program and then the way the media covers this attack versus, oh, say, Las Vegas, versus the killing in Charlottesville. Shayana Kadidal is senior managing attorney at the Center for Constitutional Rights. We’ll be back in a minute.

AMY GOODMAN: “One for the Whistler” by the late Muhal Richard Abrams, jazz legend and one of the founders of the Association for the Advancement of Creative Musicians. Abrams died Sunday at his home here in New York City. 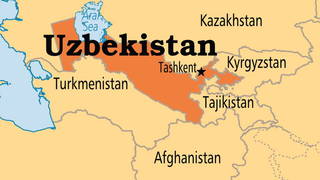