Sayfullo Saipov, the alleged assailant in the Tuesday attack that killed at least eight people in New York City, is an immigrant from Uzbekistan, a country that is now the focus of much attention, with some in the media calling it a hotbed of Islamist terror. We go to Tashkent, Uzbekistan, to speak with Steve Swerdlow, Central Asia researcher for Human Rights Watch. We’re also joined by Edward Lemon, postdoctoral fellow at the Harriman Institute at Columbia University.

StoryNov 02, 2017“Send Him to Gitmo”: Trump Urges Execution of Saipov After Defending “Both Sides” in Charlottesville

AMY GOODMAN: This is Democracy Now!, democracynow.org, The War and Peace Report. I’m Amy Goodman. Federal prosecutors have filed criminal charges in the deadliest terror attack in New York City since September 11th. They accused Sayfullo Saipov of carrying out the attack in Lower Manhattan Tuesday that killed at least eight people, injured about a dozen more, when he drove a rented Home Depot truck down a bicycle path, striking pedestrians and cyclists, then crashed into a school bus. Eight people died. Sayfullo Saipov is an immigrant from Uzbekistan, a country that’s now the focus of much attention, with some in the media calling it a hotbed of Islamist terror.

For more, we’re joined by two scholars who study the country. By phone from Tashkent is Steve Swerdlow, Central Asia researcher for human rights. And here in New York, Edward Lemon, postdoctoral fellow at the Harriman Institute at Columbia University.

We welcome you both to Democracy Now! Steve Swerdlow, let’s begin with you. Describe where you are, and then talk about Uzbekistan and, you know, how Uzbekistan has been described since the attack here in New York.

STEVE SWERDLOW: Well, good morning, Amy, and good evening from Tashkent. I also want to express my sympathy and condolences to the victims and their families, and my thoughts are also right now with tens of thousands of Uzbek Americans, who I think are experiencing a great level of fear and apprehension about statements from the president and policies that could affect them.

I’m here in Tashkent, and Uzbekistan is a complicated picture, in the sense that it is a country with an atrocious human rights record, and there are thousands of political prisoners. There’s widespread torture and almost no freedom of speech. But the reason I’m even here is because there have been some changes going on in this country over the past few months. There’s a president that came into power about a year ago and is starting to make some modest, small positive improvements in the human rights situation. But overall, Uzbekistan, for about 27 years, was ruled by a dictator named Islam Karimov, whose policies on religion and suppressing religion and suppressing freedom of speech, in large measure, caused an outmigration of millions of Uzbeks to other countries. And I think that fact of migration is relevant to this case and to the other cases.

You asked about how the media is describing Uzbekistan. And I think it’s been somewhat irresponsible in the past 24 hours. There have been wild generalizations about this country as a hotbed of extremism, of Islamism. And really, in fact, it’s the opposite. The government has for years suppressed religion. And in many ways, that authoritarianism is what’s more relevant to this discussion.

AMY GOODMAN: Talk about what we know about Sayfullo Saipov’s background. I mean, he is now a green card holder in the United States, originally born in Uzbekistan. You’re in the capital, Tashkent, Uzbekistan.

STEVE SWERDLOW: That’s right. Tashkent is the capital, the largest metropolis in Central Asia. This is a country of 32 million people. And what we know about Saipov is very, very sketchy at the moment, but we know that he lived in Tashkent. He left this country in 2010. And, you know, this is—again, at that time that he left this country, it was a dark period of time. And in many ways, it is still a very difficult human rights situation, but at that time especially. I was actually kicked out. Human Rights Watch was closed down in 2010 from Uzbekistan because of a repressive security apparatus, led by the government, which really caused a lot of despair, terrible socioeconomic conditions, rife corruption, which caused this outflow of migrants to other countries, and most prominently to Russia.

AMY GOODMAN: So, Steve Swerdlow, can you talk about the role Uzbekistan played after 9/11, facilitating what are known as renditions to CIA black sites, this relationship between U.S. and Uzbekistan, and what happened in these black sites?

STEVE SWERDLOW: Amy, that’s a really important part of the story and the larger context of Washington’s relationship with Uzbekistan. This is a country that President Bush really cozied up to in the aftermath of 9/11. And pretty quickly, they started rendering or renditioning suspects to Tashkent, where they were interrogated, and torture was used—if many will remember the revelations made by the former British ambassador here in Tashkent, Craig Murray, who revealed that torture was a widespread practice in the rendition program here. That led to a lot of controversy and a lot of research that Human Rights Watch was able to do about torture, including, in some notorious cases, some prisoners that were actually immersed in boiling water and killed.

AMY GOODMAN: Explain that further. You’re saying that they—that prisoners were boiled by the Uzbek government.

STEVE SWERDLOW: That’s correct. That’s probably the most—one of the most egregious cases that we were able to document, and this is back in 2002. But I should say that torture is a continuing practice. In fact, even now, it’s still widespread in Uzbekistan’s prisons. At that time, that was 2002, and the U.S. relationship with Uzbekistan was to close its eyes to the terrible human rights record and cooperate in the war on terrorism.

AMY GOODMAN: We’re also joined by Edward Lemon. As we learn more about Saipov, the alleged assailant here—you know, he was shot by police. He was holding a pellet gun and a paintball gun. He had just come out of this vehicle, where he had killed eight people. They shot him in the stomach. How do you feel the conversation should be reframed in the media when it comes to where he comes from, Uzbekistan?

EDWARD LEMON: Well, I think, as Steve said, Uzbekistan is a bastion of torture, more so than it is a hotbed of extremism. I think looking at the cases of Uzbeks who have led attacks abroad and who have been radicalized and have joined groups like Islamic State, most of these processes are happening outside of Uzbekistan. And Saipov, as we’ve already mentioned, was a case of this. I mean, he grew up in what was described as a secular family, what was described as a relatively prosperous family in Tashkent, and his parents were traders in the local bazaar. He graduated from financial college in 2009, started a job in a hotel and then won the green card lottery and came to America. And I think we need to look at what happened to him after coming to America, seemingly came for positive reasons, seemingly came to pursue the American dream. And I think it’s important that we look at what happened to him after he migrated here.

AMY GOODMAN: Well, what about this radicalization that occurred here?

EDWARD LEMON: I think, from the emerging picture that we’re getting from speaking to his friends and from some of the things that have been said by the FBI, I think, you know, he obviously lived a very transitory existence, first moving to Ohio, but then very swiftly to Tampa and then to Fort Myers. And he was a trucker, and he didn’t really find any root in any community here, from speaking to his friends. He struggled to find a job. And I think this is an important factor for many of—

EDWARD LEMON: Exactly, he became an Uber driver in Paterson, New Jersey, in the end. And so, I think this is—when he first came here, I think he wanted to work in a hotel. He had aspirations to climb up and live the American dream. And seemingly, perhaps due to his lack of English skills, he went from a position of relative prominence in a relatively prosperous family in Uzbekistan to coming to America and obviously living on the margins. And I think we need to look at sort of how those factors maybe led him to take such an extreme—

AMY GOODMAN: The latest news out of the investigators—and it’s interesting he wasn’t killed, and they’re learning a lot about him, just talking to him in the hospital. Steve Swerdlow, in this last minute that we have, you are in Uzbekistan. You’re in Tashkent. What is the response of people there?

STEVE SWERDLOW: I think people are shocked. And, you know, there’s a certain amount of apprehension that the image of Uzbeks across the entire world could be sullied by this. I think what’s interesting is that the president, President Mirziyoyev, quickly sent condolences, though, to President Trump, which was a sort of departure from earlier practices, where problems were ignored. I think the fact that it was acknowledged, and acknowledged quickly, by the government is a good sign. But I think, in general, of course, Uzbeks here and Uzbeks in the United States are feeling a lot of fear, a lot of apprehension. And it’s really important that they hear the right message coming from the president, President Trump.

AMY GOODMAN: And to be specific, 10 seconds, that message is?

EDWARD LEMON: Well, certainly, the green lottery, the diversity program, I think, offers a lot of hope to people. I know people who are getting ready to participate in that program from this country, and I think that should not be discontinued. That would be a huge mistake.

AMY GOODMAN: Steve Swerdlow, I want to thank you for calling in from Tashkent, Uzbekistan, Human Rights Watch Central Asia researcher for human rights, and Edward Lemon, postdoctoral fellow at the Harriman Institute at Columbia University.

That does it for our broadcast. Democracy Now! is accepting applications for our paid six-month internships, application date November 15th. For more, go to democracynow.org.

I’ll be speaking at the Buffalo Convention Center in New York on Friday. You can check our website at democracynow.org. 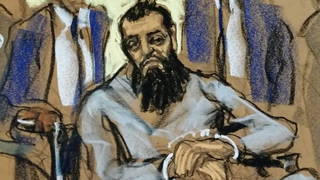