Thousands of people recently rallied on the National Mall in Washington, D.C., calling for justice for Puerto Rico, two months after Hurricane Maria made landfall. The protesters called on FEMA to act quickly to restore services and for the cancellation of Puerto Rico’s debt. Half of the island remains without power, and hundreds of thousands of residents still have no access to clean drinking water. This comes as the head of the Puerto Rico public power company, PREPA, resigned, after facing widespread outrage and controversy for signing a $300 million contract with the tiny Montana-based company Whitefish, named after the hometown of Interior Secretary Ryan Zinke. Democracy Now! was in Puerto Rico a month ago, and just a few days before the cancellation of the contract was announced, we went to the Roberto Clemente Coliseum, where the San Juan mayor, Carmen Yulín Cruz, and her vice mayor, Rafael Jaume, had just gotten their hands on the contracts and were analyzing the details of the $300 million deal with Whitefish and another $200 million contract between the power company and Cobra, which is an Oklahoma-based company.

AMY GOODMAN: This is Democracy Now!, The War and Peace Report. I’m Amy Goodman, with this Democracy Now! special. Last Sunday, thousands of people rallied on the National Mall in Washington, D.C., calling for justice for Puerto Rico, two months after Hurricane Maria made landfall. The protesters called on FEMA to act quickly to restore services and for the cancellation of Puerto Rico’s debt. They also demanded Congress permanently waive shipping restrictions under the Jones Act. Half of Puerto Rico remains without power. Hundreds of thousands of residents still have no access to clean drinking water. This comes as the head of the Puerto Rico public power company, known as PREPA, resigned, after facing widespread outrage and controversy for signing a $300 million contract with the tiny Montana-based company Whitefish, named after the hometown of Interior Secretary Ryan Zinke. Last month, under enormous pressure, Puerto Rico’s governor, Ricardo Roselló, instructed Puerto Rico’s power company to cancel the controversial contract with Whitefish Energy.

Well, we were in Puerto Rico a month ago just as the cancellation of the contract was being announced. But a few days before, we went to the Roberto Clemente Coliseum, where the San Juan mayor, Carmen Yulín Cruz, and her vice mayor, Rafael Jaume, had just gotten their hands on the contracts and were analyzing the details—yes, of the $300 million deal with Whitefish and another $200 million contract between the power company and Cobra, which is an Oklahoma-based company.

AMY GOODMAN: So you just got a hold of the—both the Whitefish contract—

VICE MAYOR RAFAEL JAUME: And the Cobra contract. Both of them this morning, we got, opened them.

AMY GOODMAN: And this is the FEMA’s statement from this morning?

VICE MAYOR RAFAEL JAUME: Well, FEMA’s statement of this morning says clearly, “The decision to award a contract to Whitefish Energy was made exclusively by Puerto Rico Electric Power Authority, PREPA. FEMA was not involved in the selection. Questions regarding the awarding of this contract should be directed to PREPA.” Following says, “Any language in any contract between PREPA and Whitefish that states FEMA approved that contract is inaccurate.” Strong words. What I’m—I’ll tell you this one.

AMY GOODMAN: And this is a part of the contract.

VICE MAYOR RAFAEL JAUME: This is Article 59 in Whitefish contract. It says, “In the event shall PREPA“—

AMY GOODMAN: “In no event.”

VICE MAYOR RAFAEL JAUME: “In no event shall PREPA, the Commonwealth of Puerto Rico, the FEMA administrator, the Comptroller General of the United States or any other authorized representatives have the right to audit or review the cost and profit elements of the labor rates specified herein.” That is—you can read about it yourself. That’s it. There’s no other thing that—that’s black and white.

AMY GOODMAN: And this?

VICE MAYOR RAFAEL JAUME: And this one says—this is Article 68, penalties, fines and disallowed costs.

VICE MAYOR RAFAEL JAUME: Disallowed costs. “By executing this contract, PREPA hereby represents and warrants that FEMA has reviewed and approved of this contract and confirmed that the contract is an acceptable form to qualify for funding from FEMA and other U.S. government agencies.” Totally the opposite in contrast to what FEMA is saying.

AMY GOODMAN: Of what FEMA is saying.

MAYOR CARMEN YULÍN CRUZ: You know what that means? That means that, right there, that contract is null and void.

MAYOR CARMEN YULÍN CRUZ: It contradicts the laws of the United States of America, and it should be voided right now by the Puerto Rican government. And if the Puerto Rican government does not have the nerve to do what they have to do in order to do things right, then the U.S. government should do it, because what this means is that we will not get reimbursed for a $300 million contract awarded to a two-employee company that did not have the expertise nor business getting into this business.

AMY GOODMAN: PREPA, of course, is the Puerto Rico Electric Power Authority. Did PREPA approve this?

MAYOR CARMEN YULÍN CRUZ: PREPA approved it. I have asked for—actually, the director of PREPA signed it. I have asked for PREPA to release the minutes of the meeting where this was discussed. But certainly, FEMA did not approve this. That means we are not going to get reimbursed by this. And by declaring that in fact FEMA approved it, they were lying when they signed the contract.

AMY GOODMAN: The head of PREPA was lying.

MAYOR CARMEN YULÍN CRUZ: Both parties, because if I was getting a $300 million contract based on the fact that I would get reimbursed by FEMA, I would have liked that in writing. Amounts much less than that and decisions much less than that, I’ve said, “No, until I have it in writing.” So that is null and void right there. Right there. There is nothing. You cannot tell a governmental entity that you cannot audit a contract, that you have no right to request a time frame, and you cannot represent things that are not true in contracts. That is just basics of contract law. So this right here, it’s null and void.

AMY GOODMAN: So, you want this—do you want the Whitefish contract nullified?

MAYOR CARMEN YULÍN CRUZ: It should be nullified. It is scandalous. It is an affront on our people. And frankly, again, when I called for this two days ago, their response, from the Whitefish Twitter, was threatening to take away the 44 men and women—I don’t know if they have women working, they said men—and 40 more that were coming that day. So they have 84 people working in San Juan, which is the largest city in Puerto Rico. Not only that, now I want—I would want to know: What is the work plan? Well, they don’t have to have a work plan. You know why? Because in the contract it states that they don’t have to finish anytime soon. So this is a gift of $300 million to two people. That’s what this amounts to.

AMY GOODMAN: Do think the head of PREPA should be fired?

MAYOR CARMEN YULÍN CRUZ:Yes. He should have been fired a long time ago. A long time ago. What is beyond me is why the governor continues to say that this man has his support.

AMY GOODMAN: And the head of PREPA is?

AMY GOODMAN: And the other contract? This is a $300 million contract. Then there’s a $200 million—

MAYOR CARMEN YULÍN CRUZ: With Cobra. That one—

MAYOR CARMEN YULÍN CRUZ: That one, I haven’t had a chance to look at it. We got it this morning.

MAYOR CARMEN YULÍN CRUZ: We went to the controller’s office.

AMY GOODMAN: This also signed be the head of PREPA?

MAYOR CARMEN YULÍN CRUZ: Yes, also signed by the head of PREPA. So, it’s very interesting, because when you look at these contracts, they’re already, some of them—I don’t know if it’s—I think it’s this one, already has addendums to it. There have already been changes.

MAYOR CARMEN YULÍN CRUZ: There have already been changes. You haven’t even started.

AMY GOODMAN: I don’t know if there’s any relationship between Scott Pruitt, who’s the former Oklahoma attorney general and now the head of the Environmental Protection Agency.

MAYOR CARMEN YULÍN CRUZ: I don’t know, either. But what I do know is that two and three is five, and there’s $500 million in here, one of which is utterly null and void. And it’s, you know, very difficult to understand that in the United States contract law would allow one of the parties to be taken for a ride, because this is—this PREPA contract is so odious and so not good for the Puerto Rican people.

MAYOR CARMEN YULÍN CRUZ: Yes, yes. And not only that, look, it was signed October 17th. This, I had the page this morning. October 17th. This is a $300 million contract. I hope to God that it has a lot more than these little tiny pages that we have here, because it’s—it’s unnerving. It truly is unnerving, you know, that people can just swindle, swindle an entire population when they are at its most vulnerable. 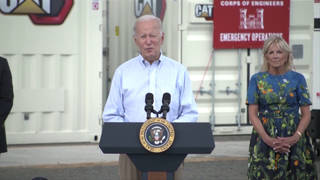