As Native American Heritage Month winds down, President Donald Trump is opening the door to new drilling and mining on land considered sacred by tribal nations. On Monday, Trump plans to travel to Utah to announce plans to shrink the Bears Ears and Grand Staircase-Escalante national monuments to make way for more industrial activity on the land. The Hopi, Navajo Nation, Ute Mountain Ute Tribe, Pueblo of Zuni and the Ute Indian Tribe all say they will sue to stop the plan. This comes after Trump attempted to insult Massachusetts Sen. Elizabeth Warren by referring to her as “Pocahontas” during a White House ceremony honoring Navajo code talkers, Native Americans who served in the Marines during World War II and used the Navajo language in order to transmit encoded information. Warren says her family is part Cherokee. We speak with Mary Kathryn Nagle, a citizen of Cherokee Nation and a partner at Pipestem Law, P.C., a law firm dedicated to the restoration of tribal sovereignty and jurisdiction.

JUAN GONZÁLEZ: President Trump is winding down Native American Heritage Month by opening the door to new drilling and mining on land considered sacred by tribal nations. On Monday, Trump plans to travel to Utah to announce plans to shrink the Bears Ears and Grand Staircase-Escalante national monuments. U.S. Interior Secretary Ryan Zinke recommended both sites be reduced in order to make way for more industrial activity on the land. Five tribes—the Hopi, Navajo Nation, Ute Mountain Ute Tribe, Pueblo of Zuni and the Ute Indian Tribe—say they will sue to stop the change.

This comes after Trump attempted to insult Massachusetts Senator Elizabeth Warren by referring to Warren as “Pocahontas” during a White House ceremony honoring Navajo code talkers, Native Americans who served in the Marines during World War II and used the Navajo language in order to transmit encoded information.

AMY GOODMAN: President Trump has frequently attacked Senator Warren by calling her “Pocahontas.” Warren says her family is part Cherokee. Trump held the ceremony honoring the Navajo military veterans in front of a portrait of the former President Andrew Jackson, who was called “Indian Killer” by the Cherokees. Jackson signed the Indian Removal Act, leading to the forced displacement and death of tens of thousands of Native Americans, a march that became known as the Trail of Tears. This is Elizabeth Warren, speaking later on Monday.

SEN. ELIZABETH WARREN: Had to throw out a racial slur. You know, he seems to think that if he keeps doing that, somehow he’s going to shut me up. It hadn’t worked in the past. It’s not going to work in the future.

AMY GOODMAN: We’re going to go right now to Mary Kathryn Nagle, a citizen of Cherokee Nation, a partner at Pipestem Law, P.C., a law firm dedicated to the restoration of tribal sovereignty and jurisdiction.

We thank you so much for joining us, Mary Kathryn Nagle. Can you respond to what took place in this Navajo ceremony, the code talkers being honored, everything that happened there, from the portrait of Andrew Jackson to what President Trump said about Senator Warren?

MARY KATHRYN NAGLE: Thank you so much for having me.

First, I would just like to say that I read and respect the remarks made by the Navajo Nation president, as well as other elected leaders of Navajo Nation, criticizing the president for using an opportunity where he should have been commemorating and giving gratitude and thanks to the sacrifice of veterans, who risked their lives to save the United States. And using that ceremony as an opportunity to antagonize a political opponent is wholly inappropriate. And so I certainly stand with the folks from Navajo Nation who have expressed their dismay that the president would use such an opportunity to attack one of his political opponents.

I think it is not without irony that he made this attack in a moment when he should have been honoring the sacrifice of the Navajo code talkers, in front of a statue of—or, I’m sorry, a portrait of Andrew Jackson. You know, being a citizen of Cherokee Nation, I know very—I have a lot of experience with the legacy of Andrew Jackson and what he stood for. When he ran for president in 1828, his platform was the eradication of tribal nations. That is, the eradication of tribal jurisdiction, tribal sovereignty and our indigenous languages. So, ultimately, he failed. We’re still here today. Cherokee Nation is still here. Navajo Nation is still here. The languages are somewhat endangered, but we are still here, and many of our citizens are speaking them. If Andrew Jackson had been completely successful in his efforts, the Navajo code talkers, the Cherokee code talkers, the Choctaw code talkers, all of the code talkers who assisted the United States Army in World War I and II would not have been able to do that. And so I think it is ironic that he was standing in front of a portrait of a man who tried to wipe out tribal nations and tribal languages and failed.

JUAN GONZÁLEZ: And, Mary Kathryn Nagle, his introduction of Pocahontas into this ceremony and this continued, repeated attempt to, from his point of view, smear Senator Elizabeth Warren by calling her “Pocahontas”—who was Pocahontas, for those folks who only see her as a Disney character?

MARY KATHRYN NAGLE: Right. And I think most Americans at this point understand her as the Disney character. Her real true story has been commodified and retold in a false narrative that celebrates her union with her abuser. She was a survivor of a form of violence, of colonial violence, at a time when Native women were primary targets, because the colonial powers who came over here, from 1492 and even past 1776, knew that a primary way of destroying a tribal nation, an indigenous nation, is to attack the women.

As Native women, we give birth to the next generation of our tribal citizens. If you eradicate the women, you eradicate the nation, and then you’re able to colonize the area. So, in that way, Pocahontas was a prime target. She survived rape. She survived a kidnapping. And she ended up dying—some say maybe perhaps she was murdered—in 1621, about almost 400 years ago, in England, and is still buried there. She was never brought home to be repatriated and buried with her relatives here on this side of the ocean.

And so, I think, for many Native women, when they see someone in power, especially the president of the United States, or a cultural icon like Nicki Minaj, misuse and abuse Pocahontas’s name without sharing her story, it reminds Native women survivors that our stories are hardly ever shared. Most of the time, our stores are silenced.

And it’s not a coincidence that Pocahontas’ story, her real story, is not shared, and at the same time that violence that she experienced back in the 1600s continues today. And unfortunately, what began as a form of colonial conquest has now transformed into a contemporary cultural norm, where violence against Native women is practiced and accepted in the United States. And, in fact, our Native women suffer the highest rates of domestic violence, sexual assault and murder, higher than any other population in the United States today.

PRESS SECRETARY SARAH HUCKABEE SANDERS: I think what most people find offensive is Senator Warren lying about her heritage to advance her career.

AMY GOODMAN: That was Sarah Huckabee Sanders, responding to questions about using the term “Pocahontas.” I wanted to get your response to that, Mary Kathryn Nagle, very quickly.

MARY KATHRYN NAGLE: Sure. So, many people have said that to me, too: “Why are you so offended? If you are truly Cherokee, you should be thankful that the president is calling out a fake Indian.” But my response is: When did Pocahontas become synonymous with fake?

She was not fake. She was a real woman, a survivor of rape and colonial conquest. Well, actually, she wasn’t a survivor. She lost her life. And so long as we think that her name is synonymous or an adjective for fake, and should be used, and that her story should be erased to attack the president’s political opponents, we’re actually going to lose the real story and the real message that we so desperately need to hear in the United States today. And that’s just a reality of what Native women, back then and today, had to survive and endure just to continue to be here. 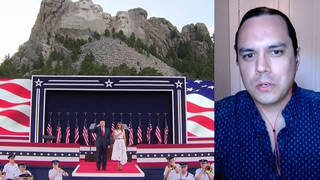