Examining the Paradise Papers, The Guardian reports seven Republican super-donors mentioned in the papers stored some of their fortunes offshore, beyond the reach of public scrutiny and tax authorities. Together, the billionaires pumped more than $350 million into the 2016 election. Some are well-known backers of conservative causes, like casino magnate Sheldon Adelson and Charles and David Koch. Another investigation focuses on Democratic donor James Simons, who spent $11 million to back Hillary Clinton’s 2016 presidential campaign. Simons is the founder of Renaissance Technologies, the world’s most profitable hedge fund. Leaked records show he kept much of his $8 billion fortune in an offshore private wealth fund in Bermuda in order to avoid “particularly severe” taxes that would be triggered if he tried to bring the funds onshore. We speak with Jon Swaine, senior reporter for The Guardian.

AMY GOODMAN: Our guest is Jon Swaine, senior reporter for The Guardian, where he’s part of the team that is publishing stories on the Paradise Papers. One of his new stories, “The seven Republican super-donors who keep money in tax havens.”

JUAN GONZÁLEZ: Could you talk about that, Jon?

JON SWAINE: Sure. I think one example from this story that is a particularly interesting case about money in politics today is this guy Warren Stephens. He’s not that well known. He’s not your Kochs, the Adelsons, who are household names perhaps. But he’s very important. He gives a lot of money to Republican candidates.

And what we found is he is the hidden co-owner of a payday lending company that is being sued by the federal government for allegedly exploiting customers, for overcharging them with loans, for deceiving them on how much their loans would cost. And unbeknownst to all of us, he’s been a co-owner of one of these companies while backing Republicans who are seeking to bring down the regulator, the Consumer Financial Protection Bureau, that is taking this company to court. You know, it’s a clear conflict. And before this leak arrived, we just didn’t know that he was involved in it.

JUAN GONZÁLEZ: And what about the major Democratic donor, as well, who’s Simons?

JON SWAINE: So, James Simons—we talked about Robert Mercer. James Simons took over, as you said, as head of Renaissance Technologies—Robert Mercer took over from James Simons at that hedge fund. James Simons founded it. And what we found in this leak is that since the '70s he's been building a trust fund, a private wealth fund, in Bermuda, which is this tax haven in the Atlantic Ocean. It’s worth at least $8 billion, probably quite a lot more. And it’s been accumulating wealth year after year without facing any U.S. taxes.

And, you know, he is now saying he’s going to use most of it to give to charity, which—fine, but most people, when they give money to charity, they’ve already paid their taxes, right? And so, I think people view this as proof that for the super-rich, for the ultra-wealthy, there’s a kind of completely different set of laws and of practices. that are out of reach for most people.

AMY GOODMAN: One of the filings leaked in the Paradise Papers shows how an attorney for Renaissance Technologies founder James Simons asked Bermuda’s Supreme Court to hold hearings on restructuring his trust in private, in order to prevent the Simons name from being listed in the public docket. The lawyer writes, quote, “There has always been very great sensitivity as regards even the remotest possibility of publicity of the wealth of Mr Simons and his family. Mr Simons himself is exceptionally private,” he wrote. The Guardian also reports Simons has publicly called for higher taxes on Americans he has termed “rich guys like me.”

So you have these two political guys, James Simons, founder of Renaissance Technologies in Stony Brook, Long Island, right near the university there, and Robert Mercer, who took over from him. Now, according to BuzzFeed, it’s Simons that has convinced Robert Mercer to step back because he’s demoralizing the entire company for supporting the white nationalists and Milo Yiannopoulos and Breitbart News. And so Mercer has stepped back. But you’ve got these guys covering the spectrum, supporting the various parties, and all—but what they have in common is their offshore tax havens.

JON SWAINE: I think that’s right. And I think it actually speaks to why a lot of people on the left are disenchanted with sort of mainstream Democratic politics. This is a guy who gave $11 million to Priorities USA, the sort of major super PAC that backed the Clinton campaign. He’s given millions more to other Democrats, to the Senate Democratic fund and to the House Democratic fund. And yet, as you say, he is storing billions of dollars offshore. And I think, as you said, it covers the spectrum to an extent, but it’s the sort of the mainstream spectrum of U.S. politics, and it’s why I think a lot of liberals are disenchanted with these mainstream Democrats.

JUAN GONZÁLEZ: Yeah, I wanted to ask you about the two Russian state institutions with close ties to Putin who were investing in Facebook and Twitter, but also through a business associate of Jared Kushner.

JON SWAINE: That’s right. So we knew the man you mentioned. His name’s Yuri Milner. He’s a Russian tech investor, and he also invests in a Jared Kushner company here in the U.S. What we didn’t know is that a couple of his investments, in Facebook and in Twitter, were funded by Russian state banks, essentially. One of them is a bank. One of them is a sort of investment vehicle for the Russian government. And this is more—this is more information that came out of the Paradise Papers leak. Twitter has a—had an investment of $191 million funded by VTB Bank in Moscow, which has close links to Russian intelligence. Facebook had a billion-dollar investment funded by Gazprom, which is an oil and gas company in Russia, but it has a sort of financial arm, as well. And we didn’t know any of this before these leaks sort of showed us the way to find these investments.

AMY GOODMAN: So talk more about Apple, Facebook, Twitter, and what you found in the Paradise Papers. And then lay out what these papers are and what this Appleby company is. The front page of the Times today is a picture of Madonna, Bono and the queen of England. And it’s the Paradise Papers that links them all.

JON SWAINE: Appleby is the company at the center of this whole thing. They’re a legal and accounting services firm. They have offices in Bermuda, in the Isle of Man, in tax havens all around the world. And what they do is basically they get paid by corporations and wealthy people to find the most tax-efficient, as they say, areas to put their money.

And the people who do this range from, as you say, the royal family in the U.K. to celebrities like Madonna to corporations like Apple, all of them paying very expensive lawyers and very expensive advisers to find the new tax loophole, essentially, around the world for them to park their funds. Apple, you know, one of the most popular, ubiquitous companies of our time, parking tens of billions of dollars offshore rather than just bringing it into the U.S. and paying taxes on it, you know, they’re a U.S. organization. They have employees using public services in California. They’re an American corporation, and yet they decide that they’re going to park all this money offshore.

JUAN GONZÁLEZ: Well, Appleby, the company from which many of these documents come, has insisted that it’s reviewed the allegations and is comfortable that there’s nothing illegal that has occurred here. What about this issue of whether there’s anything illegal happening in all of these exposés of the Paradise Papers?

JON SWAINE: You know what? They’re probably right, that probably the lion’s share—there may be a few cases around the edges—the lion’s share of this is going to be legal, because this is the system that is in place, where these loopholes, these offshore vehicles and all these sort of systems and schemes are within the law. But as I say, they are the most—the newest, sort of cleverest ways of exploiting the system. And these kinds of systems are just out of reach for normal people. Most people just get paid and pay their taxes. They can’t find expensive lawyers to find them kind of clever loopholes in Bermuda or the Cayman Islands to just save a bit more money here, a bit more money there. And so, yeah, they’re right. As far as they’re concerned, they’ve done nothing wrong. This is what they do, if you like.

AMY GOODMAN: We just have a minute to go, but your colleague, Ed Pilkington, at The Guardian has a new report out today, “From Harvey Weinstein to Shakira, the Celebrities with offshore interests: Martha Stewart, Madonna and Nicole Kidman are among those named in leaked Paradise Papers documents.” What about Harvey Weinstein?

JON SWAINE: So, Harvey Weinstein turns out to have been involved in a offshore scientific research company. It’s a strange company where several sort of well-known people seem to have put money in. I think it’s now ended, but, as you said, this just shows what a range of people involved in this whole thing, from political influence to royals to celebrities like Madonna and Harvey Weinstein, all involved in putting money offshore, away from the IRS.

AMY GOODMAN: And what that means is the lack of investment in infrastructure, in social services in the United States and other countries around the world.

JON SWAINE: I think that’s right. And I think that’s what really concerns people when they read these stories. You know, times are tough. Wages have been stagnating for decades for the average worker. There’s this sort of backlash against the system, which we see with Brexit and with Trump and all these movements. And actually, perhaps part of that is because the money that could be going into improving things for most people, improving public services, improving basic infrastructure in the country, is being moved offshore.

AMY GOODMAN: Well, Jon Swaine, we want to thank you for being with us. We will link to all your pieces. He is a reporter for The Guardian, part of the team publishing stories on the Paradise Papers. 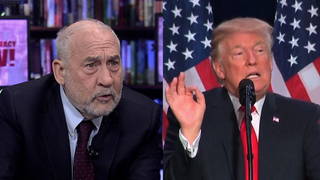