Immigrant communities across the country are on edge after federal immigration agents arrested over 600 people in the past week in the largest raids since Donald Trump became president. Raids were reported in at 11 states, including California, New York, Georgia, North Carolina, South Carolina, Illinois, Indiana, Kansas, Kentucky, Missouri and Wisconsin. On Sunday, Trump tweeted, “The crackdown on illegal criminals is merely the keeping of my campaign promise. Gang members, drug dealers & others are being removed!” Immigrant rights activists say the actions signal a clear shift by the Trump administration to deport people who were considered a “low priority” for removal under President Obama. We speak to California state Senate President Kevin de León and Steven Choi, executive director of the New York Immigration Coalition.

StoryJul 14, 2020“Release Is Only Way to Save Lives”: Migrant Families Face Separation as COVID Spreads in ICE Jails

JUAN GONZÁLEZ: Immigrant communities across the country are on edge after federal immigration agents arrested over 600 people in the past week in the largest raids since Donald Trump became president. Raids were reported in at least 11 states, including California, New York, Georgia, North Carolina, South Carolina, Illinois, Indiana, Kansas, Kentucky, Missouri and Wisconsin. It is not clear if ICE, or Immigration and Customs Enforcement, is continuing routine operations or stepping up its deportations in line with President Trump’s policies. On Sunday, Trump tweeted, quote, “The crackdown on illegal criminals is merely the keeping of my campaign promise. Gang members, drug dealers & others are being removed!” But the Department of Homeland Security has said the arrests were long planned and routine.

AMY GOODMAN: Immigrant rights activists say the actions signal a clear shift by the Trump administration to deport people who were considered a “low priority” for removal under President Obama. An executive order issued during the first week of Trump’s presidency expanded the group of immigrants considered priorities for deportation, including those without criminal records as well as those accused of crimes but not convicted. President of the California state Senate Kevin de León, who will be joining us in a minute, spoke out against the raids.

We welcome you both to Democracy Now! Senator de León, talk about what you were describing in this clip, so that when President Trump says, “We only arrest—we’re deporting criminals,” what it means to have a criminal record when you’re undocumented.

SEN. KEVIN DE LEÓN: Well, good morning, Amy. And that was a testimony during a Senate public safety hearing in Sacramento at the State Capitol, with regards to my measure, the California Values Act.

The reality is this, is that the vast majority of very hard-working, law-abiding, taxpayer residents of California and of the nation who currently are undocumented, many of them do possess, in some form—some form, identification that they probably secured to get access to employment. This is quite common. And you wouldn’t be able to do so, say, for example, work at Carl’s Jr., if you’re undocumented, without securing some type of identification.

The reality is this, is that there’s a lot of fear, there’s a lot of panic. The levels of anxiety are extremely high, especially among children, the American-born children of these law-abiding, tax-paying residents of California, because of the most recent raids that have taken place during the past week. When President Trump campaigned on deporting the most violent, those who are criminal felons, he made it very clear just recently, through his executive order, that he’s going to actually broaden the eligibility, the criteria for deportation. And the reality is this: We have innocent mothers, we have innocent fathers, hard-working individuals, who will be rounded up because of the broadening of the criteria. And they’re making—or, they will be making children fatherless, as well as motherless, separating children from their mothers, and mothers from their children.

So, what I’m trying to do with my colleagues in California is to make sure that the federal government does not commandeer our local police agencies, our state police agencies, and use our tax dollars to be an extension of the Trump deportation machine.

JUAN GONZÁLEZ: Well, you were mentioning families separated. We reported last week on the case of Guadalupe García de Rayos in Phoenix, Arizona. The felony conviction that they referred to in her case was the—the only crime was that she had been rounded up several years ago in a raid by Sheriff Joe Arpaio and convicted on a felony count of having false identification, and that was the basis by which then, suddenly now, she’s been deported with her two U.S.-born children, and her husband here still in the United States. So this is obviously a growing problem if you expand the definition of the dangerous felony folks that are subject to deportation to include, as you say, hundreds of thousands, if not millions, of people who have had to resort to a false identification in order to be able to work, which is why they came here in the first place, isn’t it?

SEN. KEVIN DE LEÓN: That is correct, Juan. Again, you know, President Trump campaigned on the promise that he would actually deport very dangerous criminal felons. But the reality is this: With the executive orders and with Kris Kobach, Stephen Miller, as well as Steve Bannon, they have their sights set on hard-working residents of California and other parts of the country—New York, Florida, Texas and elsewhere.

The case in Arizona, the case of this young woman, Guadalupe, who is married, who has been a resident of Arizona for a very long time, since childhood, who has two American-born children, teenagers, I believe, routinely checked in with ICE authorities. And then, all of a sudden, the tone, tenor, the attitude of ICE changed quite dramatically after the January 20th inauguration of President Donald Trump. She clearly is not a gang member. She’s clearly not a violent offender. She’s clearly not a rapist or a thug or a murderer. But nonetheless, ICE detained her. She submitted herself to check in with them on a voluntary basis, and now has been deported.

This is not who we are as a nation, and this not who we are as a state, like California. We don’t separate children from their mothers, and mothers from their children. It’s un-American. And these are not the values that we uphold as the greatest nation in the entire world. It is my deep concern that he is instilling, he is planting the seeds of fear, of mistrust, of anxiety, of chaos. But I am especially concerned about young children, because you have young children, boys and girls, who are deeply fearful that at the curbside, when they’re waiting for their mothers or their fathers, will they actually show up to pick them up, or have they been detained by ICE agents because they have a broken taillight or they have an expired driver’s license? These are not criminals. These are individuals who make up the fabric of who we are as the greatest nation and the greatest state in the world.

JUAN GONZÁLEZ: And, Steve Choi, I’d like to ask you, in terms of what’s happening here in New York, and also is there really a substantial difference between what’s going on now in the first weeks of the Trump administration and what was occurring under the Obama administration?

STEVEN CHOI: Well, there’s a little bit of a difference here. I mean, the fact is, under the Obama administration, you saw hundreds of thousands of people being deported. And I think that’s a problem that we need to really understand in terms of context.

STEVEN CHOI: Millions, hundreds of thousands of people every single year. In fact, the Obama administration, at one point, in one year, deported nearly 400,000 people. So this kind of activity has been occurring. The problem, though, with ICE saying that these are simply routine operations is that we are in a moment that is anything but routine. We have a president who, as candidate, ran the single most anti-immigrant campaign in the history of the United States. And it’s a president who, in his very first week of his presidency, declared war on immigrant communities. He has said that he is going to ramp up enforcement activity and deportations, he’s going to triple the ICE force, he’s going to expand greatly the number of kinds of offenses that people can commit. And we’re really talking about potentially 25 million people in this country who potentially could be deported, according to his executive order. So the idea that ICE turns around and says, “Look, these are just routine operations. We should not be in fear. People should not be engaging in hysteria,” there’s a little bit of blaming the victim going on. It’s their actions in this moment, and in this time of the administration, that is causing this kind of fear.

California vs. Trump: Lawmakers Push to Become “Sanctuary State” Despite Threats from Washington

NEXTCalifornia vs. Trump: Lawmakers Push to Become “Sanctuary State” Despite Threats from Washington 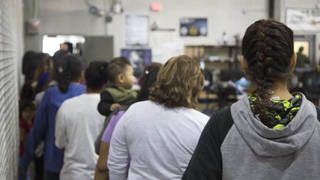 “Release Is Only Way to Save Lives”: Migrant Families Face Separation as COVID Spreads in ICE Jails