Over four years ago, NSA whistleblower Edward Snowden warned that he or other NSA analysts could spy on anyone, even the U.S. president. “I, sitting at my desk, certainly had the authorities to wiretap anyone, from you or your accountant to a federal judge, to even the president, if I had a personal email,” Snowden said in an interview with Glenn Greenwald in Hong Kong. We talk to Greenwald about the difference between how Washington reacted to Snowden’s leaks and today’s leaks about Gen. Michael Flynn.

StoryDec 05, 2019Edward Snowden: If I Came Back to the U.S., I Would Likely Die in Prison for Telling the Truth

NERMEEN SHAIKH: Well, Glenn, I want to turn to something NSA whistleblower Edward Snowden said to you nearly three years ago, when he first spoke out against NSA abuses.

EDWARD SNOWDEN: Any analyst at any time can target anyone, any selector anywhere. Where those communications will be picked up depends on the range of the sensor networks and the authorities that that analyst is empowered with. Not all analysts have the ability to target everything. But I, sitting at my desk, certainly had the authorities to wiretap anyone, from you or your accountant to a federal judge, to even the president, if I had a personal email.

NERMEEN SHAIKH: So, Glenn, can you talk about that and the response that was received to the leaks of Edward Snowden compared to now, the leaks of intelligence officials now?

GLENN GREENWALD: So, on the question of the eavesdropping powers of the NSA as revealed by the intercepts of General Flynn’s communications, we don’t actually know for certain what the methodology was that was used to eavesdrop on him. Was the NSA legally, pursuant to a FISA warrant, targeting General Flynn as part of an investigation, either an intelligence investigation or a law enforcement investigation, conducted by the FBI? Were they, as they claim, only doing routine surveillance on officials of an adversary country—in this case, Russia—and just coincidentally and by accident happened to catch the conversation that General Flynn was having with those targets of the surveillance in Moscow? We don’t know.

But what this does illustrate is—let’s assume for the moment that the NSA and the CIA for once are actually telling the truth and that the way that they eavesdropped on General Flynn was not by targeting him, but by targeting the Russians with whom he was communicating. What this reveals is something very important, which is, when the Edward Snowden story first broke and the debate around the world was triggered, the U.S. government kept saying over and over, “If you’re an American citizen, we can’t listen in on your calls unless we first get a warrant from the court, and therefore there’s nothing you have to worry about.” Now, that was a very warped sort of thing to say, because that meant that for 95 percent of the world who are called non-Americans, what the government was saying: “Oh, for you, you have no protections. We can listen in on your calls at any time without getting a judge to approve,” which is actually true. And that’s one of the reasons why people all over the world outside of the United States were so horrified to learn of what the NSA was doing. But the broader and more important point is that what the U.S. government was saying was actually completely false. The U.S. government constantly eavesdrops on the telephone calls of American citizens without getting a warrant of any kind, despite what the Constitution requires. And that’s because the law that was enacted in 2008, called the FISA Amendments Act, with President Obama’s approval, with—he was a senator at the time, he voted for it—actually authorizes the U.S. government to listen in on Americans’ calls with no warrant, as long as they’re talking to someone outside of the United States who the government says they’re targeting. And that’s what this episode shows, is they were able to listen in on General Flynn’s calls, if you believe them, with no warrant, because they say that they were targeting someone with whom he was communicating.

As far as the reaction is concerned in terms of how Edward Snowden’s leaks were received versus this leak, it’s like night and day. I have not yet heard, literally, not one Democrat condemn the leakers inside the CIA or the intelligence community who leaked signals intelligence and, in the process, alerted these Russian officials to the fact that their communications have been compromised. That’s what these leaks did. They told these Russian officials with whom General Flynn was communicating, “We have successfully penetrated your communications systems.” And you can be sure that they are now, in response, fortifying the communications that they use and blocking out the NSA and CIA. There was probably harm done by whoever did this leak. I haven’t heard one Democrat condemn it on the grounds that it’s criminal. I haven’t heard one Democrat say that there should be an investigation to find these leakers and put them in prison for violating the law. And yet, all I heard from Democrats—not all I heard, because there were a lot of Democrats who supported Manning and Snowden and Drake—but certainly Democratic officials in D.C. were almost unanimous, under Obama, in saying that leaks—leakers should be prosecuted to the fullest extent of the law, that they’re traitors. Chelsea Manning just spent seven years in prison under harsh conditions for leaking information way less sensitive than what these leakers about General Flynn just leaked. And, yes, President Obama commuted her sentence, but only after his administration imprisoned her, under conditions that the U.N. said was basically torture, and kept her in prison for seven years, even though there was no harm demonstrated from anything she leaked. So what Democrats seem to think is, leaks under President Obama, even if they show that high-level officials are lying, as Edward Snowden showed James Clapper was, are evil, are criminal, and the whistleblowers should be thrown in jail; leaks under President Trump, by contrast, are heroic and noble, and we should celebrate the people who are doing it and oppose any effort to hunt them down and investigate them and find them and punish them, as President Trump is vowing to do. The reality is that whistleblowers are a very valuable part of our democracy. They should be cherished and heralded and protected, regardless of which party controls the White House.

NERMEEN SHAIKH: And, Glenn, what about the Republican response? You’ve talked about the Democrat—Democratic Party response, but how did the Republican Party, for the most part, respond to the Snowden leaks versus what’s happened now?

GLENN GREENWALD: Well, ironically, the Republican response is actually consistent—consistently heinous, but at least it’s consistent. There were a few Republicans, usually former officeholders or some outliers in the Republican Party, like Rand Paul or Justin Amash, people from the libertarian wing, who were somewhat supportive of the Snowden leaks. But, overall, the Republican establishment was contemptuous of Edward Snowden. In fact, Mike Pompeo, the former Republican congressman who is now Donald Trump’s chief at the CIA, called for Edward Snowden’s execution. Donald Trump himself called for Edward Snowden’s execution. Lindsey Graham and John McCain and Marco Rubio all called Edward Snowden a traitor. So, in some sense, the Republicans are being consistent, because they’re now saying the same thing, which is that whoever leaked this information ought to be investigated, hunted down and punished to the fullest extent of the law, which is more or less the same thing they said about leakers and whistleblowers under President Obama. It’s the Democrats who have completely switched their position, as they so often do, the minute that the party controlling the White House changed.

AMY GOODMAN: We’re going to break and then come back to this discussion, also talk about what happened at the White House yesterday with the Netanyahu-Trump meeting and so much more. We’re speaking with Pulitzer Prize-winning journalist Glenn Greenwald, one of the founding editors of The Intercept. His piece in The Intercept, “The Leakers Who Exposed Gen. Flynn’s Lie Committed Serious—and Wholly Justified—Felonies.” Stay with us.

Greenwald: Empowering the “Deep State” to Undermine Trump is Prescription for Destroying Democracy

NEXTGreenwald: Empowering the “Deep State” to Undermine Trump is Prescription for Destroying Democracy 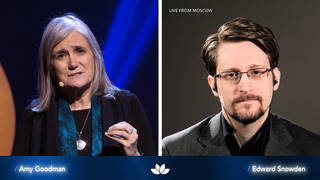