President Donald Trump on Wednesday ended a long-standing U.S. commitment to the establishment of a Palestinian state, saying he had no preference for either a one-state or two-state solution to the Israeli-Palestinian conflict. The remarks came as Trump welcomed Israeli Prime Minister Benjamin Netanyahu to the White House, and represented a break from 20 years of official U.S. support for an independent Palestinian state alongside Israel. We speak with Glenn Greenwald, who says, “Donald Trump is empowering some of the worst extremists in the world when it comes to Israeli policy.”

NERMEEN SHAIKH: On Wednesday, President Donald Trump ended a long-standing U.S. commitment to the establishment of a Palestinian state, saying he had no preference for either a one-state or two-state solution to the Israeli-Palestinian conflict. Trump’s comment came during a news conference at the White House with Israeli Prime Minister Benjamin Netanyahu.

PRESIDENT DONALD TRUMP: So I’m looking at two-state and one-state, and I like the one that both parties like. I’m very happy with the one that both parties like. I can live with either one. I thought for a while the two-state looked like it may be the easier of the two. But honestly, if Bibi and if the Palestinians—if Israel and the Palestinians are happy, I’m happy with the one they like the best. As far as the embassy moving to Jerusalem, I’d love to see that happen. We’re looking at it very, very strongly. We’re looking at it with great care. Great care, believe me. And we’ll see what happens. OK?

NERMEEN SHAIKH: So that’s President Trump speaking yesterday at a joint news conference with Israeli Prime Minister Benjamin Netanyahu. Glenn, could you respond to that and what the significance is of Trump suggesting a significant, massive change to many, many years of a U.S. policy on this?

GLENN GREENWALD: So, I guess I question, first of all, the extent to which it really is such a massive change in U.S. policy. It is, of course, a huge departure rhetorically from what the U.S. government has said for decades, which is that their policy is there ought to be a two-state solution. The reality, though, as any honest person involved in this conflict or who watches it admits, is that the two-state solution has been dying, and, in fact, probably dead for many years. It’s just that nobody wants to admit it. If you look at a map, it’s almost impossible to see where a separate Palestinian state in the West Bank can be created, given the growth of settlements under Prime Minister Netanyahu, growth which, by the way, the United States not only didn’t stop, but abetted by shoveling Israel with money, with weapons, with all kinds of diplomatic support, as they were expanding those settlements. Yes, they objected occasionally, in rhetoric, but, in action, never did.

And so, I think the two-state solution is something that we’re all eager not to give up on, because the alternatives are both so bad. But the reality is that in Israel there is an erosion of support for the two-state solution. There are high-level members of President—Prime Minister Netanyahu’s Cabinet, high ministers, who explicitly oppose it. The reality is that because of the course Israel has taken, the only two options that are real—and it’s essentially what Donald Trump, in his own kind of stumbling, inept, ignorant way, was getting at, was the only two options are: have Israel become an apartheid state, where a minority of Jews have political rights and control a country in which a majority of citizens have no political rights, exactly like was true of apartheid South Africa, or have one state in which all citizens have political rights, in which case Israel would no longer exist as a Jewish state. Neither of those options are good ones, but that is the course that Israel is taking. And what Trump is saying is, essentially, if the Israelis and Palestinians want a certain solution, we, the United States, are not going to prevent them from doing that.

What is really worrying is that Donald Trump is empowering some of the worst extremists in the world when it comes to Israeli policy. His son-in-law, who’s in charge of it, is a supporter of some of the hardest-core settlements in the West Bank. And Congress is taking up this week his nomination of a hardcore pro-settlement lunatic to be the U.S. ambassador to Israel. Just this morning, five ambassadors, former ambassadors to Israel, of both parties, came out and opposed him on the grounds that he’s essentially insane. And so, I do think there’s a dangerous tilting toward extremists in Israel on the part of the Trump administration. But the two-state solution has really only existed in rhetoric for a long time. And on some level, a lot of supporters of Palestinian rights think it’s actually a good thing to finally have that candid admission that a two-state solution is not really possible anymore because of Israeli behavior.

Trump Is Asked About Rising Anti-Semitism in U.S., He Responds by Boasting About Election Victory

NEXTTrump Is Asked About Rising Anti-Semitism in U.S., He Responds by Boasting About Election Victory 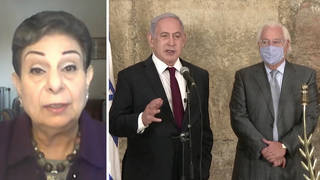