United Airlines is facing widespread criticism after video surfaced of a doctor being forcibly dragged off a plane by security officers on Sunday, after United overbooked the flight and then demanded some passengers disembark. The flight was leaving from Chicago O’Hare International Airport and was headed to Louisville, Kentucky. When no one volunteered to get off the flight, the 69-year-old man was selected to be forced off the plane. He protested, saying he was a doctor who needed to see patients at a hospital in Kentucky the following morning. The Washington Post reports a fellow passenger says, “He said, more or less, ’I’m being selected because I’m Chinese.’” Multiple Chicago Department of Aviation security officers then began dragging him through the aisle as fellow passengers screamed. After being removed, the man, who was bloodied by the first removal, attempted to run back onto the plane. He was then forcibly removed a second time. For more, we speak with Sherrilyn Ifill, president and director-counsel of the NAACP Legal Defense Fund, and Norm Stamper, the former chief of the Seattle Police Department and the author of the book “To Protect and Serve: How to Fix America’s Police.”

AMY GOODMAN: We both—we have to get both of your comments to what happened on United Airlines—it is just so astounding—and the models for policing that are extending throughout the different police forces. People may have seen this on TV, United Airlines facing widespread criticism after video surfaced of a doctor being forcibly dragged off a plane by security officers on Sunday. After United overbooked the flight, they said, “Would anyone volunteer to be rebooked?” No one did. And so then what they claimed is they randomly chose four people. The flight was leaving from Chicago O’Hare International Airport, headed to Louisville. When no one volunteered to get off the flight, the 69-year-old man, the doctor, was selected to be forced off the plane. He said, no, he couldn’t go; he was a doctor who needed to see his patients in a hospital in Kentucky the following morning. The Washington Post reports a fellow passenger says, “He said, more or less, ’I’m being selected because I’m Chinese.’” Multiple Chicago Department of Aviation security officers dragged him through the aisle as fellow passengers screamed.

SECURITY OFFICER: Get up! Get up! Put your hands up.

PASSENGER 1: No! My god! What are you doing?

PASSENGER 2: You busted his lip.

AMY GOODMAN: After being removed, the doctor, who was bloodied by the first removal, attempted to run back onto the plane. He was then forcibly removed a second time. Now the United Airlines CEO has apologized for, quote, “having to re-accommodate these customers,” unquote. I mean, this is an astounding story. They were actually asking four people to leave and then dragged this doctor off, to replace them with four United Airlines employees. First, Norm Stamper, you’re the former police chief of Seattle. This is a different department that’s in charge of the airlines.

NORM STAMPER: Well, we’re looking at airline security people. One can reasonably question what kind of temperament, what kind of training, what kind of policies guide their work. I think, needless to say, this is a public relations disaster for a major corporation. But it also raises the question of how we deal with people under difficult circumstances, when there is tension, when there is conflict. And I’ll go back to the Seattle consent decree. The police officers themselves are saying, “I’ve never had better training,” referring to de-escalation training, crisis intervention training, “in my entire career,” helping them on the home front dealing with their own families, their children, their spouse, that sort of thing. So here we have some people who are probably not well trained in what they have been asked to do. And they’re doing it very, very badly.

AMY GOODMAN: I can’t remember the word they used, the airline, something like “forcible deboarding.” He had a paid ticket. Is the idea that all United Airlines customers will now—I mean, I was just in a plane yesterday. When they say, “Would anyone volunteer?” everyone’s going to raise their hand, because they don’t want to be bloodied and perhaps knocked unconscious?

And I worry, as, you know, Americans increasingly are being subjected to seeing things like people violently dragged by police officers next to them as they have out cellphone videos—this is almost like the police killings—we’re being—we’re being almost kind of inured to this violence that we’re seeing, you know, every place we go. This is in an airplane. And people are witnessing this. This is becoming part of American life. And that’s why I say if we don’t really get serious and turn against this, we will find that this becomes regularized around us. For a while, people were shocked by the cellphone videos of police killings and people—the police shooting people in the back. Now we’re seeing this kind of thing. This is why we have to stand against this attempt to kind of return us to this kind of ultraviolent policing in this country.

AMY GOODMAN: Before we go, Sherrilyn, I wanted to offer our condolences on the death of your cousin—

AMY GOODMAN: —and share her words, the award-winning journalist, the legendary news anchor, Gwen Ifill. She died of cancer in November at the age of 61. This is Gwen speaking in 2015 at the Aspen Ideas Festival about the issue of American identity.

GWEN IFILL: I was born of immigrants who came to this country from the West Indies. I have incredible appreciation for people who thought it was—who did the bold act of uprooting themselves from everything they knew in order to make a better life for their children. We were the, like Michele’s father, craziest patriots on the block. It never occurred to us that we weren’t American. In fact, we had chosen to become Americans, which seemed like a very empowering thing. But as—in my current role, as I report, day after day after day, all of our shortcomings in America, our shortcomings as Americans, I struggle, not with my patriotism or my love of the country, but to figure out how can we get over the humps. Not the conversations, not the roundtables, but how do we see each other? How do we begin to see ourselves and then see each other? It’s so hard.

AMY GOODMAN: So, that was Gwen Ifill, Sherrilyn, your remarkable cousin.

SHERRILYN IFILL: Yes, she is remarkable, was remarkable. I’ve never seen that clip. But that’s her. Thank you.

AMY GOODMAN: Well, thank you for sharing her with all of us. Sherrilyn Ifill, NAACP Legal Defense Fund, head of it; Norm Stamper, former chief, Seattle Police Department, thanks so much for joining us.

This is Democracy Now! When we come back, does President Trump personally profit off of airstrikes like the one in Syria, the Tomahawk cruise missiles? What’s his connection? Stay with us. 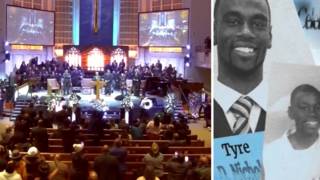