A viral Facebook video posted by the Lake County Sheriff’s Department in Florida shows Sheriff Peyton Grinnell, surrounded by four masked men wearing sheriff’s department uniforms and Kevlar vests, warning people who deal drugs: “To the dealers that are pushing this poison, I have a message for you: We’re coming for you.” For more, we speak with Sherrilyn Ifill, president and director-counsel of the NAACP Legal Defense Fund.

JUAN GONZÁLEZ: Sherrilyn, I wanted to ask you about this whole issue of his emphasis now on drugs, as well—

JUAN GONZÁLEZ: —because, clearly, not only is that out of step, but it’s out of step with the reality of how drugs are spreading in the country today. The drug problem in America today is in rural areas. It’s opioids, and it’s heroin. It’s not as much in the inner city as it used to be. Is he going to now oversee the breaking down of doors and the—a huge increase in law enforcement activities in the rural areas of America against white people who are now on drugs?

SHERRILYN IFILL: I’m going to guess no. But what I am going to say is that this is, again, about kind of being in that time machine. And this is really the tragic consequence, I think, of this policy. The policy that Jeff Sessions is advancing, actually, as you say, has nothing to do with the way in which the drug problem manifests itself in our country today. And what he’s suggesting as a solution will not meet the problem. And so, even as—you know, while the president was campaigning, he talked about, you know, drug addiction and has talked about the need to deal with drug addiction. The policy that Jeff Sessions is suggesting actually won’t reach the opioid epidemic. Not only will it not reach the opioid epidemic because it focuses on law enforcement rather than treatment, but because it also kind of thinks that there’s this simplistic “Just say no”—you heard him refer to Nancy Reagan—”Just say no” way in which we’re going to deal with the drug problem. Everyone now knows that the way in which we dealt with the drug problem in the '80s and the ’90s was very much racially biased, very much did not meet the problem, didn't deal with the issue of education, didn’t deal with the issue of treatment and didn’t deal with the issue of the underlying conditions in communities that create and make people vulnerable to the drug problem. And so, what Jeff Sessions is suggesting is something that just simply won’t meet the problem.

What he’s hoping to do is to change the narrative in this country. You know, we just heard the train has left the station in terms of law enforcement. The train has also left the station in terms of thinking about drug addiction. And what he’s trying to do is shift and turn the narrative back. And that’s why we’ve got to resist this. I think most people in the country actually recognize that we can’t go backwards in policing, and we can’t go backwards in those kinds of drug policies. The question is: Will we allow Jeff Sessions—particularly, will police departments, if he offers them, you know, funds and money and resources, allow themselves to be sucked back into something that they know does not work? When you look at the crime problem in places like Baltimore and Chicago, part of it has to do with a lack of trust of the community because of unconstitutional policing. People aren’t calling the police to tell them information about crimes. They’re not standing with the police, as a community must if you’re really to solve crime problems. They know that part of the way you reduce crime is you build trust between the relationship and the police. And the way you build that trust is that police officers have to begin by ending unconstitutional policing, showing respect for the community and engaging in sound law enforcement policies.

SHERIFF PEYTON GRINNELL: To the dealers that are pushing this poison, I have a message for you: We’re coming for you. As a matter of fact, our undercover agents have already bought heroin from many of you. We are simply awaiting the arrest warrants to be finalized. So, to the dealers, I say, enjoy looking over your shoulder, constantly wondering if today is the day we come for you. Enjoy trying to sleep tonight, wondering if tonight’s the night our SWAT team blows your front door off the hinges. We are coming for you. If our agents can show the nexus between you, the pusher of poison, and the person that overdoses and dies, we will charge you with murder. We are coming for you. Run.

AMY GOODMAN: Part of a video posted by the Lake County Sheriff’s Department in Florida on Facebook. The video has now been viewed on Facebook over a million times. People have compared the image of the sheriff with the men behind him with their heads covered to ISIS. Sherrilyn Ifill?

SHERRILYN IFILL: I can’t imagine how he thinks that that might be effective, first of all, that he thinks people who deal drugs are actually watching Facebook videos of him. This performance was meant not for actually people who are involved in the illegal drug trade. It was actually meant for members of the law-abiding community, to reassure them, to make them feel that there’s this massive force out there that’s going to protect them. And, you know, everything that we see in that video is a setup for unconstitutional policing. You know, “We’re going to blow the hinges off your doors.” We’ve looked at the cases in which, you know, SWAT teams have made these terrible mistakes, have blown the hinges off the wrong door, and resulted in the death of children and others as they enter people’s homes. So, once again, that’s the—that’s the community—

AMY GOODMAN: We’re seeing that with ICE, as well.

JUAN GONZÁLEZ: I’d like to ask Norm Stamper: What about this issue of SWAT teams like this? And The New York Times did a series about SWAT team raids around the country. Your sense of the militarization of the police, and this approach to policing, the impact it has on communities?

NORM STAMPER: We have certainly seen a heightening of the militaristic mentality in law enforcement. It’s fueled by the drug war, of course, which has been a colossal failure on every front. And in the aftermath of 9/11, this interest in homeland security is manifest by the federal government providing military surplus, MRAPs and automatic weapons and semiautomatic weapons and so forth, to law enforcement. Well, if you have those tools—some call them “boys with toys”—if you’ve got those tools, you want to use them. And so they manufacture reasons to conduct those predawn raids in which so many innocent people have been shot and killed. Police officers have been caught in the line of fire, as well. What I just saw in that video was an embarrassment to law enforcement.

AMY GOODMAN: You had the story in Chicago on March 28th of ICE, an agent with Immigration and Customs Enforcement, shooting and injuring 53-year-old Felix Torres after the agents burst into the family’s house. His daughter Carmen says the family was sleeping when agents burst through the door. She said, “They came in, pointed pistols in our faces, dragged us out. We didn’t even have time to dress or grab milk for the baby.” Felix Torres was hospitalized in serious condition after the ICE shooting. And then ICE said, “Oh, he wasn’t the man we were looking for. We went to the wrong house.”

SHERRILYN IFILL: This is what I think Attorney General Sessions will unleash on this country, if we are not vigilant and if we are not seriously resistant to this. His theory that there are a few bad apples in police departments is an interesting one. Even if he were right that there were not systemic problems and that there are a few bad apples, what he’s doing is giving license to the bad apples. He’s saying, “Go out there and be cowboys and do whatever you want to do.” And there are going to be lots of people who are hurt by this. 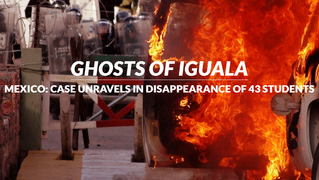