Part 2 of our conversation with Sharif Abdel Kouddous about today’s White House meeting between Donald Trump and Egyptian President General Abdel Fattah el-Sisi. Human rights organizations say Sisi and his security forces have arrested tens of thousands of Egyptians and have committed torture, forced disappearances and extrajudicial killings. The Trump administration has indicated it will not bring up the human rights abuses during today’s meeting.

AMY GOODMAN: This is Democracy Now!, democracynow.org, The War and Peace Report. I’m Amy Goodman. President Trump meeting with Egyptian President General Abdel Fattah el-Sisi at the White House today, even as Sisi faces widespread criticism for human rights abuses in Egypt. Human rights organizations say Sisi and his security forces have arrested tens of thousands of Egyptians and have committed torture, forced disappearances and extrajudicial killings. The Trump administration has indicated it will not bring up the human rights abuses during today’s meeting, as we return to Cairo to speak with Democracy Now! correspondent, Nation fellow Sharif Abdel Kouddous.

SHARIF ABDEL KOUDDOUS: Well, if you follow the pro-state media in Egypt, they have very loudly celebrated Sisi’s relationship with Trump, the fact that Sisi is the first Arab leader to be received at the White House, the fact that Trump—that Sisi was the first person to call Trump. They’ve also exaggerated these wild claims that Trump won because Sisi endorsed him and things of this nature. But, you know, it’s hard to get a sense of the national mood from the pro-state media. They represent a very narrow portion of the state and the political and economic elite.

You know, there’s widespread dissatisfaction with Sisi, not just because of human rights abuses, but because the economy is really on the brink of collapse. And there is skyrocketing inflation. Prices are going through the roof. There’s massive debt that this government has taken on. There’s austerity measures, including subsidy cuts and tax increases, that have been put in place to secure a very stringent $12 billion IMF loan. There’s also a $3 billion World Bank loan. There’s been shortages of sugar and baby formula.

And all of this comes as the military has injected itself more directly into the economy. It’s expanded its domination of many economic sectors in the country. And you have to understand, in Egypt, military generals manage these monopolistic enterprises, which are conglomerates that are untaxed and unaudited and have multiple interests, including construction and pharmaceutical plants, land sales, cement and steel factories. They receive massive no-bid contracts from the government. And they’ve also—they don’t use these revenues to pay for massive and lavish arms procurements. We’ve signed almost $2 billion worth of arms deals with France, and instead of using those revenues, the army took out huge loans from French banks and then asked the Finance Ministry, the civilian Finance Ministry, to secure those loans.

So, this is spiraling the economy into a very difficult situation, and so I think most—most Egyptians—Sisi has lost a lot of popularity because of these policies that are disproportionately affecting the majority poor. Again, it’s hard to speak for most people, but I think, you know, people would like some kind of acknowledgment of the complete crackdown on any and all dissent here in Egypt. The freeing of so many prisoners—you know, when we say tens of thousands of prisoners, each one of these people is a story. You heard the story earlier about Aya Hijazi. It’s almost difficult to describe what it was like to see her in the defendant’s cage. But there’s so many like her. There’s journalists, like Shawkan, who’s been in prison since August 2013. There’s journalists who have been sentenced to life in prison. There’s Alaa Abd El-Fattah and icons of the revolution, who are still behind bars.

And all of this happens with the complete consent of the United States in terms of its continued military backing, its continued support of the Egyptian government. Again, there is, you know, Trump—the Trump administration has talked of rebooting the relationship with Egypt. We’ll have to see whether this is more of a glorified photo op, that there is a difference in rhetoric. Trump does want to restart something called the Bright Star, which is a biennial massive military exercise that took place with Egypt and other countries. But the core of the relationship hasn’t changed in decades, whether it was under Mubarak, under the Supreme Council of the Armed Forces, under Morsi or now under Sisi. And that is continued diplomatic, military and economic support for the country and very little criticism of human rights abuses.

AMY GOODMAN: Sharif, you wrote about how human rights groups are targeted and have been targeted by a large and sophisticated phishing campaign, referring to Nile Phish. Explain what you’re talking about.

SHARIF ABDEL KOUDDOUS: Well, phishing is a form of hacking—you know, it happened in the United States with the Podesta emails—where you receive an email in your inbox that purports to be from, you know, say, Google or Adobe or something like that, and you’re requested to put in your credentials—your email address and your password—in order to see the file. But, in fact, the operator of the phishing attack gets your password and then hacks your account. And the leading human rights groups in Egypt—almost all of them are—in fact, all of them are part of this massive criminal prosecution that has been going on for years—were hit with a very sophisticated phishing attack late last year, and it continued into early this year, where emails would come in that were, you know, timed after—for example, one woman, a prominent human rights defender, Azza Soliman, was arrested, and just moments later, a lot of these human rights advocates, her friends, got emails purporting to be the police arrest file—something that most people would want right after she was arrested. And so, this was the kind of sophisticated attack that is done. The human rights group in Egypt that documented these attacks says this was a government attack. They don’t have absolute proof, but they say the level of sophistication, the timing of it, and also given the government’s history of probing further into the internet and using different kinds of targeting and different kinds of technology, that this was a government attack.

And I must say, this is part of a much larger and much more repressive campaign against all civil society in Egypt, particularly ones that document human rights, that document economic abuse. And so, we’ve seen at least 20 of the most prominent human rights defenders—many have been on Democracy Now!, like Hossam Bahgat and Aida Seif El Dawla and Gamal Eid and others—they have been subject to travel bans. They’re not allowed to leave the country. They’ve had their assets frozen. And they’re facing criminal prosecution, this glacial trial that’s taking place, where they’re accused of foreign funding to destabilize the country. And Sisi changed, in a decree a couple of years ago, that statute in the penal code where foreign funding, you know, to destabilize the country or harm national security, or these very vague—these very vague terms, carries a life sentence. And so, for many of us who know these people well, who respect very much their work, the important work that they do, we can only watch as this trial goes forward.

AMY GOODMAN: Sharif, we just have 40 seconds. How did Sisi rise to power?

SHARIF ABDEL KOUDDOUS: Sisi came from military intelligence. He was the youngest person on the Supreme Council of the Armed Forces when the revolution took place. And he was appointed by Mohamed Morsi, the elected president, to become the new defense minister, replacing Tantawi, who was the longtime defense minister under Mubarak. And then, in 2013, he, himself, ousted Mohamed Morsi. And he said he wouldn’t run for president, and a year later he did, won by, you know, an astonishing 98 percent, well, because there was really no opposition against him.

AMY GOODMAN: I want to thank Sharif Abdel Kouddous for joining us, Democracy Now!’s correspondent in Cairo, Nation Institute fellow. This is Democracy Now!, democracynow.org, The War and Peace Report. 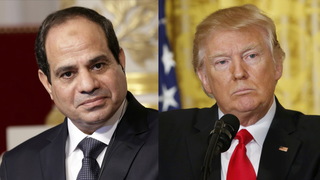