FCC head Ajit Pai has outlined a sweeping plan to dismantle net neutrality rules, which seek to keep the internet open and prevent corporate service providers from blocking access to websites, slowing down content or providing paid fast lanes for internet service. For more, we speak with Craig Aaron, president and CEO of Free Press.

StoryDec 18, 2017Net Neutrality Advocates on Next Steps After FCC Vote: “This Fight is Far from Over”

AMY GOODMAN: On Sunday, comedian John Oliver dedicated nearly 20 minutes of his HBO program to explain that net neutrality is under threat. He directed much of his criticism to FCC Chairman Ajit Pai.

JOHN OLIVER: Pai’s main argument is that we don’t need Title II to have net neutrality. But some of his ideas for what to have instead are almost laughably lax. For instance, he reportedly floated just having ISPs voluntarily agree not to obstruct or slow consumer access to web content by putting that promise in their terms of service—you know, the things that no human being has ever read, and that can change whenever companies want them to. That idea would basically make net neutrality as binding as a proposal on The Bachelor.

AMY GOODMAN: That’s John Oliver, who ended his show by calling on his viewers to write to the FCC, just as he did after a similar segment in 2014. Once again, the enormous response broke the commission’s website. So, Craig Aaron, talk about net neutrality, what it means, and what it means under a Trump administration and Ajit Pai, the chair of the FCC.

We fought a fight—I’ve talked about it many times on this show—over 10 years to push the FCC to pass strong net neutrality rules and have clear legal authority to enforce them. And the Trump FCC has really declared war on those rules. The chairman has said he wants to take a weed whacker to them. He’s trying to undo the rules passed at the end of the Obama administration, undo the rules supported by millions and millions of Americans, just to give Comcast, Verizon and AT&T more ability to create special fast lanes for their own content, to favor the content and sites and services that they own or who they’re in business with, and cut off competitors, undermine the competition, make it harder for independent voices to be heard, really damage the amazing tools that so many political organizers have used to build social movements using the free and open internet. All of this is at risk if we lose net neutrality.

Now, the good news is, it is easier said than done. They actually have to build a case for doing this. They have not done that so far, but they are starting the process. So, here, in a couple weeks at the FCC, Ajit Pai is going to move to reopen these rules, make new rules. We’re certainly going to be there at Free Press with all of our allies, speaking out in opposition and preparing the case against what Ajit Pai is going to do on all fronts, whether that’s Congress, the courts, at the agency itself. This net neutrality victory was an incredibly important victory for free expression, for the public interest. And Donald Trump’s FCC is prioritizing taking it away.

JUAN GONZÁLEZ: And, Craig, what about this claim by the FCC, because after the—after the Oliver broadcast, that they were—their site crashed. They claimed that they were victims of a denial-of-service attack. And you would think that if anyone had sufficient bandwidth to take in public comments, it would be the Federal Communications Commission. That’s their job. And your response to their claim that they’ve been victimized by an attack?

CRAIG AARON: You know, I really don’t know. What I would—what I would urge the FCC to do is, if that is indeed the case, they should share the logs of what happened, so people can understand, if they indeed did come under attack, because, given the timing, you can’t help but question: Were they under attack, or was it actually just an attack of democracy, with so many people coming in, trying to make their voices heard, and the FCC being unprepared? The FCC should be better prepared. They need to open up these systems so the public can actually comment. Congress needs then to give them the money to be able to do that. These are important things. So I am skeptical of those claims, but I would certainly hope the FCC will share what exactly happened. And hopefully they’ll get the support they need to secure their systems and actually give people the time and the space to make their voices heard. And really what the FCC needs to be doing is make it a lot easier for the public to weigh in. They have a lot to say. They care about the future of the internet. Millions and millions of people are going to speak out in this proceeding. And the FCC shouldn’t be, you know, closing off its ears because of technical difficulties.

AMY GOODMAN: Craig, I want to turn to the FCC Chair Ajit Pai speaking at the Newseum last month. During his speech on the future of internet regulation, he attacked your group, Free Press.

AJIT PAI: Consider, for example, the leading special interest in favor of Title II: a spectacularly misnamed Beltway special interest called Free Press. Its co-founder and current board member makes no effort to hide the group’s true agenda. While he says that we’re not at the point yet where we can completely eliminate the telephone and cable companies, he admits that—and I quote—”the ultimate goal is to get rid of the media capitalists and the phone and cable companies and to divest them from control.”

CRAIG AARON: Well, I appreciate being called the leading group. Besides that, you know, obviously, this is the kind of sort of neo-McCarthyism and red-baiting that we thought we left in the past. The reality is that Free Press, for 10 years, has fought for the free and open internet, advocated for net neutrality, and there are thousands and thousands and thousands of pages filed at the FCC, op-eds published, emails sent. Our website is filled with content saying exactly why we stand where we do and exactly what we want, which is actually just a free—the free and open internet. So if they want to go dig around the internet to find out-of-context quotes from one of my board members, I guess that says a lot about the chairman and his priorities. We’re happy to have this fight and win on the facts.

JUAN GONZÁLEZ: And what would—what would the internet look like if these forces prevail and net neutrality is abolished?

CRAIG AARON: Well, I think the simplest way to think about it is that the internet, the free and open internet and all that it offers, starts to look a lot like cable TV, where a company picks and chooses the channels for you, decides what’s going to get the best service, decides what’s available in a package. And everything that makes the internet so great, the fact that anyone with a great idea can go online, start their own business, find their own voice, make their own art, that’s really in jeopardy if you lose this fundamental protection of net neutrality. And suddenly these companies will have free rein to interfere however they want, often in ways that would almost be impossible for the average user to see or recognize.

AMY GOODMAN: Craig Aaron, we want to thank you for being with us, president and CEO of Free Press.

And that does it for our show. Oh, a special congratulations to Democracy Now!’s video fellow Andre Lewis, who just won a New York Emmy for his work at News 12 in Brooklyn profiling Brooklynites.

And we continue with our Democracy Now! Covering the Movements Changing America tour. I’ll be speaking tonight at McNally Jackson Books here in New York at 52 Prince at 9:00 p.m. On Wednesday, I’ll be at Town Hall in Seattle at 7:30 p.m. Back in New York Friday, I’ll be speaking at The New School at the Tishman Auditorium at 7:00 p.m. On Saturday, we’ll be in Oregon. Well, we’re starting in Olympia, Washington, at the Capitol Theater at 11:00 a.m., then at Powell’s Books at Cedar Hills Crossing in Beaverton, Oregon, right next to Portland, Saturday night at 5:00 p.m., then off to California, stopping in Eureka, in Berkeley in the evening at the Presbyterian Church, Santa Cruz on Monday, then on to Palo Alto, San Diego, Los Angeles, Santa Barbara. We’ll be in Tempe, Arizona. We’ll be in Santa Fe, New Mexico, and, finally, on May 20th in Houston, Texas. And, by the way, you can check all the tour at democracynow.org.

Net Neutrality Advocates on Next Steps After FCC Vote: “This Fight is Far from Over” 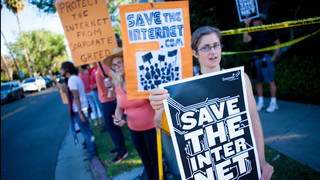 Net Neutrality Advocates on Next Steps After FCC Vote: “This Fight is Far from Over”