The Beleaguered Tenants of “Kushnerville”: Jared Kushner Accused of Slumlord Practices in Baltimore

“The Beleaguered Tenants of ‘Kushnerville.’” That’s the headline of a recent piece in ProPublica about the real estate dealings of Trump’s son-in-law and White House senior adviser Jared Kushner. The piece looks at how Kushner’s former company Kushner Companies has acted as a “neglectful and litigious” landlord of low-income housing units in Baltimore. ProPublica reporter Alec MacGillis chronicles how Kushner Companies hounded low-income tenants with a barrage of lawsuits, eviction notices and late fees—even when the tenants were in the right. Tenants also described terrible maintenance practices, which created nearly unlivable conditions for some families.

JUAN GONZÁLEZ: “The Beleaguered Tenants of 'Kushnerville.'” That’s the headline of a recent piece in ProPublica about the real estate dealings of Trump’s son-in-law and White House senior adviser Jared Kushner. The piece looks at how Kushner’s former company Kushner Companies has acted as a, quote, “neglectful and litigious” landlord of low-income housing units in Baltimore.

AMY GOODMAN: ProPublica reporter Alec MacGillis chronicled how Kushner Companies hounded low-income tenants with a barrage of lawsuits, eviction notices and late fees, even when the tenants were in the right. Tenants also described terrible maintenance practices, which created nearly unlivable conditions for some families.

Alec MacGillis, welcome to Democracy Now!, joining us from Baltimore, where you exposed this story. Tell us what you found.

ALEC MACGILLIS: Well, what I found was just way beyond what I was even expecting when I first started looking into these complexes. Jared Kushner’s family company has 15 of these complexes in Baltimore, with about 8,000 units. It’s by far his biggest concentration of sort of downscale rental holdings in the entire country. And what I found when I looked into the court system, just to check and see if they had any cases in the court system, was just an incredible profusion of cases that the company had brought against tenants and former tenants, hundreds and hundreds of cases, more than the court system could even display at one time. And basically, what the company has been doing for the last five years, since it bought these complexes, is going after just about any tenant they possibly could to squeeze more money out of them for back rent or having allegedly broken a lease, even in cases, as you said, where the tenant really was in the right.

JUAN GONZÁLEZ: And, Alec, many of these tenants were what’s called Section 8 tenants in that they were getting housing vouchers from the federal government to pay their rent. But Jared Kushner has said he wouldn’t weigh in on any policy having to do with Section 8. Do you still see any potential for conflicts, given how much his family’s company was invested in and using these Section 8 certificates, which are now probably the biggest public housing expenditure of the federal government?

ALEC MACGILLIS: No, there’s definitely concern around this. He has—the White House has said that he would abstain himself from any policy debates around Section 8 funding, but you can never be sure with this White House if that word will hold true. The fact is that in the current budget, the Trump administration budget, the cuts to Section 8 funding, while large, are not nearly as large as the cuts to actual public housing funding for actual public housing authorities. And with this White House, one of course can’t help but wonder if there’s some connection back to the fact that the Kushner company does rely so much on Section 8 funding for these complexes.

AMY GOODMAN: The company is called JK2 Westminster LLC. Explain Jared Kushner’s relationship to it, and then tell us the story of a tenant.

ALEC MACGILLIS: So, JK2 Westminster is indeed the name of the entity through which they were bringing a lot of these cases. And Jared Kushner—and it’s the—one can only presume that the JK stands for Jared Kushner, although the company would not confirm that. Jared Kushner had a very pivotal role in buying these complexes. He, you know, has been—was in the process of inheriting this company from his father, and this was one of his big moves to make these purchases. He saw them as just a wise, very lucrative and prudent financial investment to buy all these complexes.

One of the people that I came across with an especially, you know, just very upsetting story was a young woman, a single mother of three, who moved out of one of the complexes because her—the elderly woman next door was just becoming incredibly hard to deal with, banging on the door at night, waking up her baby, just acting very strange. So she got permission—this young woman got permission to move out. She got written permission to move out. She gave the proper notice and all that. She moves out. A couple years later, she starts getting court notices in the mail saying that a company that she never heard of, JK2 Westminster, was suing her in court for several thousand dollars for having left her lease early. She unfortunately did not have a copy anymore of that written permission that she had received. The court ruled against her. With the late fees and interest in all that, it came to $5,000. There’s no—she could not afford that. She was a home health aide working minimum wage. Her wages started being garnished. Her bank account was garnished. She was completely cleaned out, went broke. She finally did manage to get a copy of that form showing that she had permission to move out, and that did not help her in court. The court remained unmoved against her. She ended up getting a big court lien against her. Her credit record has been ruined by this whole thing. It’s just been extraordinary. And this was just—this was very typical of the kind of thing that the Kushner Companies was doing with former tenants.

JUAN GONZÁLEZ: And, Alec, what was the strategy behind these acquisitions? You normally associate the Kushners with more upscale development. Was this an attempt to gentrify these developments and renovate them, or was it basically to milk the existing tenant base without doing much improvements of the complexes?

ALEC MACGILLIS: It was really more the latter, actually. These complexes were seen as a way to generate cash flow for the company. The company is, of course, better known for its very high-end holdings in Manhattan. Those holdings tend to be very highly leveraged, lots of—lots of debt. These complexes were—in essence, kind of provided ballast to the company, just a very steady cash flow. When you think about it, the rents in these apartments are not high by Manhattan standards. We’re talking about $1,000, $1,100, $1,200 a month, typically. But you multiply that by 8,000 units just here in Baltimore, and then you add on all this extra revenue coming in from this very aggressive legal pursuit of tenants, and it really starts to add up.

AMY GOODMAN: And what was the response of the Jared Kushner company? And how has he changed his relationship with JK2 Westminster LLC since he became a chief adviser to President Trump, his father-in-law?

ALEC MACGILLIS: Well, Jared Kushner did step back from the company back in December or January. He stepped down from his role as the CEO of Kushner Companies. And his father, Charles Kushner, is now back in that title. But Jared has retained virtually his entire stake in these real estate holdings, whether these downscale apartment complexes or the higher-end stuff. He’s retained the vast majority of those stakes. His stake in the company is estimated as being as much a $600 million.

As far as the company’s response to my questions, it was very blunt. They said these are—”We were going after these tenants because these were—these are contracts that they’ve signed, these leases, and we were simply upholding the contracts.” They did not have specific responses to some of the specific cases I brought to them, like the case of the young woman I just described. They also said that what they were doing was in line with industry behavior; however, I talked to a lot of people in the industry who described to me—well, characterized this behavior as being sort of on the outer edge of what’s considered normal in the world of sort of downscale apartment complexes.

AMY GOODMAN: Alec MacGillis, I want to thank you for being with us, reporter for ProPublica. His piece appeared in The New York Times with the headline “Jared Kushner’s Other Real Estate Empire.” This is Democracy Now!, democracynow.org, The War and Peace Report. I’m Amy Goodman, with Juan González. 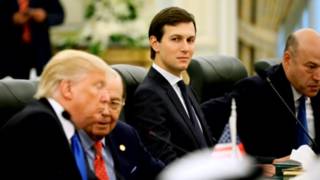