We speak with Dave Archambault II, 45th chairman of the Standing Rock Sioux Tribe, and Nick Tilsen of the Thunder Valley Community Development Corporation, who are in New York City for the Standing Rock Sioux to receive the inaugural Henry Wallace Award, which comes with a $1 million investment in renewable energy projects, like wind and solar, from the Wallace Global Fund. “What would be a dream or goal is to have all 12 communities powered off of renewables,” says Archambault. “At the community level, then at the national level, if tribes, Native tribal nations can say we are 100 percent powered and 100 percent that we consume renewable energy, that builds awareness for other communities and then maybe the nation.”

StoryJul 07, 2020“A Dream That Comes True”: Standing Rock Elder Hails Order to Shut Down DAPL After Years of Protest

AMY GOODMAN: Chairman Dave Archambault, talk about what it is you’re doing now just a few miles from the Dakota Access pipeline, where the oil is flowing. The fossil fuel industry has succeeded in building that. But what are you now doing at Standing Rock?

DAVE ARCHAMBAULT II: We have over 12 communities on Standing Rock. What would be a dream or goal is to have all 12 communities powered off of renewables. But we have to start somewhere. And the best place to start is in Cannon Ball, because it’s so close to where this pipeline is, where this fossil fuel bane exists. And so, at the community level, then at the national level, if tribes, Native tribal nations can say we are 100 percent powered and 100 percent that we consume renewable energy, that builds awareness for other communities and then maybe the nation.

AMY GOODMAN: So how are you doing this, with wind and solar?

DAVE ARCHAMBAULT II: With the solar panels, we’re starting off with a 300-kilowatt project. On the commercial wind side, we have a resource, and that’s the wind, that can generate a lot of electricity in the Great Plains. And so, how do we develop it to where—to where the tribe is actually the owner of the project and not the investors or the developers? So we need to take a more active role, and so we’re exploring different ways to be the actual owners once this is developed.

AMY GOODMAN: Of a wind farm?

DAVE ARCHAMBAULT II: Of a wind farm. And it will be a commercial wind farm, so that we’re talking like 100 megawatts, producing on average maybe 40 to 50 megawatts annually. So we’ll be able to take those—that power and sell it commercially and then use the resources to offset or to evolve our homes, so that they can provide heat in a good way, rather than burning fossil fuels.

AMY GOODMAN: And, Nick Tilsen, what does this mean to you in Pine Ridge to have this kind of project?

NICK TILSEN: Eight of the—eight of the 12 poorest communities in all of America are in North Dakota and South Dakota, and they’re all tribal communities. So this pipeline and projects—this pipeline, Keystone—Keystone XL pipeline, they’re not only just going through the heart of Indian country, they’re going through ground zero for inequity in America. They’re going through ground zero for poverty in America. And so, what we’re basically saying is we’re not just against these pipelines. We’re against these pipelines. We’re against—we believe that these pipelines are pipelines to the past. And we believe that we should be building sustainable infrastructure for the future, and so that we have the potential and we have the opportunity in tribal nations, like they’re doing in Standing Rock and like we’re doing on Pine Ridge with Thunder Valley—is building the communities of tomorrow and beginning the process of just transition and what that looks like.

AMY GOODMAN: Nick Tilsen is with the Thunder Valley Community Development Corporation, a citizen of the Oglala Lakota Nation on Pine Ridge Reservation in South Dakota. We were also speaking with Chairman Dave Archambault. Chairman Dave Archambault is the 45th chairman of the Standing Rock Sioux Tribe. They were both in New York for the Standing Rock Sioux to receive the inaugural Henry Wallace Award, which comes with a $1 million investment in wind and solar projects, in renewable energy projects, from the Wallace Global Fund. Federal Judge James Boasberg ruled Wednesday the Trump administration failed to carry out an adequate environmental review of the Dakota Access pipeline. Judge Boasberg will decide next week on whether the pipeline should be shut off until the completion of a full review of the potential impacts of an oil spill.

When we come back, Congressman Keith Ellison, co-chair of the House Progressive Caucus, the first Muslim member of Congress. Stay with us. 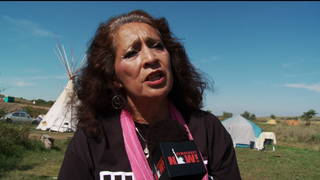 “A Dream That Comes True”: Standing Rock Elder Hails Order to Shut Down DAPL After Years of Protest