For decades, Kashmir has been one of the most militarized zones in the world. It’s also a territory that, according to acclaimed Indian writer Arundhati Roy, is nearly impossible to capture in nonfiction writing. But Roy has not shied away from writing about Kashmir in her second novel, “The Ministry of Utmost Happiness,” which has just been published.

AMY GOODMAN: Arundhati, you said that you actually lived with these communities, these resistance groups, in Delhi, outside your home. You live in Delhi also.

AMY GOODMAN: Talk about what you mean, spending days there, and also your times going to Kashmir.

ARUNDHATI ROY: You know, the thing is that Delhi is a place where all these groups from all over India come, to Jantar Mantar, this place called Jantar Mantar, where, in the past, they were allowed to stay there. So, many people would be on hunger strike—the people from Bhopal, the people from the Narmada Valley resisting the dam, people who are, you know, resisting displacement for some mining project, just dreamers who are on fast for everybody and for the, you know, world peace. And a lot of these movements shelter, you know, people who are just idealists who have kind of gone over the edge but who dream of a better world in the most charming and beautiful ways. And sometimes it’s—there’s a lot of violence. The police will come and beat up people.

So, I—I mean, obviously, because I was, you know, closely involved with the anti-dam movement and—I just would just go there, and I found it a very—you know, a place—though it’s a place of resistance, it’s also a place of peace, where you think—you know, people who are just not—who just don’t agree to allow things to roll on. So, it was also a place where I felt at home and a place where I talked to a lot of people. I mean, many of them are characters in the book—pamphleteers, you know, art installations, whatever.

So—and, of course, Kashmir is—you know, the mothers of the disappeared in Kashmir are also in the book and in that place. And the baby appears actually right next to them, and so there’s this whole thing about how the mothers of the disappeared don’t know what to do with a baby that has appeared, you know? And then, one of—Tilottama is a character who actually just picks up the baby and runs, you know, because the police have come. And Anjum wants her, the baby, and that’s how kind of it gets connected. And Tilo has a long connection with Kashmir.

ARUNDHATI ROY: How do—

AMY GOODMAN: For people who aren’t familiar with Kashmir, here in the United States, who are watching or listening now or who will read this, explain. Put that struggle in context, where it is and why it’s happening.

ARUNDHATI ROY: Well, Kashmir was—at the time of independence, in 1947, Kashmir was one—Jammu and Kashmir was one of the independent princely kingdoms, one of the 500-and-something princely kingdoms, who were all required to decide whether they wanted to be with India or Pakistan. And Kashmir, of course, had a majority-Muslim population but a Hindu king. And it’s called the “unfinished business of [partition],” because, you know, initially, the king didn’t decide while partition and bloodshed was happening—also in Jammu, which is part of the state of Jammu and Kashmir. And then, eventually, he fled to India and signed a secession based on the fact that there would be a referendum, which there never was. And so it’s, as I said, called the unfinished business of Pakistan [sic], but—I mean, of partition.

But so, India and Pakistan have been fighting over it, and it’s become a toxic situation, a flashpoint. The Indian Muslim population is, of course, held hostage to all the debates between India and Pakistan in Kashmir. And we’re talking about two nuclear powers. So, you’re talking about a place with—proliferating with graveyards. In the '90s, the struggle turned militant. The army was fighting militants. Now the population has turned militant. Recently, the army general said that he wished the people who are throwing stones were actually firing at them, so he could do what he liked with them. Just last month, they tied a Kashmiri civilian to a tank, used him as a human shield, and the officer who did that was rewarded, was honored, and many people in India applauded it. And that's by no means the worst thing that has happened there.

NERMEEN SHAIKH: Well, Kashmir and Kashmiri is just one of the languages—I mean, in the literal sense—that appear in this novel. You also cite a number of Urdu literary and poetic traditions and sources in the book—lyrics, poetry, songs. And what do you think the importance is to all of these references—Muslim, Dalit, Kashmiri—at a time when India’s image often is projected as much more homogenous?

ARUNDHATI ROY: So, I mean, I have written about this in nonfiction a lot, but right now what we are seeing is a very, very dangerous moment in India, because, since 1925, the forces—the organizations that—I mean, mostly an organization called the RSS, to which Modi belongs, to which many prime ministers and ministers belong, and which is really the cultural guild that controls the political party, the BJP, has always said that it wants India to be declared a Hindu nation, just as Pakistan is known as an Islamic republic. But India’s constitution calls it a secular socialist republic.

So, right now, the people in power are almost in a position to be able to change the constitution. History is being rewritten. School textbooks are being rewritten. People who believe that India should be a Hindu nation are being placed in all the institutions of democracy in positions of power. And as you know, every day you’re hearing stories about lynchings, about killings, about vigilante groups. So you have minority populations—and by minority, I’m still talking about millions of people—being forced to live in terror, being pushed to the bottom of the food chain, being unrepresented in the media, unrepresented in the judiciary, unrepresented in the bureaucracy, unrepresented in any way, you know. The moment of the big Dalit parties, like the BSP, led by Mayawati or Lalu or Mulayam Singh Yadav, which seemed to be bringing some sort of representation, have also been pushed out. And the idea is, and always has been, to create this constituency called the Hindu constituency.

And now the difficulty is that if you’re going to celebrate the idea of the Hindu nation, you’re turning what is pain into pleasure, when things like the demonetization happen, when jobs are being lost, when people are being displaced, and you’re told you are doing this for the Hindu nation. So, all your pain is being turned into some kind of yearning, like some kind of religious sacrifice, and all your anger is being directed downward to the most vulnerable communities. And so, it’s a psychological muddle, you know, which analysis and numbers and figures and facts don’t seem to help, you know?

AMY GOODMAN: We’re going to break and then come back. Prime Minister Modi will be meeting with President Trump next Monday at the White House. We want to ask you about that, also ask you about your trip to Russia to see Edward Snowden, with John Cusack and the Pentagon Papers whistleblower Daniel Ellsberg, and continue talking about your great work. The Ministry of Utmost Happiness is Arundhati Roy’s second fiction book. Her first, The God of Small Things, she wrote 20 years ago. For it, she won the Booker Prize. It catapulted her into the, what, literary stratosphere. This is Democracy Now! We’ll be back in a minute.

AMY GOODMAN: That was Leonard Cohen’s “Winter Lady.” In Arundhati Roy’s novel, one of the main characters, Musa, jokes that Leonard Cohen is actually Kashmiri, and his real name is Las Kone. This is Democracy Now!, democracynow.org, The War and Peace Report. I’m Amy Goodman, with Nermeen Shaikh. Before we talk about Modi’s visit next week, I did want to ask you about Tilo, the young woman you referred to who is a character in your book, The Ministry of Utmost Happiness, Arundhati, who has a lot of similarities to one you. She was trained as an architecture student. And talk about that. Talk about her place and your place in this novel.

ARUNDHATI ROY: Well, actually, to me, Tilo, Tilottama, is the fictional child of Ammu and Velutha in The God of Small Things, had their story ended differently. She’s the younger sibling of Esthappen and Rahel. So, you know, I know her well, but I’m not her.

But she’s—yeah, she and Anjum are, in some ways, you know, women with such different kinds of strengths and moods, you know, and generosities, and very different in that Anjum is much more external in her expressions of pain or grief or joy or poetry and what she wants to do. She’s an extravagantly—outwardly expresses herself. And Tilo, in the book, is called the city—a country who lives in her own skin, a country with no consulates, a person whose quietness destabilizes people, you know, a person whose most intimate—whose signs of being intimate with someone is to not greet them or, you know, to not change her expression when someone she loves comes. So, very different.

But, most of all, different in the—in their attitude towards womanhood. Like Anjum finds a young child on the steps of the Jama Masjid, and she just falls in love with her, an abandoned little girl, and she falls in love with her mostly because the baby just holds her hand and starts howling and isn’t scared of her. So she takes her back to the Khwabgah, where she’s adopted, called Zainab. And Zainab grows up with lots of mothers and fathers and in this unorthodox way. Tilo, on the other hand, is someone who’s a little bit wary of motherhood. She could have a baby and—but she doesn’t want it. And she doesn’t want to put another version of herself into the world. She thinks that she’ll be an even worse mother than her mother was to her. And she’s also curiously alone. Like she has a relationship with Musa, who becomes a militant in Kashmir. And Musa is a man of his people. And she loves that about him, because she thinks that she has no people, except for the dogs that she feeds in the park. So she’s very, very strange—strong woman, though, you know? And a little bit—a little bit on the edge of crazy. But, yeah, that’s who she is. 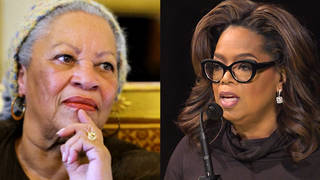