As Republicans continue their push for their healthcare plan, polls show support for a nationwide single-payer healthcare system is growing. At least one poll shows a full third of Americans are now in favor of a national single-payer system, while 60 percent believe the federal government should be responsible for healthcare. In one state, the California Senate passed a single-payer bill, but the House speaker killed it in the Assembly. We get an update from Michael Lighty, with National Nurses United and the California Nurses Association.

StoryJul 22, 2020As COVID Spikes in California, Latinx Workers Who “Keep the State Going” See Up to 5x the Deaths

AMY GOODMAN: This is Democracy Now!, democracynow.org, The War and Peace Report. I’m Amy Goodman. Earlier this month, the California state Senate passed a bill that would establish a single-payer healthcare system for the entire state. The proposal, called the Healthy California Act, was later killed by state Assembly Speaker Anthony Rendon, even though the plan had widespread support. A poll commissioned by the California Nurses Association found 70 percent of all Californians are in favor of a single-payer plan.

For more, we go to Berkeley, California, to be joined by Michael Lighty, the director of public policy for National Nurses United and the California Nurses Association.

So, Michael, can you talk about this growing movement? I mean, at the national level, you now have Senator Warren who just came out in The Wall Street Journal saying she’s for single payer. Of course, Senator Bernie Sanders of Vermont has also said the same thing, though he hasn’t introduced the latest bill. But in California, this debate has been raging. What happened?

MICHAEL LIGHTY: Well, Amy, it is quite remarkable, because we got single payer passed through the state Senate on June 1st, 23-14 vote. And we have huge momentum. I think ultimately we had 400 organizations who were with us in the Assembly—in the Senate, rather, for the bill and continuing to support it. We’ve had major demonstrations all over the state, town halls in every region in California. There is a huge groundswell for this reform. And it’s exactly why we need to do it, as pointed out by your previous story. This inaction, in this case, literally means death. California, governed by Democrats, two-thirds majority in both the Assembly and Senate, with a Democratic governor, must act urgently to prevent the worst impacts of this GOP health plan from coming true in California.

AMY GOODMAN: Well, explain what was passed in the California state Senate. Explain exactly what single payer or Medicare for all is.

MICHAEL LIGHTY: Essentially, what we do is we’re able to eliminate all insurance company premiums, deductibles and copays, and have a new entity, what we call the Healthy California, provide healthcare through paying providers. So we eliminate all the waste and inefficiency of the present system. We’re able to reimburse providers based on Medicare rates. We’re able to pay comprehensive benefits, complete choice of provider, as we eliminate the insurance company premiums, deductibles and copays and replace that with public financing. Currently, 70 percent of healthcare expenses in California are paid by taxpayers. We’re just not getting our money’s worth. And so, what a single payer does is essentially use the leverage of everybody in one system to contain prices, to guarantee healthcare for all Californians, including those who are undocumented. So it is actually the best type of reform, because we’re able to use those efficiencies to actually save money. We estimated $37 billion can be saved by going to this Medicare-for-all-type system in California.

AMY GOODMAN: And so, explain the politics of what happened in the state Assembly, although the state Senate passed it.

MICHAEL LIGHTY: Well, it’s pretty straightforward. Those deep-pocket interests that fund, including Democrats, are opposed to this bill. You’ve got—the healthcare industry has given the speaker, along with the insurance industry, over $700,000. And he’s the one who stopped progress on this bill. He’s essentially denied democracy on behalf of the healthcare industry. There are opponents of this that clearly have a great deal at stake. The insurance companies in California have earned $27 billion in net income. So, no surprise, Amy, that they want to hold onto those profits.

AMY GOODMAN: And what do you say to those who actually do support Medicare for all or single-payer healthcare but feel it cannot be done on a state-by-state basis? Explain how it would work if the country doesn’t have single payer, but California did.

MICHAEL LIGHTY: Well, it is parallel, in some sense. California is the sixth-largest economy in the country. And the governor is committed to being a major player in climate action. And so, he has the resources of the nation—of a nation to do that. We believe he also has the resources of a nation to guarantee healthcare for all Californians. Californians are entitled to the federal spending on healthcare for which they’re eligible, just as every other state. So, we’re going to get that money into California.

The Affordable Care Act, under the 1332 provision, is explicitly designed to enable states to set up single-payer-type universal healthcare systems. There’s a statutory language in there to do so. So those waivers, also under Medicaid, are available to channel those moneys. This administration, for its horror show on healthcare, the one thing that it does say that might be useful here is it’s in favor of state innovation. And certainly, there is nothing more innovative than saving people and businesses billions of dollars as we provide comprehensive coverage to everybody. So we believe there’s a statutory basis and a belief that we can do this in California, because we have the resources to do so.

AMY GOODMAN: So, I want to turn to Harvard professor John McDonough, who we’ve had on a number of times, a chief architect of what many call Romneycare in Massachusetts, the model for the Affordable Care Act. McDonough also was involved with the passage of the Affordable Care Act. When we spoke to him a few years ago, in 2012, McDonough said he supports single payer but doesn’t think it’s feasible.

JOHN McDONOUGH: I think a single-payer plan could be far preferable. The reality was that there was no possibility in 2009, 2010, of achieving passage of anything close to a single payer. And I think, really, the question is: Does the Affordable Care Act move the system forward by eliminating pre-existing conditions, by creating the Medicaid expansions, by undertaking so many other important improvements to the healthcare system, tripling the size of the National Health Service Corps, providing important new funding for community health centers, just many, many important provisions? … I think that, short of a single-payer system, that the Affordable Care Act was the best that we could get done and that it really will provide significant, meaningful, important improvements for the lives and the health and the well-being of many, many millions of Americans.

AMY GOODMAN: So, in your last response, Michael Lighty, if you could respond to what Professor McDonough says? And also talk about these polls, Pew saying about a third of Americans now are for single payer, maybe 60 percent believe the federal government should be involved with health insurance, guaranteeing health insurance.

MICHAEL LIGHTY: Yes, I think that’s exactly right, Amy. There is a groundswell for the federal government to guarantee healthcare for all. That is even stronger in California. Even after people hear the opposition arguments in California, 58 percent support this type of reform, this type of Medicare-for-all reform. We did meet with John McDonough and Senator Kennedy, when he was still alive, during the healthcare debate around the Affordable Care Act. We just disagree that the tax subsidy of the purchase of private health insurance is going to get us to universal coverage. The Affordable Care Act, still, at best-case scenario, 29 million uninsured nationwide. In California, that number is 2.7 million. But the real number is underinsured. Fifteen million Californians have such high deductibles that they cannot get the healthcare they need. So, in terms of health security, in terms of peace of mind, in terms of guaranteeing healthcare as a human right, we are not there. And that’s why we must keep pressing forward. And California can literally lead the nation in doing so, and we can prove to John and the other skeptics that, in fact, if we institute a policy that eliminates the nefarious role that insurance companies provide, we can guarantee healthcare for all. That’s really the evolution that we need to make from the Affordable Care Act.

AMY GOODMAN: Michael Lighty, I want to thank you for being with us, director of public policy for National Nurses United and the California Nurses Association.

This is Democracy Now! When we come back, author Naomi Klein on No Is Not Enough.

Naomi Klein: The Worst Is Yet to Come with Trump, So We Must Be Ready for Shock Politics

NEXTNaomi Klein: The Worst Is Yet to Come with Trump, So We Must Be Ready for Shock Politics 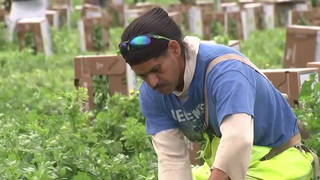 As COVID Spikes in California, Latinx Workers Who “Keep the State Going” See Up to 5x the Deaths