Jean Montrevil came to the U.S. from Haiti with a green card in 1986 at the age of 17, but a mistake he made when he was a teenager could now lead to his deportation. Last month, he went to his first check-in under President Trump. Without any advance notice, he was detained, handcuffed and processed to be deported, until calls from his supporters apparently prompted immigration officials to release him. On Thursday, he must check in again, and he’s concerned he will again be detained. We are joined by Jean Montrevil in studio, along with his eldest daughter, 18-year-old Janiah Heard, and his lawyer, Joshua Bardavid. Watch Part 2.

AMY GOODMAN: We end today’s show with a guest who says he made a mistake when he was a teenager that could lead to his deportation nearly three decades later. Jean Montrevil came to the U.S. from Haiti with a green card in 1986 at the age of 17. During the height of the crack epidemic, he was convicted of possession of cocaine and sentenced to 11 years in prison. He served that time. Upon his release, he married a U.S. citizen, had four children, became a successful small businessman, as well as an immigrant rights activist. He has had no further interaction with the criminal justice system. But because of his earlier conviction, Jean is required to check in with immigration officers regularly under a supervision program.

Jean joined us in 2010, after he was detained at one of these check-ins and came very close to being deported to Haiti. But when a fellow detainee on the plane bound for Haiti had a fever, the illness halted the flight. And then, in that week, the 2010 earthquake struck in Haiti. With the country too devastated to deport people to, Jean was released. Since then, he has continued to check in with no further threats of deportation, until last month, when he went to his first check-in under President Trump. Without any advance notice, he was detained, handcuffed, processed to be deported, until calls from his supporters apparently prompted immigration officials to release him.

Well, Thursday, tomorrow, he has to check in again, and is concerned he will again be detained and deported. This comes as Haiti, the poorest nation in the Western Hemisphere, continues to recover from the devastating earthquake of 2010. It’s also suffered from a disastrous hurricane and cholera outbreak. And this week, President Trump’s top immigration official warned members of Congress that Haitians living in the U.S. under a special temporary protected status may soon be placed in line for deportation. Last week, about 50 of Jean’s supporters participated in a Jericho walk organized by the New Sanctuary Coalition and marched silently around the federal building where he’ll check in, here in New York. Another Jericho walk is scheduled for Thursday, when he returns.

For more, we are joined by Jean Montrevil himself in studio, along with his eldest daughter, 18-year-old Janiah Heard, and his lawyer, Joshua Bardavid.

We welcome you all to Democracy Now!

JEAN MONTREVIL: Thank you, Amy, for having us.

AMY GOODMAN: Talk about what you face tomorrow, Jean.

AMY GOODMAN: You have lived here for 30 years.

AMY GOODMAN: Janiah, you wrote us a very poignant letter about your father. You’re in college now.

AMY GOODMAN: And talk about your concerns, what this means for family, for you and your siblings.

JANIAH HEARD: I don’t think they realize, like you come into people’s lives just to—basically, you’re going to turn our lives upside down, because no one should have to wake up thinking, “Well, am I going to be deported tomorrow or the next day?” And I don’t think my brother and sister, they don’t really understand it, because—maybe my little brother does, but my little sister, she wasn’t really—she was a baby when this first happened, so she doesn’t really get it now. So this is going to be really different for her. And she’s like a daddy’s girl. So, now, it’s going to be hard for her to go to school every day and—

AMY GOODMAN: Did your brother just undergo an operation?

JANIAH HEARD: Yes, he just undergoed brain surgery. They found a tumor, which they acted really quickly on it, and they took it out. And he’s doing very well now.

AMY GOODMAN: And what will this mean for you at college? Where are you going to college?

AMY GOODMAN: And, Joshua Bardavid, talk about why this is happening. Is ICE targeting Jean Montrevil?

JOSHUA BARDAVID: Well, Jean does have an order of deportation, which we’re working on trying to fix. I don’t think they’re necessarily singling him out. I think that some of the rhetoric from the senior members of the administration, including the president himself, have resulted in an increased enforcement across the board. But, unfortunately, there’s also been a lot of rhetoric regarding Haitians. And as a result, I do think that there’s been an increased targeting of Haitian nationals for deportation.

AMY GOODMAN: But there is a stay on the deportation of Haitians until January. Why is this happening now to Jean?

JOSHUA BARDAVID: I think November is why it’s happening now to Jean. What happened in November, the election, has resulted in a change in policy towards Haitians specifically.

AMY GOODMAN: Does Jean go to jail in Haiti if he is deported?

JOSHUA BARDAVID: That is a concern of ours. There have been reports that deportees to Haiti have been imprisoned.

AMY GOODMAN: What would that mean, Jean?

JEAN MONTREVIL: Well, once you get deported from here as a criminal alien, there’s a process you’ve got to go through in Haiti. You’ve got to be interviewed by the Haitian government, and then you have to have a family member to come and sign you off. I have no family in Haiti. All my family lives over here now, you know. And if you can’t get out, you’ve got to pay money to get out. They are making money off of criminal deportees in Haiti. And people have died in the Haitian jails.

AMY GOODMAN: I mean, I certainly remember the jail collapsing—

AMY GOODMAN: —at the time of the earthquake.

JEAN MONTREVIL: Well, I mean, I talked to a friend of mine in Haiti last week. He said people are dying in those jails. Those jails used to put 50 people. Now they have 400 peoples in it.

AMY GOODMAN: So, we have 10 seconds. What can happen tomorrow in the ICE check-in? What are you calling for, Joshua?

JOSHUA BARDAVID: We’re just asking for ICE to allow Jean to continue to check in, as he has been doing for years without incident.

JEAN MONTREVIL: For 12 years now, I’ve been checking in.

AMY GOODMAN: Well, we’re going to have to leave it there, but we’ll certainly continue to cover this case. I want to thank Jean Montrevil; Janiah Heard, Jean’s daughter; and Joshua Bardavid, his attorney. 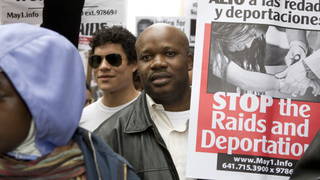