Rami Khouri: In Rift with Qatar, Saudi Arabia and UAE Want to Hold Back Waves of Change

Foreign ministers of Bahrain, Egypt, the United Arab Emirates and Saudi Arabia are meeting today amid a diplomatic standoff with the Gulf nation of Qatar. The Saudi-led coalition has issued 13 demands on Qatar, including the closing of the Al Jazeera TV channel. Other demands on Qatar include ending its support for the Muslim Brotherhood, downgrading diplomatic ties with Iran and closing a Turkish military base in the country. The diplomatic standoff began soon after President Trump met Saudi King Salman in Riyadh. For more, we’re joined by Rami Khouri, professor of journalism and senior public policy fellow at the American University of Beirut. He’s also an internationally syndicated columnist and a nonresident senior fellow at the Harvard Kennedy School.

AMY GOODMAN: Foreign ministers of Bahrain, Egypt, the United Arab Emirates and Saudi Arabia are meeting today amidst a diplomatic standoff with the Gulf nation of Qatar. The nations broke off relations with Qatar a month ago and imposed sanctions on the small Gulf country, accusing it of destabilizing the Middle East by backing militant groups including ISIS and al-Qaeda. Qatar has denied the accusations. The Saudi-led coalition issued 13 demands on Qatar, including the closing of Al Jazeera TV channel. Other demands include ending Qatar’s support for the Muslim Brotherhood, downgrading diplomatic ties with Iran and closing a Turkish military base in Qatar. On Monday, Qatar responded to the demands, but Qatar’s response has not been made public. Qatar’s foreign minister, Sheikh Mohammed bin Abdulrahman al-Thani, spoke in Germany.

SHEIKH MOHAMMED BIN ABDULRAHMAN AL-THANI: What we have seen, that the list is unrealistic, and we—it cannot be actioned. And it’s not talking about terrorism. Mainly, it’s talking about shutting the freedom of speech, infringing the sovereignty of a country, interfering in its affairs. There are a lot of items which any country can find it offensive within the international law and international norms.

AMY GOODMAN: The diplomatic standoff began soon after President Trump met Saudi King Salman in Riyadh. Trump has endorsed the isolation of Qatar, even though the Gulf nation is home to a major U.S. military base. He actually took credit for the isolation of Qatar, but Secretary of State Rex Tillerson has called for an end to the blockade of Qatar.

To talk more about the diplomatic standoff in the Gulf, we go to Beirut, where we’re joined by Rami Khouri, professor of journalism and senior public policy fellow at the American University of Beirut in Lebanon. He’s also an internationally syndicated columnist, a nonresident senior fellow at the Harvard Kennedy School.

RAMI KHOURI: Well, what’s happening is, essentially, the two most powerful countries in the Gulf—Saudi Arabia and the United Arab Emirates—are trying desperately to hold back waves of change all around the Middle East that they don’t like, and that other people don’t like, like the government of Egypt, that took power essentially through a military coup, and other groups around the world and around the region that want to maintain the old order that has ruled and ruined this Arab region for the last 50, 60 years. In other words, they are trying to stop popular activism, democratic elections, Islamist groups, who seem to represent a pretty clear majority of sentiments, peaceful nonviolent Islamist groups, like the Muslim Brothers, mostly. They’re trying to stop these kinds of things from happening—normal relations with Iran, things of that nature, and a free media, like what Jazeera represents. That’s the essential battle between the hard-line, regressive perceptions and aspirations of the Saudi and Emirati regimes, that just want to freeze the region like it has been for the last 50, 60 years, and other forces, including massive popular forces that erupted in uprisings six, seven years ago, that want to see an evolution with more dignity, more participation, more accountability, and ideally some more democracy, as well. That’s the essential battle.

The Emirati and Saudi pressures on the Qataris were very sudden and very fierce, and they have essentially gotten no support anywhere around the world of any significance. Briefly, Trump supported them. And then, when he was briefed about what actual American interests and policies are in the Gulf, he kind of pulled back from that a little bit. And Trump now has directly called the leaders involved and urged them to negotiate a peaceful diplomatic resolution of this conflict, which is the sensible thing to do.

And the Qataris have stood their ground, because they basically say these accusations are, first of all, mostly exaggerated or unfounded. Second of all, if there are accusations that have a grain of truth in them—for instance, the Saudis don’t want the Qataris to have ties with Iran—well, the reality is that Dubai in the UAE has much more trading relationships with Iran than Qatar does, and so does Kuwait and the Omanis, as well. So, there’s just a lot of hypocrisy in these accusations, and also a sense that this is predatory and bullying, that they’re trying essentially to get Qatar to follow the same policies as the Saudis and the Emiratis. And the Qataris won’t do it. And they’re holding their ground.

They’re getting a lot of support internationally. And they want to solve this peacefully. Just as—right now, as we speak on the air, the Qatari foreign minister is giving a briefing at Chatham House in London in which he’s explaining the Qatari position, in which he’s pointed out that some of the accusations that have some legitimacy—for instance, there may have been people living in Qatar who were on a banned U.N. list or something like that—he says, “Well, we’ve taken action on those.” So, the Qataris are not against responding to legitimate grievances, but the grievances and these nonnegotiable demands have been so fierce and brutal and exaggerated that they just have no credibility. And then the Saudis and Emiratis are pretty much stuck in a corner now. We’ll see what they’re going to announce later this afternoon in Cairo.

AMY GOODMAN: Well, Rami, I’d like to turn to Al Jazeera’s response to the accusations leveled against the network by Saudi Arabia and its regional allies. This is Giles Trendle, the acting managing director of Al Jazeera English, speaking to the BBC.

GILES TRENDLE: There are many accusations made against Al Jazeera, and I think all those accusations are a bit of a red herring. In the end, it’s about us providing fair and frank coverage. We’re not partisan to any particular group or ideology or government. We provide a diversity of different viewpoints and perspectives. And I think that’s a problem for some people in the region.

AMY GOODMAN: So, that’s the acting managing director of Al Jazeera English. Rami Khouri, your response? And do you see the possibility that Al Jazeera will be closed?

RAMI KHOURI: I don’t think there’s any real possibility. If they do close Jazeera, it would be quite a catastrophe. And essentially, it would say that Qatar has agreed to be a vassal state of the Saudi Arabians, like Bahrain has become a vassal state, and Egypt is dangerously close to being a protectorate of the oil-rich Gulf countries. And I don’t think it’s going to happen.

You know, the accusations against Jazeera, I’ve written about this quite a bit recently. These are really tangential issues. The complaints against Jazeera often are perfectly normal complaints against media organs. You know, a lot of people complain that Democracy Now! is a very left-wing, progressive-oriented station or program, and therefore they criticize you. Well, you have a right to be progressive. And somebody has a right to be Arab nationalist. Somebody has a right to be friendly with peaceful Islamists. And people have these views. Fox has a view. CNN has a view. You have a view. MSNBC has a view. And that—if those accusations are the best that the Saudis and Emiratis can come up with, then they’re able to understand now why nobody really is going along with them, and the whole world is standing up for Jazeera and the freedom of speech.

Freedom of speech is what masses of hundreds of millions of Arabs stood up and asked for in 2010, 2011. They were prepared to die, and thousands have died, asking for their dignity and their human rights and their social justice. They’re battling for these intangibles that they want to express, because they’ve not had a chance in the last 50, 60 years in most Arab countries to use their full mind and their intellect and their cultural capabilities. They’ve been controlled by governments, ministries of information, thought control colonels, and all kinds of institutions that essentially turn citizens into cattle or robots. And the governments of many Arab countries continue to do this.

And Al Jazeera represents the opposite. Jazeera is not the problem, and Qatar is not the problem. The Saudis and Emiratis and Egyptians have seen—have taken Jazeera as a proxy for Qatar and have taken Qatar as a proxy for the normal evolution of hundreds of millions of people in the Arab world who simply want to live as dignified human beings with a little bit more freedom, more participation, more accountability, a variety of friends all around the region, and letting the full human capabilities of people to express themselves to build strong, decent, peaceful, just countries. And this is really the problem that we have. Jazeera is not—is not the issue. Jazeera is just a proxy and a—

AMY GOODMAN: Rami Khouri, in the last minute we have, I want to ask you about this latest story in Lebanon, where you are, the two separate fires that tore through Syrian refugee camps, killing a small child, injuring scores of people. Can you tell us what’s happening there? Then we’ll continue in a post-show discussion.

RAMI KHOURI: Well, there’s over a million Syrian refugees in Lebanon that have come in over the last six years. Most of them are scattered in haphazard local communities that have been set up, unofficial camps. A lot of them are getting support from international agencies. And the government is helping out by opening schools and doing other things. But it’s quite a chaotic situation in the sense that there’s nobody really in charge of their well-being, and they don’t have many options to go back to Syria or to stay here permanently. Many of them can’t work. Some of them—many work illegally. They’re mostly poor. And the conditions are very haphazard, and, therefore, fires—we just had a very strong 10 days of intense heat, and, therefore, these fires break out. And you have the problem that some of these—

AMY GOODMAN: Rami, we have to leave it there, but we’re going to continue and post it online at democracynow.org. Rami Khouri, professor of journalism at American University in Beirut, thanks for joining us. 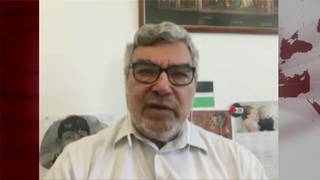