The White House is considering an unprecedented plan to privatize the war in Afghanistan at the urging of Erik Prince, founder of the now-defunct private mercenary firm Blackwater. Prince told USA Today the plan would include sending 5,500 private mercenaries to Afghanistan to advise the Afghan army. It would also include deploying a private air force—with at least 90 aircraft—to carry out the bombing campaign against Taliban insurgents. The plan’s consideration comes as a federal appeals court has overturned the prison sentences of former Blackwater contractors who were involved in a 2007 massacre in Nisoor Square in central Baghdad, killing 17 civilians when they opened fire with machine guns and threw grenades into the crowded public space. For more, we speak with longtime investigative journalist and activist Allan Nairn.

ALLAN NAIRN: Well, as you mentioned, Prince, Erik Prince, is proposing for Afghanistan that the U.S., under a viceroy, send him in as a private contractor with a private air force and the ability, using iPads, to call in airstrikes all over Afghanistan. I—

AMY GOODMAN: I want to turn to Erik Prince, so people can hear this, a very interesting discussion earlier this week that the former Blackwater CEO Erik Prince had with CNN’s Erin Burnett, talking about his plans, the proposal that he put forward to President Trump for Afghanistan.

ERIK PRINCE: You have to put someone in charge. There has to be a lead federal official, or, in this case, almost a bankruptcy trustee, that rationalizes the U.S. presence, that is in charge of all policy. Second, they have to stay there for a while, so you have that continuity of decision-making.

ERIN BURNETT: OK, so the word you used for that person was “viceroy,” was an American viceroy.

ERIK PRINCE: And I mean viceroy. That’s a colonial term. The last thing we—

ERIN BURNETT: It is a colonial term.

ERIK PRINCE: Sure. But that colonial term came from—in the British Empire, they had very little communications, and you had to put someone in charge that can make the decisions, absent a ship going back and forth. But in this case, it really means someone that can rationalize the basic mess that has U.S. policy been. Whether it’s in Afghanistan or Pakistan, we have gone backwards.

ERIN BURNETT: So, when we use the word, though, obviously—you point out it is a colonial word, right? The definition is a ruler exercising authority in a colony on behalf of a sovereign. In that case, Trump would perhaps be the sovereign, Afghanistan an American colony. I mean—

ERIN BURNETT: —it’s a loaded word. I mean, have the Afghans—

ERIK PRINCE: I say that—

ERIN BURNETT: Are they talking to you about this? Are they open to it?

ERIK PRINCE: I’ve talked to plenty of Afghans about this. When they understand that we’re not there to colonize, but merely the—that viceroy, that lead federal official term, is someone that will rationalize, so we don’t go through a commander every year, like we have been, or a different ambassador every two years or who—so, there’s been a complete fragmentation of unity of command. That has to change.

AMY GOODMAN: So, that’s the former Blackwater founder, Erik Prince, speaking with Erin Burnett on CNN, talking about an American viceroy, that he’s pushing for, that apparently Bannon supports, and McMaster, the national security adviser, and James Mattis—both generals—are opposed to. So there’s a real battle going on, and there’s a real defamation campaign going on by extremely conservative forces against H.R. McMaster to push this through. But an American viceroy and an even further privatization of the military, this coming the same week that the sentences for three of four Blackwater guards who opened fire, September 2007, on Iraqi civilians in Nisoor Square happened—the overturning of those sentences, and the fourth one, his murder conviction, overturned.

ALLAN NAIRN: Yeah. A few years ago, I met with President Ghani of Afghanistan, and I doubt that Ghani would be happy about Prince’s plan and him personally being put in charge of a private army there, partly because of his own criminal past, Blackwater’s criminal past in Iraq and elsewhere. But I think what Prince is talking about with a private corporate war could be the wave of the future, both in terms of Pentagon policy, subcontracting to corporations, but also, as the next stage, corporations having their own private armies. Many already have their own private police forces, dating back to the old Pinkertons and, as you saw at the Dakota Access pipeline, private police forces and paramilitaries. In the eastern Congo, in the mineral region, you have mining corporations making deals with local militias to, in effect, be their private armies. But you don’t yet have corporations, like, say, an ExxonMobil, that has its own air force that drops bombs and its own troops that go around with machine guns. But I think that—growing out of the kind of thing that Prince is proposing, I think that could be the wave of the future.

AMY GOODMAN: I want to go on with Prince. The Military Times reported that the Blackwater founder, Erik Prince, lobbied the Afghan government on a plan to assemble a private air force, including fixed-wing aircraft, helicopter gunships, drones, capable of close air support to ground forces. The plan would partly rely on an iPhone app called Safe Strike that soldiers could use to target airstrikes. Allan Nairn?

ALLAN NAIRN: Yeah, it’s—you know, Trump has already said, “Don’t ask the White House.” This is regarding U.S. operations in Iraq and Syria and elsewhere. “Don’t ask the White House. Use your own judgment in attacks.” And now, what he’s talking about is corporations using their own judgment in who to kill from the air, although, he says, under the guidance of a colonial viceroy.

AMY GOODMAN: We’re going to break and then come back to this discussion. We’re speaking with longtime investigative journalist and activist Allan Nairn. This is Democracy Now! We’ll be back in a moment.

AMY GOODMAN: “Mother of Exiles” by Vermont musician Peter Gould. We’ll post his whole song on our website at democracynow.org” about the poet Emma Lazarus, her poem “New Colossus,” that appears on the base of the Statue of Liberty, that was challenged by President Trump’s senior adviser Stephen Miller when he held a White House press briefing last week. 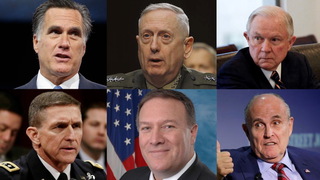