As residents of Mexico City gathered near an elementary and middle school and kindergarten that collapsed after Tuesday’s earthquake, some told Democracy Now! that help arrived late in poorer areas and that “help is still needed.”

Special thanks to Andalusia Knoll in Mexico City.

StorySep 20, 2017Hundreds Dead in Mexico After Earthquake Strikes on Anniversary of Devastating 1985 Quake

AMY GOODMAN: In Mexico, the death toll from the massive, magnitude 7.1 earthquake has risen to 250 people, as rescue workers continue to search for missing people amidst the rubble. The earthquake struck just hours after residents participated in an earthquake preparedness drill marking the 32nd anniversary of the 1985 earthquake that killed 5,000 people. Mexican President Enrique Peña Nieto has declared three days of national mourning. Tuesday’s quake caused scores of buildings and at least one school to collapse. On Wednesday, residents gathered at the site of collapsed buildings, hoping for news about their missing family members.

VANESSA RIVERA ROSALES: [translated] I am Vanessa Rivera Rosales, and I am looking for my brother in this building that fell down. He worked here, and we don’t know where he his. They told me that he is in a hospital with his wife, that they were able to get out of the building. But that is not true. His wife is in critical condition, but we don’t know if my brother went to look for my sister-in-law or where he is. We have been calling him, and it rings, but he doesn’t answer. If he was OK, he would have answered. This is all very sad. And we truly ask people to help us with supplies and water for all those that are here, and, if they know anything about Jaime Rivera Rosales, that they let us know, please.”

OBED MARTINEZ: [translated] My name is Obed Martinez. Something that I saw yesterday is that, sadly, our country keeps being a classist and racist country. Areas like this, which are a little more humble, the help has arrived late. I’m not saying very late, just late. Areas such as La Roma, Narvarte and Del Valle neighborhoods had more help and organizations organized by the neighbors. Here, you could see young people and other people helping. We have to be more human and stop recording with our cellphones. We have to dig with our hands to be able to do something.

FRANCISCO HERNANDEZ: [translated] My name is Francisco Hernandez. We are here at the elementary and middle school and kindergarten that collapsed here in Mexico City. We have many supplies and medicine and good medical help, but we still need more people. We are seeing that help is still needed. Sooner or later, more hands will be needed. There are still people alive here. After the earthquake, the school collapsed. The second floor fell through the first, even though a parked car prevented it from falling completely. And the soldiers here in Mexico City put a barricade so that it doesn’t fall any further. They have rescued many more people that are alive. That is very fortunate. 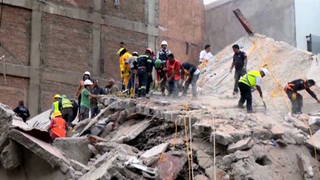