Supreme Court Justice Ruth Bader Ginsburg was at Sundance for the premiere of the new documentary ”RGB” and spoke to Amy Goodman about the her thoughts on the #MeToo movement and the Women’s March. When Ginsburg argued before the Supreme Court the first time in 1972, she quoted Sarah Grimke, the noted abolitionist and advocate of equal rights for men and women, who said, “I ask no favor for my sex. All I ask of our brethren is that they take their feet off our necks.” Goodman asked if this demand still stands.

AMY GOODMAN: Ann Reed singing “Ruth Bader Ginsburg,” here on Democracy Now!, democracynow.org, The War and Peace Report. I’m Amy Goodman. This is our first day of our week-long broadcast from the Sundance Film Festival here in Park City, Utah. One of the most talked-about documentaries here at the Sundance Film Festival looks at the groundbreaking life of the nearly 85-year-old Supreme Court Justice Ruth Bader Ginsburg. 2011 marks her 25th year on the court, and she has no plans to retire. Justice Ginsburg first gained fame in the 1970s when she co-founded the Women’s Rights Project at the American Civil Liberties Union, where she argued six gender discrimination cases before the Supreme Court. When President Bill Clinton nominated her in 1993, he compared her to another pioneering attorney and judge who went on to become a Supreme Court justice.

PRESIDENT BILL CLINTON: Many admirers of her work say that she is to the women’s movement what former Supreme Court Justice Thurgood Marshall was to the movement for the rights of African Americans.

AMY GOODMAN: In recent years, Justice Ginsburg’s public profile has soared as the court has swerved to the right. Ginsburg often now finds herself on the dissenting side of opinions. In 2013, she wrote a scathing dissent in Shelby v. Holder, a landmark case that eradicated a key part of the Voting Rights Act. She wrote, quote, “Throwing out preclearance when it has worked and is continuing to work to stop discriminatory changes is like throwing away your umbrella in a rainstorm because you are not getting wet.”

Dissents like that helped Ginsburg cement her role as a feminist icon. She gained the nickname “Notorious RBG,” which became the name of a best-selling book. She has been portrayed on Saturday Night Live. Details of her exercise workout routine have gone viral. And now she’s the subject of a feature-length documentary here at Sundance Film Festival simply called RBG. The film premiered on Sunday night, and none other than Justice Ruth Bader Ginsburg was in the audience to see the film for the first time. Afterward, she joined the directors, Betsy West and Julie Cohen, on stage, and it was there that I had a chance to ask her a question.

AMY GOODMAN: As you flew in to Sundance on Saturday, thousands of women around the country were marching, rallying and saying “Me, too” and “Time’s up.” And I’m wondering your thoughts on this movement and whether that demand you made so many decades ago, you feel, still stands—”take the boots off our necks”?

JUSTICE RUTH BADER GINSBURG: I was glad to see that happen, because the march, the first march, Women’s March, was hugely attended, and I wondered whether it would stop with that or whether the movement would continue. And I think yesterday was proof that it will continue. The more women who are out there doing things, the better off all of us will be for it. That’s something that my dear colleague Sandra Day O’Connor often said, that the responsibility of women of our vintage is to get out there and to make a good show. And the more women who are out there doing things, the more younger women will feel—will have the courage to go on. And I’m heartened by the number of women who will be in races for Congress and governorships and state legislative positions. So, it was a favorite expression of Martin Luther King: “The arc of the moral universe is long, but it bends toward justice.” And I added to that: Yes, if there are people who will strive with all their might to see it happen. 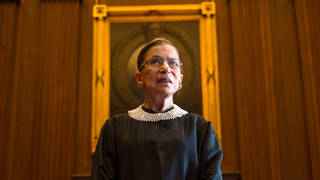