At least two people have died since Hurricane Michael made landfall in Florida and Georgia on Wednesday. It is the third most powerful storm to ever hit the U.S. mainland, and meteorologists say it is supercharged by warmer-than-usual water in the Gulf of Mexico. But Florida Governor Rick Scott has a long history of denying climate change. In 2011, his administration reportedly banned state employees in Florida’s Department of Environmental Protection from using the terms “climate change,” “global warming” and “sea level rise.” We speak with Gloria Horning, a social and environmental justice advocate. She serves on the Environmental Advisory Board for Pensacola, Florida.

NERMEEN SHAIKH: At least two people have died since Hurricane Michael made landfall in Florida and Georgia on Wednesday. It was the third most powerful storm to ever hit the U.S. mainland. The storm landed near Mexico Beach about 20 miles southeast of Panama City. It came ashore as a Category 4 storm with top sustained winds reaching 155 miles per hour.

The powerful storm remained a hurricane as it moved further inland. Despite this, advocacy groups reported that the Florida Department of Corrections had not evacuated at least a dozen prisons in mandatory evacuation zones as of Wednesday. The Carolinas are now bracing for more flooding, just weeks after the region was devastated by Hurricane Florence.

Meteorologists said Hurricane Michael was supercharged from the warmer-than-usual water in the Gulf of Mexico. The storm destroyed homes, snapped trees, downed power lines and flooded coastal towns. One resident of Panama City said the storm snapped trees like toothpicks.

ANDREW LAMONICA: I worked for the power company and retired, so I saw a lot of storm duty. But this one here was the worst I’ve seen. So, it was—it was good. You see what it did around here. It snapped trees like they were toothpicks. It was nothing to it.

GOV. RICK SCOTT: Hurricane Michael is the worst storm that the Florida Panhandle has ever seen and one of the worst power storms to ever make landfall in the United States.

The massive hurricane comes just days after the United Nations issued a major report warning humanity has only a dozen years to mitigate climate change or face global catastrophe, with severe droughts, floods, sea level rise and extreme heat set to cause mass displacement and poverty.

We go now to Pensacola, Florida, where we’re joined by Gloria Horning, social and environmental justice advocate, serves on the Environmental Advisory Board for Pensacola.

We welcome you to Democracy Now! Can you start off by describing the devastation in Florida?

GLORIA HORNING: Well, where I’m located, we really missed the bullet. Where the devastation takes place is about 80 miles east of here. But the issues that you just brought up is about climate change and the impact our coastal waters are seeing now with sea rise, warmer waters, waters coming in from our storm water drains from the bay, and then the impact of sewer breaks that go all over our communities. Our last hurricane, Gordon, we had 300,000 gallons of raw sewage displaced on minority communities.

NERMEEN SHAIKH: Why do you say—Gloria, why specifically on minority communities?

GLORIA HORNING: Well, they’re the last ones to be—our infrastructure is very, very old. And what is being replaced is being replaced in more affluent communities. And the community I live in, the Tanyard, is the oldest African-American community in Pensacola. And we’re constantly the sites of flooding. I sent you a couple of pictures of the water coming in our storm water drains. Now, that’s without any rain. The road in front of my house flooded just from the—what’s coming up in the bay into our storm water drains. And so, when it does rain and those two mix, the sewer sanitation can’t hold the capacity. So, we’re surrounded by about, I would say, 12 to 14 sewer heads, and they just blow.

NERMEEN SHAIKH: And, Gloria, what are the hardest-hit areas?

GLORIA HORNING: Mexico Beach right now is destroyed, just as it was in Opal. Panama City, we’re still getting information from that, but I do know that along the downtown area it was destroyed. And I’ve seen communities further up. You know, this thing traveled all the—it’s going into Atlanta, as well.

AMY GOODMAN: Can you talk about the response of—well, you’ve got the mayor, the mayor of Tallahassee, who is running for governor, Andrew Gillum. You have the governor, Rick Scott, who’s running for Senate against Bill Nelson, the sitting senator. And can you talk about their political stances on the issue of climate change, how you think that bears on Hurricane Michael and how they are dealing with this storm?

GLORIA HORNING: Oh, that’s a great question. In Escambia County, we’re one of the most polluted counties in the state, between coal, paper mills, unregulated illicit runoffs. And just to include, we’ve got 11 landfills in one community, and none of them are lined, so all that landfill juice is going down into our drinking water.

Andrew Gillum is all about climate change. He doesn’t believe it’s a hoax. He is working very hard with groups like I’m working with, the Flood Forum, which help people harmed by climate change and environmental abuse. And Andrew Gillum, I couldn’t be happier. Ironically, when I taught at Florida A&M, I taught him. So that tells you how old I am. But one thing that Andrew Gillum says especially is, if we can reduce the rates of heart disease, asthma, respiratory and even cancer, especially for children and seniors, he says we have the obligation to do something. And that’s how climate change and environmental injustice is impacting minority communities, children and our elderly, especially here in Escambia County.

NERMEEN SHAIKH: Well, Gloria, before we conclude, if you could just tell us: What would you like Governor Rick Scott to do now?

GLORIA HORNING: Move to another state. Sorry. Scott’s a day late. He’s way late on this. He can’t do anything. He needs to move on. He made this issue. He made this problem by denying climate change and then allowing chemical companies and the such pollute our waterways. You look at Lake Okeechobee and what it—allowing the sugar industry to dump all those pesticides into Lake Okeechobee, then go into our Gulf and Atlantic, and now all of that poison is now up into the Panhandle. And I really predict we’re going to have some sick folks out there, not just from the damage of the hurricane, but from the chemicals that they’re now going to be exposed to.

AMY GOODMAN: Gloria Horning, we want to thank you for being with us, social and environmental justice advocate, serves on the Environmental Advisory Board for Pensacola, Florida.

This is Democracy Now! When we come back, the astounding story of the owner of the limousine service in upstate New York, a limousine involved in one of the deadliest car crashes in many years in the United States. He was an FBI informant. Stay with us. 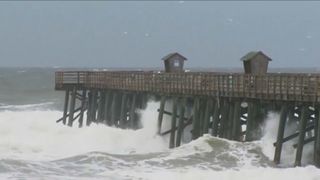