The Supreme Court has ruled it will allow the state of North Dakota to enforce a new voter ID requirement that will make it harder for Native Americans to vote during the midterm elections. The state’s new voter ID law requires voters to show identification demonstrating a residential street address, but this has already rendered many tribal IDs invalid, since many Native Americans who live on reservations depend on post office boxes to receive mail. The law could make a difference in the close race between Democratic Senator Heidi Heitkamp and her Republican challenger Kevin Cramer. The race is expected to help decide who controls the U.S. Senate. We speak with Ari Berman, senior writer at Mother Jones, reporting fellow at The Nation Institute and author of “Give Us the Ballot: The Modern Struggle for Voting Rights in America.” His latest piece is titled “Inside the Unlikely Movement That Could Restore Voting Rights to 1.4 Million Floridians.”

JUAN GONZÁLEZ: Ari, I’d like to move from Florida to another state that’s also a scene of disproportionate targeting of a racial minority. The Supreme Court has ruled it will allow the state of North Dakota to enforce a new voter ID requirement that will make it harder for Native Americans to vote during the midterm elections. The state’s new voter ID law requires voters to show identification that demonstrates a residential street address, but this has already rendered many tribal IDs invalid, since many Native Americans who live on reservations depend on post office boxes to receive their mail. The law could make a big difference in the close race between Democratic Senator Heidi Heitkamp and her Republican challenger Kevin Cramer. The race is expected to help decide who controls the Senate. Can you talk about that, as well?

ARI BERMAN: Yeah. So, the North Dakota voter ID law has flown under the radar relative to Georgia, but it’s just as serious, because the way this Republican voter ID law is written is that most tribal IDs are not going to be accepted because they do not have a residential address in them. Many Native Americans live in rural areas on reservations. They don’t have addresses. They get their mail at the post office. There’s nothing wrong with that, but this law was specifically written to not allow P.O. boxes count as an address.

And Heidi Heitkamp only won her first race for the Senate by 3,000 votes, with strong Native support. Now you’re talking about a much larger percentage of Native Americans who could be disenfranchised. So this one voter ID law in North Dakota could cost Heidi Heitkamp her Senate seat and could cost Democrats control of the Senate, so it’s a very, very serious situation.

We’re also talking about the most historically disenfranchised group in this country, who faces all sorts of barriers today. And now, 30 days before the election, they find out they might not be able to vote in a critical midterm election. It’s absolutely shocking and appalling, what’s happening in North Dakota.

AMY GOODMAN: You know, it’s also particularly interesting that this is happening at a time of Trump continually attacking Senator Elizabeth Warren, trying to use the word “Pocahontas,” the name Pocahontas as a pejorative to describe her. She has now gone and gotten a DNA test, which she says—from a Stanford professor—that says she has Native American lineage and ancestry, as she looks like she’s about to announce her bid for the 2020 presidential election.

ARI BERMAN: Well, just imagine, Amy, if voter suppression in North Dakota got a fraction of the attention of Elizabeth Warren’s DNA test or Donald Trump’s Pocahontas slurs. And I think what we should be focusing on instead of her ancestry is all the barriers that are being faced by Native Americans in this country. And you can go down every single statistic, and you see the problems. But particularly with voting, there is a long history of disenfranchising Native American voters, of making polling places very inaccessible, of gerrymandering districts so they don’t have representation. And now, right before an election, a new voter ID law is put into place that could disenfranchise thousands of Native voters.

To me, this is absolutely outrageous. It’s un-American. And the fact—if this election in North Dakota is tainted by voter suppression, you can’t reverse it. And so, right now, people have to do everything they can to get Native Americans so that they can get the IDs they need to vote. But this law was specifically written—it’s very, very clear—to disenfranchise Native American voters in North Dakota.

JUAN GONZÁLEZ: And, Ari, what are the—in terms of the fact that we’re only weeks away from the midterm elections, clearly, the Florida referendum, whatever happens there will only take effect for the next elections. But what can be done now in Georgia and in North Dakota to be able to have these folks have their right to vote before this election?

In North Dakota, the tribal authorities are going to have basically temporary IDs they’re going to give people, letters saying they have an address. Poll workers are supposed to accept that.

AMY GOODMAN: And ballot initiatives that have—that will ease restrictions in other parts of the country?

ARI BERMAN: Well, this is huge, because there’s ballot initiatives in seven states that would dramatically expand voting rights, from restoring voting rights to ex-felons in Florida, to making it easier to register to vote in Michigan and Nevada, to cracking down on gerrymandering in places like Colorado and Utah. And so, despite all the focus on voter suppression, there is an opportunity to dramatically expand voting rights in 2018, and there is the best opportunity in a decade to make it easier to vote for millions of people. So, I think that while all the focus is on suppression in 2018, the landscape for voting rights could look dramatically different in 2020 if all of these ballot initiatives pass, or even if some of them just pass in 2018.

AMY GOODMAN: Well, we want to thank you both for being with us, Ari Berman of Mother Jones—we’ll link to your pieces—and Desmond Meade of the Florida Rights Restoration Coalition. Desmond, I’ll see you on Saturday night in Melbourne, Florida, at the Gleason Performing Arts Center. We’ll be doing a public conversation about this groundbreaking amendment that has been proposed in Florida, Amendment 4.

When we come back, we continue our conversation with Carol Anderson, author of One Person, No Vote. Stay with us.

NEXTTrump Won in 2016 Thanks to Voter Suppression Says Carol Anderson, Author of “One Person, No Vote” 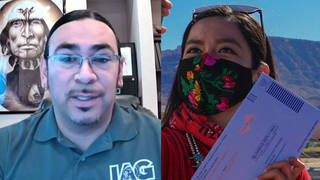 Native American Analyst: Our Voting Bloc Helped Flip Wisconsin Blue After It Voted for Trump in 2016