The UAE Hired Former U.S. Soldiers to Kill Leaders in Yemen. Is This the Future of War?

A new BuzzFeed News investigation has revealed that the United Arab Emirates hired U.S. mercenaries to carry out assassinations of Yemeni leaders it deemed “terrorists” in 2015. This included a local leader of al-Islah, a political party whose members include Nobel Peace Prize Laureate Tawakkul Karman. We speak with journalist Aram Roston, who broke the story. His piece is titled “A Middle East Monarchy Hired American Ex-Soldiers to Kill Its Political Enemies. This Could Be the Future of War.”

StoryMay 02, 2022Jan Egeland: We Need Negotiations, Not an Arms Race, to End War in Ukraine & Prevent a New Cold War

AMY GOODMAN: This is Democracy Now!, democracynow.org, The War and Peace Report. I’m Amy Goodman, as we continue to look at this shocking new investigation that reveals the United Arab Emirates hired U.S. special forces, mercenaries, to carry out assassinations of political and clerical leaders in Yemen. The former elite U.S. special operations fighters were paid to take part in missions to kill those deemed to be terrorists by the UAE. The United Arab Emirates worked with the U.S. company Spear Operations Group, founded by an Israeli-American man named Abraham Golan, who told BuzzFeed, “There was a targeted assassination program in Yemen. I was running it.” The group’s first target in Yemen was a local leader of al-Islah, a political party whose members include the Nobel Peace Prize Laureate Tawakkul Karman.

So, we go continue with Aram Roston of BuzzFeed News, who broke the story. Again, his piece called “American Mercenaries Were Hired to Assassinate Politicians in the Middle East.”

Can you explain more who Abraham Golan is, Aram?

ARAM ROSTON: His background is a bit murky. He was born in Hungary, he says, and it appears to be true. He seems to have been educated in France, spent a lot of time in France. He says he was in the French Foreign Legion. He obviously has very good contacts in Israel, says he was—lived in Israel for a while. He seems to have associated at one point with the former head of the Mossad, Danny Yatom. He’s a fascinating character. He clearly, according to the people I spoke to who knew him, former commandos, American commandos—he clearly knows what he’s doing in terms of combat and soldiering. He has military experience. And he’s the one who, with another person, set up this entire operation.

He met—this mercenary scheme was brokered by a man named Mohammed Dahlan, who I’m sure many people are familiar with. He’s a former Palestinian politician who’s exiled now. He was the head of security—he was the head of security first for the—in Gaza for a long time, and in the '90s he crushed Hamas very forcefully and was accused of human rights violations. In 2007, he was finally exiled. He was finally kicked out of Fatah, and he was kicked out of Palestine. And he settled in the UAE and is an adviser to the crown prince, who's functionally the ruler of the UAE. He, this Palestinian, Mohammed Dahlan, and Golan, together, as you’ll see in the story, they brokered this agreement.

AMY GOODMAN: What he said to you was quite stunning. Just to quote Golan, he said, “Maybe I’m a monster. Maybe I should be in jail. Maybe I’m a bad guy. But I’m right.”

ARAM ROSTON: He was saying, in part—the reason he was willing to talk to me, in part, is he seems to want the United States to have a targeted assassination program along the lines of the one that Israel not so secretly has. His argument—and, in fact, of course, the U.S. already does have some targeted assassination programs, right? The United States launches drone attacks frequently. And his argument is this is a better method of warfare, that targeted assassinations, if done properly and transparently, are a better—are less indiscriminate, say, than bombing, or are better than, say, you know, these signature strikes that the U.S. launches, where they simply bomb individuals when their conduct seems to the United States intelligence agencies to match that of a terrorist organizer. We’re all familiar with it with the signature strike program. And that’s his argument. I’m not saying whether it’s a credible argument, but it’s what he’s sort of—it’s what he’s sort of pitching. The U.S. has, as we know, toyed with assassination in the past.

AMY GOODMAN: And again, we have to talk about the fact that you’re talking about an investigation you did, the assassination of leaders in Yemen, that was under the Obama administration. He says—Abraham Golan—”I just want there to be a debate.” If you can talk about the actual assassination attempt that you detail in the piece of the al-Islah leader?

ARAM ROSTON: So, Anssaf Ali Mayo was the leader in Aden of al-Islah. He was not a hidden character. He was not viewed by the world as a terrorist. He was quoted in The Washington Post in a story about the effects of U.S. drones. And he objected to U.S. drone attacks in Yemen, saying that they turn the tribes against the United States. He was not—certainly publicly, not supporting al-Qaeda. He was quoted in the Financial Times. He was not a—in other words, he was, in many ways, a public figure. He, according to Mr. Golan, and Mr. Glimore, who I interviewed, as well, a former Navy SEAL, they were handed target cards by the UAE, by an intelligence officer for the UAE, while they were flying to Yemen the first time. And among those target cards, the most important was this man Anssaf Ali Mayo. So, they claim they formed this scheme to kill him.

They said he was in a—they believed he was in his office with a group of what they considered to be, what the UAE considered to be, terrorist targets. And they—as you can see, there’s a drone video we show which explicitly shows what’s happening. The mercenaries—because we have to call them mercenaries, they’re not security contractors—they drive up to the building. In the back is an actual UAE military vehicle. In the front is a UAE military vehicle. But these mercenaries are not in a military vehicle, they’re in a SUV. They drive up. They get out of their car with their guns drawn. One of them carries a bomb. It’s a shaped charge with shrapnel. He’s going to try to fix it to the door. You can see him walk up to the door. And another one opens fire. It’s unclear what he’s opening fire at. He’s shooting down the street, where there are people. They run away. Then the mercenaries start making their exit. They run to the UAE military vehicles to get away. One of the mercenaries has set this charge at the building. They all leave.

And then, suddenly, there’s an explosion as that bomb goes off, the one the military—the one the mercenaries dropped off at the—set at the door of this building. Then, after the mercenaries are gone, the car, the SUV they arrived in, that blows up. And that, we were told, is to sort of create confusion about who targeted al-Islah back in December 2015. It was December 29, 2015. It was supposed to spread confusion. And it did. Until now, nobody realized that it was Americans, American mercenaries, who bombed that building in an assassination attempt.

ARAM ROSTON: In the end, Anssaf Ali Mayo was not seen for some time. His social media presence subsided. Golan and Gilmore believed—they thought they had successfully killed him. In fact, he is back. He’s now recently met with the U.N. representative for Yemen. We saw—we showed a picture, that was in the newspaper, of him. He’s alive. What they did do is they did a lot of damage to the front of the building. But according to one person I spoke to who says he was in the building, a member of al-Islah, they didn’t kill people in the building. So it was a failed mission, in essence.

AMY GOODMAN: And finally, you’re talking about this all happening in the context of the U.S.-backed, Saudi-UAE-led coalition that is bombing Yemen into the worst humanitarian crisis in the world. More than a million people have cholera. The infrastructure of the country has been destroyed. Children are being killed every week. The U.N. is warning this is a complete catastrophe, Aram, as we wrap up.

ARAM ROSTON: Yeah. Yes, the U.S.—and we believe, in many ways, the U.S.—U.S. individuals and veterans are far more involved than we knew before.

AMY GOODMAN: Well, I want to thank you so much for being with us, Aram Roston, journalist with BuzzFeed News. We’ll link to your piece, “American Mercenaries Were Hired to Assassinate Politicians in the Middle East.”

To see Part 1 of our discussion, go to democracynow.org. I’m Amy Goodman. Thanks so much for joining us. 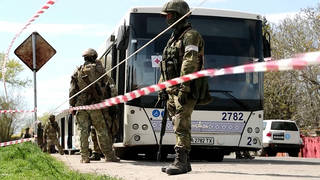