On November 7, 2018, a former marine opened fire at a country music bar in Thousand Oaks, California, killing 12 people, mostly college students. Police have identified the gunman as 28-year-old Ian David Long, a Marine veteran who had deployed to Afghanistan and had a history of mental health issues, including possible PTSD. The shooting has reignited a national discussion over mental healthcare for veterans returning from war. Earlier this year, Ian Long was evaluated by mental health professionals after police responded to a disturbance at his home, where he lived with his mother—and was cleared by the specialists. For more, we talk with Suzanne Gordon, whose new book probes the history of the Veterans Health Administration providing healthcare to U.S. veterans, generating medical innovations and healing the wounds of war.

Suzanne Gordon is still with us. Her new book, Wounds of War: How the VA Delivers Health, Healing, and Hope to the Nation’s Veterans.

Suzanne, we don’t know that much about Ian Long, but we know some things, like the police went to his house. He lives with his mother. His mother was afraid of him. Mental health professionals assessed him, but they didn’t do anything more than that at the time. He goes into this bar, that apparently he frequented, and he guns 12 people down.

Last week, at a yoga studio in Tallahassee, Florida, another young man, young white man, who is a military veteran, blows away two women—a 61-year-old doctor and a student at Florida State.

Can you talk about your response to this in looking at veterans coming home?

SUZANNE GORDON: So, I think we have to be very careful, Amy, not to label every veteran who comes home with a mental health problem as a danger to other people. We have had three instances this year. There was also the tragic murder and homicide and suicide of a veteran in Yountville, California, who killed three women who led the Pathway Home program.

AMY GOODMAN: You know, in the case of Ian Long, also it was revealed in the last few days that he had assaulted his track coach, a woman.

AMY GOODMAN: This is in high school.

AMY GOODMAN: She immediately brought it to authorities at the school, and they told her to hush this up, because they didn’t want to wreck his Marine future.

SUZANNE GORDON: Right, and that is unacceptable. And I think it behooves recruiters to really look into that, and it behooves people in high schools and in mental health to be very careful about those kinds of actions, because you really don’t want somebody like that to go into military service. But I think the real issue here is what the Veterans Health Administration does to help people, so that we don’t have—we don’t have those kinds of attacks. I mean, and also we again have to be very careful not to stigmatize every veteran who has a mental health condition, and look at them as a potential serial killer. I think most of the veterans who I’ve met really only hurt themselves.

And one of the really most important lessons I learned when I spent six years researching Wounds of War is how many veterans don’t get help. And that kind of socialization, not to get help when you have a mental health problem or substance abuse problem, begins in our broader society. It’s continued in the military. The military continually socializes people not to ask for help because they’re weak. Many people feel it will end their careers in the service. Then they get out of the service with many problems. Sometimes they don’t admit when they’re separating from the service that they have a problem, because if they admit they have a problem, they’re put on a medical hold, and it will delay their discharge. And then they come into the broader society, and there’s a lot of stigma against mental illness and getting help.

And I’ve been really impressed by the Veterans Health Administration. They have hundreds of videos of veterans begging other veterans to get help. They have peer support programs, where veterans who have had mental health or substance abuse problems—

AMY GOODMAN: Suzanne Gordon, we have the wrap up the show, but we want to ask you to stay with us, and we’ll post it online under web exclusives at democracynow.org. Suzanne Gordon’s new book is called Wounds of War.

And that does it for our show. Democracy Now! has internship job openings. Go to democracynow.org. 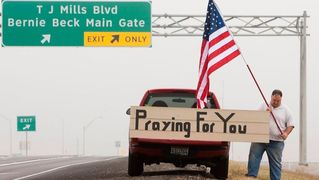