On the federal observance of Veterans Day, we take a closer look at the issue of veterans’ healthcare. On Sunday, Vice President Mike Pence wrote an article for Fox News touting Trump’s record on veterans’ health and the passage of a policy known as “Veterans Choice,” which is seen by veterans’ advocates as an attempt to drain the Veterans Health Administration of needed resources and eventually force privatization of the system. We’re joined by award-winning journalist and author Suzanne Gordon. Her new book is “Wounds of War: How the VA Delivers Health, Healing, and Hope to the Nation’s Veterans.” She recently wrote an article for The New York Times titled “By Protecting Veterans’ Health, You May Protect Your Own.”

StoryNov 12, 2018After Former Marine Kills 12 in Thousand Oaks, CA, a Discussion on Mental Health for Veterans

AMY GOODMAN: This is Democracy Now! I’m Amy Goodman, as we turn to this federal observance of Veterans Day, to the issue of veterans’ healthcare. On Sunday, Vice President Mike Pence wrote an article for Fox News titled “Veterans have no better friend than President Trump.” Pence touted Trump’s record on veterans’ health, writing, “President Trump has signed the most substantial veterans’ health-care reform in a generation, making Veterans Choice a permanent part of American law. Today our veterans have access to the real-time, world-class care they have earned, whether at a private health-care provider or the Department of Veterans Affairs. This law will also improve the VA’s ability to recruit and retain quality health-care professionals, give veterans access to walk-in care, and expand health-care choices, including options for telehealth and mental health services,” the vice president wrote. Critics of the law say it’s an attempt to drain the Veterans Health Administration of needed resources, eventually forcing the privatization of the system.

Meanwhile, the issue of veterans’ mental health was raised again last week after a former marine opened fire at a country music bar last week in Thousand Oaks, California, killing 12 people, mostly college students. Police have identified the gunman as 28-year-old Ian David Long, a Marine veteran who had deployed to Afghanistan and had a history of mental health issues, including possibly PTSD. Sam Tanner, who served in the U.S. Marine Corps with Ian Long, told The New York Times, quote, “I’m not surprised someone I knew ended up doing a mass shooting. We had another guy recently committed suicide by cops in Texas. Guys struggle. We’ve lost more marines in our peer group to suicide than we ever lost in Afghanistan,” he said. Earlier this year, Long was evaluated by mental health professionals after police responded to a disturbance at his home, where he lived with his mother, but he was cleared by the specialists. Clearly, his neighbors said, his mother was afraid of him.

For more, we’re joined by award-winning journalist and author Suzanne Gordon. Her new book, Wounds of War: How the VA Delivers Health, Healing, and Hope to the Nation’s Veterans. She recently wrote an article for The New York Times headlined “By Protecting Veterans’ Health, You May Protect Your Own.”

AMY GOODMAN: You wrote this piece, “By Protecting Veterans’ Health, You May Protect Your Own.” Explain.

SUZANNE GORDON: Well, the Veterans Health Administration doesn’t just care for veterans and give innovative, state-of-the-art care to the nation’s military veterans. It also conducts research—the shingles vaccine, the nicotine patch, the first liver transplant—that helps all Americans. I thank the VA for my shingles vaccine, for example. It also teaches about 70 percent of American physicians in training. It teaches nurses, psychologists, social workers. And it develops models of clinical care that really help us all. I mean, I’ve never seen teamwork practiced so thoroughly as I have in VA hospitals, and I’ve been covering private-sector healthcare for almost 35 years. The end-of-life care and palliative care it gives to patients with cancer and other of diseases that will end up in their deaths is really amazing. The VA practically invented the field of geriatrics. I mean, I live in Northern California, and Kaiser, which is a system that is very close to the VA but nowhere near as good as it, in my view, has a handful of, if any, geriatricians to deal with an aging population.

So, the VA continues to innovate. I mean, right now they’re doing a Million Veteran Program in order to look at the impact of genes on health. They’re developing ways of dealing with demented patients that are angry and aggressive and unable to be transferred to nursing homes. I watched one program where a World War II veteran was terrified when they opened the window shade, because he thought—speaking of the armistice—he thought that the Nazis were coming in the window. And they taught the nurses and the aides how to deal with this veteran without using any kind of restraints and were able finally to get him into a nursing home. And they had calmed him down so much that when I walked in the room one day, after seeing him the other day in a very agitated state, he came up to me, and he asked me how I was, and kissed my hand.

AMY GOODMAN: Can you talk about Pence’s statement about President Trump signing the most substantial veterans’ healthcare reform in a generation, making Veterans Choice a permanent part of American law. What is this about?

SUZANNE GORDON: So, this is—he’s referring to the VA Mission Act of 2018, which was passed in June. Sadly, too many Democrats also voted for this act. This act definitely is a big change. And what it will do is not make veterans healthier or really help them to deal with the many different wounds of war and of military service that they suffer from. It’s going to starve the VA of resources. I mean, it allows many more veterans to go into private-sector hospitals and doctors and mental health providers and so forth, who various studies show are not familiar with their many very specific problems. Every dollar that is paid to the private sector will come out of the VHA budget, the Veterans Health Administration budget. So, pretty soon what we’ll see is there will be more money going to private-sector doctors and hospitals, that are not equipped to take care of veterans’ problems, and money will be taken right out of the VHA budget.

And this is the veteran—it’s called the VA Mission Act, and I think it’s all about killing the mission of the VA, which is to give high-quality care to the kind of veterans that come back from war with serious problems, like Adam Hochschild described in the earlier segment, and the kind of mental health and pain problems and other problems that so many veterans suffer from.

AMY GOODMAN: Suzanne Gordon, we’re going to just break for 30 seconds, then come back. And I want to ask you about Ian Long, the alleged shooter in the Thousand Oaks case who gunned down 12 people, mainly college kids.

AMY GOODMAN: He’s a Marine Corps vet. Stay with us.

AMY GOODMAN: That’s Yo-Yo Ma performing Bach’s Suite No. 5 for Cello in C Minor at Sunday’s ceremony in Paris marking a hundred years since the armistice that ended World War I. 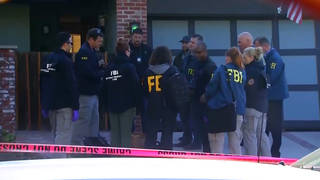