After the Valentine’s Day Massacre, Student Survivors Lead the Way Nikolas Cruz knew how to handle a gun, thanks to the National Rifle Association and the U.S. Army. The accused perpetrator of the Valentine’s Day massacre at Marjory Stoneman Douglas High School in Parkland, Florida, gunned down 17 people in three minutes, all with a semi-automatic AR-15. Cruz attended the high school but was moved to other schools because of his violent behavior. He was arrested wearing his high school JROTC shirt — the Junior Reserve Officers’ Training Corps. Cruz was a member of Army JROTC while at the high school, as well as the school’s four-member varsity rifle club, which was supported by a grant from the National Rifle Association Foundation. The Pentagon is in our public schools, recruiting students to the military. At its side is the NRA, putting guns into the hands of children.

In Florida, 18 is the legal minimum age for purchasing a semi-automatic rifle. Nikolas Cruz was 19, and legally owned the gun he is accused of using during that terrible massacre. Through his social media posts and accounts from people who know him, he had a deep love of guns and other weapons. “He was a very good shot,” former rifle teammate Aaron Diener told The Associated Press.

Pat Elder is the director of the National Coalition to Protect Student Privacy, an organization that confronts militarism in schools, and the author of the book “Military Recruiting in the United States.” “We have the United States Army and the other three branches in the high schools putting lethal weapons into the hands of 13- and 14-year-olds,” Elder told us on the “Democracy Now!” news hour. “It’s time this stops. The program has more than 575,000 children in all states.”

Elder has been opposing U.S. militarism since he was a teenager, protesting the U.S. bombing of Cambodia in the early 1970s. He calls the presence of the U.S. military in our public school system pervasive and insidious, starting with Lego building competitions in third grade. In high schools, they replace the Legos with guns, Elder told us: “The JROTC program is a military recruitment program that has more than 3,000 schools. Of those, more than 1,600 schools participate in marksmanship programs across the country. So we have firing ranges in high schools in every state. They fire .177 caliber rifles … it’s a lethal weapon, categorized by the Army.”

The NRA, through its “charitable” foundation, donates funds or weapons to schools to put guns into the hands of children, boasting on its website, “Since our establishment in 1990, we’ve awarded nearly $335 million in grant funding.” The NRA admits, and Pat Elder confirms, that most of their grants are in the form of “program supplies or equipment,” that is, guns and ammunition. The Marjory Stoneman Douglas High School marksmanship program tweeted 17 months ago, “JROTC Marksmanship team would like to thank the NRA for their grateful donation of nearly $10,000 to upgrade and replenish equipment!”

Marjory Stoneman Douglas, the school’s namesake, was an activist and writer who died in 1998 at the age of 108. She was a suffragist and environmentalist. Known as the “grand dame of the Everglades” for her leadership protecting the vast wetlands, she took on entrenched business and land development interests. It is deeply moving that the teenagers who endured the horrific mass shooting are emerging as some of the most impassioned, eloquent and effective activists. They are taking on one of the most entrenched interest groups in the country, the gun lobby.

Days after the massacre, at a gun control rally in Fort Lauderdale, Stoneman Douglas senior Emma Gonzalez addressed the crowd. Her comments went viral: “If all our government and president can do is send thoughts and prayers, then it’s time for victims to be the change that we need to see. … If the president wants to come up to me and tell me to my face that it was a terrible tragedy and how it should never have happened, and maintains telling us how nothing is going to be done about it, I’m going to happily ask him how much money he received from the National Rifle Association … I already know: $30 million!”

On Tuesday, over 100 Stoneman Douglas students traveled to the Florida state capitol to demand a statewide ban on automatic weapons. As they arrived, the legislators resoundingly voted to block a debate on a ban. Undeterred, the students are on the move. They are organizing a march on the nation’s capital and in cities around the country, on March 24. They are calling it the March for Our Lives.

StoryAug 06, 2019Parents of Parkland Victim Planned to Unveil a Mural in El Paso. Then Another Mass Shooting Happened 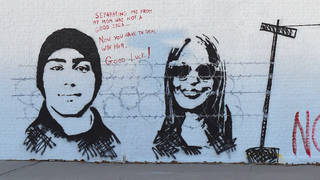 Parents of Parkland Victim Planned to Unveil a Mural in El Paso. Then Another Mass Shooting Happened