Former CIA officer and whistleblower John Kiriakou personally knew CIA director nominee Gina Haspel when he worked at the CIA. But their careers have taken very different paths over the past decade. Haspel, who was directly involved in torture at a secret CIA prison in Thailand, has been promoted to head the agency. Kiriakou, who blew the whistle on the torture program, ended up being jailed for 23 months. For more, we speak with John Kiriakou, who spent 14 years at the CIA as an analyst and case officer.

StoryMar 14, 2018Jeremy Scahill: Gina Haspel Should Be Answering for Her Torture Crimes, Not Heading the CIA

AMY GOODMAN: As we continue to talk about the latest shake-up in the Trump administration, let’s bring into this conversation former CIA officer John Kiriakou, who personally knew CIA director nominee Gina Haspel when he worked at the CIA. But their careers have taken very different paths over the past decade. Haspel, who was directly involved in torture at a secret CIA prison in Thailand, has been promoted to now head the agency. Kiriakou, who blew the whistle on the torture program, ended up being jailed for almost two years.

John Kiriakou, welcome back to Democracy Now! Can you respond to President Trump’s decision to fire Rex Tillerson and replace Tillerson with Pompeo as secretary of state? Pompeo, head of the CIA, would be then replaced by the deputy director of the CIA, Gina Haspel.

JOHN KIRIAKOU: Well, so many of us believed a year ago that Rex Tillerson was going to be the adult in the room at the White House. That turned out to be the case, in a way, but he was so disrespected by this president and those around him that he was probably doomed from the beginning.

On Mike Pompeo, I’ve said from the beginning, you can disagree with him politically and ideologically, but he doesn’t have the kind of baggage that Gina Haspel has. I wouldn’t have chosen Mike Pompeo to be the secretary of state, but, I guess, in the greater scheme of things, we could have done worse.

Gina Haspel, however, is a problem, a big problem. I’ve been talking about Gina Haspel for more than a year. She was a dreadful choice to be the deputy director. She’s a worse choice to be the director. I think it’s wonderful that there’s a possibility of a woman heading the CIA, but there are 50 different women who are qualified to lead the CIA. It shouldn’t be Gina Haspel.

AMY GOODMAN: So talk about why you and others called her “Bloody Gina.”

JOHN KIRIAKOU: We did call her Bloody Gina. Gina was always very quick and very willing to use force. You know, there was a group of officers in the CIA’s Counterterrorism Center, when I was—when I was serving there, who—I hate to even make the accusation out loud, but I’m going to say it: who enjoyed using force. Yeah, everybody knew that torture didn’t work. That’s not even the issue. Lots of different things work. Was it moral, and was it ethical, and was it legal? I think the answers to those questions are very clearly no. But Gina and people like Gina did it, I think, because they enjoyed doing it. They tortured just for the sake of torture, not for the sake of gathering information.

AMY GOODMAN: And can you talk more specifically about Gina Haspel heading up this secret CIA black site in Thailand and—for those who aren’t familiar with even what a black site is—and the fact that she not only headed it up, but was directly involved with the torture?

JOHN KIRIAKOU: First, let me preface any comments that I make by saying that the CIA’s Publications Review Board is specifically prohibiting me from talking about Gina Haspel’s résumé, especially her overseas duty. With that said, the media has reported extensively on what Gina Haspel has done over the course of her career, so I’ll leave it at that.

With that said, a black site is a site that’s more or less off the books, meaning it doesn’t officially exist. It exists, but nobody is supposed to know that it exists. And in many cases, that includes the congressional oversight committees. So, in the immediate aftermath of 9/11, the CIA set up such black sites all around the world, with the idea being that if we captured someone from al-Qaeda or kidnapped someone from al-Qaeda, we could send him to one of these black sites, interrogate him without having to worry about the law, about ethics or morality or the FBI breathing down their backs. They could do whatever they wanted. And that’s how this torture program spiraled out of control. There were people who were murdered in the course of their interrogations.

Jeremy Scahill: Gina Haspel Should Be Answering for Her Torture Crimes, Not Heading the CIA

NEXTJeremy Scahill: Gina Haspel Should Be Answering for Her Torture Crimes, Not Heading the CIA 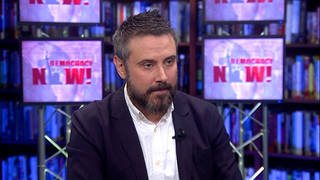 Jeremy Scahill: Gina Haspel Should Be Answering for Her Torture Crimes, Not Heading the CIA