Overlooked: How Women Like Diane Arbus & Ida B. Wells Were Omitted from The NYT Obituaries

As the world marked International Women’s Day on Wednesday, The New York Times began a new project highlighting the lives of remarkable women who never had an obituary in the paper, until now. The list might surprise you. It includes the pioneering anti-lynching journalist Ida B. Wells; the writer and poet Sylvia Plath; Qiu Jin, who was known as China’s Joan of Arc; the groundbreaking photographer Diane Arbus; the woman who helped engineer the Brooklyn Bridge, Emily Warren Roebling; Charlotte Brontë, who wrote “Jane Eyre”; Henrietta Lacks, whose cells led to a medical revolution; and Ada Lovelace, who is considered to be the world’s first computer programmer. The New York Times is calling the project “Overlooked,” and it is part of an effort to make up for the paper’s 167-year history of focusing largely on men—mostly white men—in the obituary pages. For more, we speak with Amy Padnani, digital editor of obituaries at The New York Times, who came up with the idea of “Overlooked.”

AMY GOODMAN: This is Democracy Now! I’m Amy Goodman. As the world marked International Women’s Day Wednesday, The New York Times began a new project highlighting the lives of remarkable women who never had an obituary in the paper, until now. The list might surprise you. It includes the pioneering anti-lynching journalist Ida B. Wells; the writer, the poet Sylvia Plath; Qiu Jin, who was known as China’s Joan of Arc; the groundbreaking photographer Diane Arbus; the woman who helped engineer the Brooklyn Bridge, Emily Warren Roebling; Charlotte Brontë, who wrote Jane Eyre; Henrietta Lacks, whose cells led to a medical revolution; Ada Lovelace, who is considered to be the world’s first computer programmer. None of their obituaries appeared in the Times. The New York Times is calling their new project “Overlooked.” It’s part of an effort to make up for the paper’s 167-year history of focusing largely on men—overwhelmingly on white men—in the obituary pages.

We’re joined now by Amy Padnani, digital editor of obituaries at The New York Times, who came up with this idea.

Well, the good news, when I read The New York Times obituaries over the years, when I’ve read them, is that it just seemed like women and people of color rarely died.

AMY PADNANI: This was some feedback we frequently got from our readers: “Why don’t we see more women and minorities in your pages?” And that was something that bothered me personally. I just joined obituaries in early 2017. And as you know, the national debate on race was heating up, and the conversation about gender inequality was starting to take hold again. And it really got me thinking, as a woman of color and as an editor at The New York Times, “What can I do to advance this conversation?” All of these people were coming out of the shadows to tell stories of injustices, and it really resonated with me.

So, I came across, in my day-to-day research, a woman who had been credited with bringing tennis to the United States from Bermuda. Her name is Mary Outerbridge. She started the first tennis court on Staten Island, of all places. And I used to live on Staten Island. It’s a place that’s near and dear to my heart. And I thought, “What a neat nugget about history!” So, I checked to see if we had done an obituary on Mary Outerbridge, and we hadn’t. So, I kind of tucked that away in the back of my mind. And through my research, I started coming across more and more names like this. We, as you noted, came across some really surprising ones, like Diane Arbus and Sylvia Plath.

AMY GOODMAN: So let’s talk about who they are.

AMY PADNANI: Sure, the brilliant photographer Diane Arbus. She was known for photographing people kind of on the outskirts of society, sideshow people, dwarfs. Some wondered if she did it for attention, in a way, but others really thought the photos were remarkable and artistic. And she had a lot of fame in her own lifetime, so we were surprised when there was no obituary about her death.

AMY GOODMAN: And Ida B. Wells.

AMY PADNANI: Same, yeah. She was—as you noted, she was a pioneer in the anti-lynching movement and a journalist who was one of the first to produce a newspaper by a black person for black people. And in her lifetime, she also was extremely famous. We even had a little front-page blurb about her marriage, but we didn’t have anything about her death.

AMY GOODMAN: I want to go to my colleague Juan González, who wrote about Ida B. Wells in his book News for All the People: The Epic Story of Race in the American Media. He talked about her on our show when his book came out.

JUAN GONZÁLEZ: Ida B. Wells was one of the early muckrakers, that is not known as a muckraker in the official histories. But in the late 19th century, she was the editor of a paper in Memphis, and three of her friends were lynched by a mob. And she began a crusade against that lynching. And her newspaper was burned down while she was out of town. And she then went across the country, exposing the epidemic of lynching in America of African Americans, and became a really crusading, the first crusading journalist on this issue. And she’s known, again, in the histories of the black press, as one of the giants of the press, but is, again, rarely mentioned or talked about in official histories of the press in America. But she was a key figure, and not only was involved with the NAACP later on, met with presidents over issues of racial discrimination, was a major figure in the late 19th century and early 20th century.

AMY GOODMAN: But her obituary didn’t make it into the Times. What about Sylvia Plath? Tell us who she is.

AMY PADNANI: Sylvia Plath, the famous poet who wrote The Bell Jar, she also was extremely famous in her lifetime. She committed suicide at a fairly young age. And we also—

AMY PADNANI: That’s right. And we were also really surprised to learn that there was nothing. We had stories about her writing, but we didn’t have an obituary covering her death.

SYLVIA PLATH: You do not do, you do not do
Any more, black shoe
In which I have lived like a foot
For thirty years, poor and white,
Barely daring to breathe or Achoo.

Daddy, I have had to kill you.
You died before I had time—
Marble-heavy, a bag full of God,
Ghastly statue with one gray toe
Big as a Frisco seal

And a head in the freakish Atlantic
Where it pours bean green over blue
In the waters off beautiful Nauset.
I used to pray to recover you.
Ach, du.

AMY GOODMAN: And I want to turn to that documentary, Going Where I’ve Never Been: The Photography of Diane Arbus. In this clip, we hear Arbus’s friend Mary Claire Costello reading Arbus’s musings on photography. Diane Arbus also committed suicide, is that right?

MARY CLAIRE COSTELLO: “If I were just curious, it would be very hard to say to someone, 'I want to come to your house and have you talk to me and tell me the story of your life.' I mean people are going to say, ’You’re crazy.’ Plus they’re going to keep mighty guarded. But the camera is a kind of license. And for a lot of people, they want to be paid that much attention and that’s a reasonable kind of attention to be paid.”

AMY GOODMAN: And that was reading the words of Diane Arbus. Nella Larsen, Amy?

AMY PADNANI: So, Nella Larsen was a literary star during the Harlem Renaissance in the 1920s and 1930s. She wrote a couple of books, that are still discussed in classrooms today, addressing issues of race and pressures that middle-class black families would feel. And when—so, she was accused of plagiarism later on in her life, and she eventually withdrew from the limelight. She died alone in her apartment, and her body was found days later. So she kind of died in obscurity.

AMY GOODMAN: Explain this—I’ve got the section that’s coming out on Sunday. The New York Times, the front page, it’s almost white, but it’s got the photographs leaching through from the inside, of these 15 women, to the outside.

AMY PADNANI: This was a concept we came up with. We wanted it to have that feeling of: These women are no longer overlooked. They’re now coming out of the woodworks. They’re coming out of the shadows, and we’re finally giving them their due.

AMY GOODMAN: What percentage of people in the obituaries are still white men?

AMY PADNANI: About four out of five obits are on white men—are on men.

AMY GOODMAN: What are they?

AMY PADNANI: Sorry, on men. I don’t have the figures for people of color. So, yeah, about 80 percent of our obituaries are about men.

AMY GOODMAN: So, how will this affect the obituaries, going forward?

AMY PADNANI: Well, I’m really hoping that it will help raise awareness and continue the conversation. We also recently hired our very first gender editor, Jessica Bennett, and we have a race-related team. And their goals are to infuse the entire newsroom with a different way of thinking. So, they’re not relegated to this one corner of the newspaper. They’re everywhere. And they’re really tasked with changing the tone, the white male tone of media and of The New York Times, and bringing new perspectives. So, I’m very hopeful that will help with our initiative, too.

AMY GOODMAN: Well, Amy Padnani, I want to thank you so much for being with us, for coming up with this very important idea. We’ll see if filling in the gaps of the past makes the difference in the present and the future. But we’re going to link to this remarkable special section at democracynow.org. It’s called “Overlooked.” 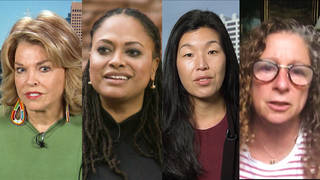