Prince Harry and Meghan Markle were married Saturday at Windsor Castle in a ceremony that many heralded for celebrating black culture and history. Markle is biracial, divorced and a self-proclaimed feminist. The wedding featured a sermon about slavery, poverty and the enduring power of love by Bishop Michael Curry, the first African American to preside over the Episcopal Church. The British royal family is a “celebration of wealth, of elitism, of privilege in the hands of the few, of all the resources concentrated in the hands of a very small percentage of the country. In that sense it very much represents the current economic order in which we all live,” says Priya Gopal, a university lecturer in the Faculty of English at the University of Cambridge.

JUAN GONZÁLEZ: We now turn to Britain, where Prince Harry and Meghan Markle were married Saturday at Windsor Castle in a ceremony that many heralded for celebrating black culture and history.

JUAN GONZÁLEZ: That’s the Kingdom Choir, a British Christian gospel group, singing civil rights anthem “Stand By Me” by Ben E. King. The rousing sound was one of a series of performances by black artists at the wedding, which welcomed Meghan Markle to the royal family. Markle is biracial, divorced and a self-proclaimed feminist. She walked herself down the aisle on Saturday during the tradition-busting ceremony that led many to claim the wedding ushered in a new era for the royal family.

AMY GOODMAN: Bishop Michael Curry, the first African American to preside over the Episcopal Church, also delivered a sermon about slavery, poverty and the enduring power of love.

BISHOP MICHAEL CURRY: The late Dr. Martin Luther King once said—and I quote—”We must discover the power of love, the redemptive power of love. And when we do that, we will make of this old world a new world, for love—love is the only way.” There’s power in love. Don’t underestimate it. Don’t even oversentimentalize it. There’s power, power in love. If you don’t believe me, think about a time when you first fell in love. The whole world seemed to center around you and your beloved.

AMY GOODMAN: That’s Bishop Michael Curry, the first African-American bishop to preside over the Episcopal Church in the United States.

For more, we’re joined in Cambridge, England, by Priya Gopal, a university lecturer in the Faculty of English at the University of Cambridge. Here in New York City, we welcome Gabrielle Bruney, an editor for Esquire, her recent article headlined “The Royal Wedding Celebrated the Contributions of Black Britons: But it comes amid a scandal rooted in the British government’s mistreatment of Caribbean people.”

We welcome you both to Democracy Now! We’re going to begin in England where the royal wedding was, Priya Gopal. You know, it was described as a tradition-busting ceremony, but many say the traditions weren’t busted enough, that the monarchy should be abolished. If you can—you live-tweeted the whole thing. Can you talk about your feelings about what happened this Saturday? What, a quarter of Britain watched?

PRIYA GOPAL: Tradition-busting is probably a bit of a stretch. I think that there were important symbolic, iconographic changes. The royal family is a deeply white institution, rooted in Britain’s history of imperialism and empire. It’s a deeply patriarchal institution. And given that history, to have a strong black presence in the church, to hear a gospel choir, to hear a black bishop give an address, these were all changes that are, I think, symbolic, and they make some difference.

I think it’s a stretch to call them tradition-busting. It was still an extremely—it is still an extremely white institution. The ceremony remains patriarchal. Ms. Markle walked down the aisle by herself, because her father was unable to make it, and then she was taken to the alter by Prince Charles. So I think we need to acknowledge that there were certain important changes, but to call them tradition-busting, I think, is a stretch. The monarchy remains a deeply reactionary, patriarchal and, frankly, white institution.

AMY GOODMAN: So, can you talk—go ahead.

JUAN GONZÁLEZ: And, Priya, why do you think that so many Britons still cling to this total anachronism of a monarchy nowadays? Why do they feel so invested in the royal family?

PRIYA GOPAL: I think there are two things to say there. One is that the royal family is deeply entrenched in Britain’s mythology about itself. There is a huge investment in pomp and circumstance. Throughout the wedding, the commentary on the media spoke about how no other country does tradition, does pomp, does circumstance as well as Britain does. And, of course, the monarchy is the epitome of pomp and circumstance. And I think that that’s very deeply rooted in the mainstream Britain sense of itself as more traditional and more elegant than everybody else.

But I also think it’s slightly a mistake to call the monarchy an anachronism. I think that it seems like an anachronism, but in fact its name for itself is “the firm,” which really tells us how much the monarchy is actually very rooted in corporate capitalist culture, how well it has kept up with that. And the monarchy in Britain is a celebration of wealth, of elitism, of privilege in the hands of a few, of all the resources concentrated in the hands of a very small percentage of the country. And in that sense, it very much represents the current economic order in which we all live. And there’s nothing anachronistic about the fact that the 1 percent have much more than the rest of us do.

AMY GOODMAN: The wedding itself cost something like $45 million. Can you talk about the finances of the royal family, how they are supported?

PRIYA GOPAL: Right. So, in British terms, the wedding cost an overall £32 million. That’s about the sum that you just mentioned in dollars. Only £2 million of that £32 million was actually spent by the royal family’s so-called private finances. I mean, this is money that they have accrued over decades, over centuries, and that has gone into private hands. But actually £30 million of that £32 million was borne by the taxpayer. And that is a shocking figure at a time when there have been swingeing cuts to public services, when the number of homeless on Britain streets has been increasing. These were homeless people who were cleared off the streets of Windsor for the royal wedding.

And I think, again, this is a shocking example of how much money, how much public money, how much rare public money, goes into funding this family. And it’s done in the name of—it’s done on the basis that this family brings in a lot of money to the country because of tourist dollars and so on and so forth. But I think that really what it is an example of is how much the public purse subsidizes private privilege. £30 million went into policing and into security—at least that’s what we’re told—and it seems to me an unconscionable figure at a time when so many people are suffering from cuts to public services.

JUAN GONZÁLEZ: And could you comment also about this merger of celebrity with the class elite? Obviously, the promotional value that having an Oprah or a George Clooney or a David Beckham at this private wedding has in terms of marketing this whole affair?

PRIYA GOPAL: Yes. I mean, it’s very much part of a constant rebranding that the royal family does. And it goes back to what I was saying about not merely looking at the institution as an anachronism. It is a firm. It is a corporate firm. It relies on corporate strategies. PR is very central to its survival and to its flourishing.

In fact, someone connected to the court said at some point that Meghan Markle is a PR department’s dream. And she absolutely is. Like any company, it has to be seen to be keeping up with society. It has to be seen to be being more multicultural than it has been, to be bringing women in, to be giving women more of a role. So, in that sense, we need to look at the kind of merger between the royal family and Hollywood, between the feudal institution of monarchy and the corporate institutions of public relations, as precisely what you would expect any functioning corporate firm to do: to be keeping an eye on PR, to be making sure that it satisfies its customer base and that it is seen to be, quote-unquote, “modern.”

AMY GOODMAN: Is it true, Priya Gopal, that the queen and Prince Charles have had the power of veto, vetoing legislation? The queen delivering a pro-austerity speech with her £1,000,000 hat? I think one comic headline from U.K. HuffPost said, “Woman in £1,000,000 Hat Tells Britain to 'Live Within Its Means,'” referring to her crown.

PRIYA GOPAL: Well, I think that, constitutionally, the queen does have that power, but it is not ever really exercised. And so, what we have here is a constitutional figurehead who does what the government of the day tells her to. Now, the mythology around the royal family also holds that they’re not allowed to be political, and by which is meant that they’re not actually allowed to intervene in political decisions made by the government of the day.

I also understand that the queen does have the power to veto legislation. I’ve never known of its being used. Perhaps it has been; I’m not enough of a constitutional scholar to know. But again, here is a bit of a mythology. We have a monarchy, which actually shores up the political and economic order of the day. It is a deeply political institution. But the nation and the world is invited to buy into the mythology that there is nothing political about people who wear, as you just said, £1,000,000 hats and represent the bidding of the government of the day. They do—they are a very political institution, but everything here relies on the mythology that they’re not political. 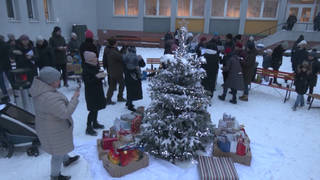