In Yemen, a coalition led by Saudi Arabia and the United Arab Emirates has launched an all-out offensive against the key port city of Hodeidah. The offensive is expected to be the biggest battle in the ongoing 3-year war between the U.S.-backed, Saudi-led coalition and Houthi rebels. The war has already killed 15,000 civilians, sparked the world’s worst cholera epidemic and pushed the country to the brink of famine. Humanitarian organizations have warned the offensive could be a catastrophe for a quarter of a million civilians living in the port city, and for the rest of the Yemen, which is highly dependent on aid that travels through this port. For more, we speak with Congressmember Ro Khanna in Washington, D.C. He recently co-authored a bipartisan letter calling for Defense Secretary James Mattis to help prevent an attack on Hodeidah.

AMY GOODMAN: We begin today’s show in Yemen, where a coalition led by Saudi Arabia and the United Arab Emirates has launched an all-out offensive against the key port city of Hodeidah. The offensive is expected to be the biggest battle in the ongoing 3-year war between the U.S.-backed, Saudi-led coalition and Houthi rebels. The war has already killed 15,000 civilians, sparked the world’s worst cholera epidemic and pushed the country to the brink of famine. Humanitarian groups have warned the offensive could be a catastrophe for a quarter of a million civilians living in Hodeidah, and for the rest of the Yemen, which is highly dependent on aid that travels through the port. The World Health Organization estimates 8.4 million people in Yemen already face pre-famine conditions. The offensive comes just days after the U.S.-backed, Saudi-led coalition bombed a new Doctors Without Borders cholera clinic in Yemen’s northwest Abs region.

On Tuesday, I spoke with Democratic Congressmember Ro Khanna. He represents Silicon Valley in California. He recently co-authored a bipartisan letter calling for Defense Secretary James Mattis to help prevent an attack on Hodeidah. I asked Congressman Khanna to lay out his concerns.

REP. RO KHANNA: It would just be a catastrophe of civilian casualties. An attack on Hodeidah would mean thousands and thousands of women and children and civilians would die. Second, the port of Hodeidah is the only place right now, for practical purposes, that food and medicine can get into Yemeni civilians. So, this is—one would think it just should be common sense that the United States and the international community would be doing everything in our power to keep that port open. In the past, even Ambassador Nikki Haley has talked about the importance of that port for civilians. And it would be really a dereliction of our own values to not do everything in our power to stop that attack, and do everything in our power to stop refueling the Saudis from their bombing campaign in Yemen.

AMY GOODMAN: What do you know about this Doctors Without Borders cholera clinic that the Saudi regime just bombed? They said they gave their coordinates to the Saudis. We have heard this so many times before in other places, for example, in Afghanistan.

REP. RO KHANNA: Well, it’s really shocking and unconscionable. And this is not the only incident. We’ve had reports over the last year, year and a half, about the Saudis indiscriminately bombing civilian sites, bombing relief workers. And that’s not something that the United States should in any way participate in. Our refueling of the Saudi planes is something the Saudis desperately rely on. We started doing that as a sop to Saudi Arabia when we did the Iran deal. We thought, “OK, we’re going to do this Iran, and the Saudis are insistent on this. So, let’s provide some assistance.” It was a mistake. I don’t think anyone would have anticipated the level of humanitarian catastrophe in Yemen.

It’s important to understand that this is not a counterterrorism operation in Yemen against al-Qaeda. This is an active interference in the Saudi effort to bomb the Houthis and engage in a civil war. So the United States needs to stop our role in furthering the Saudi effort. And we certainly need to do everything in our power to stop the Saudis from attacking the port of Hodeidah.

AMY GOODMAN: Congressman Khanna, The Wall Street Journal is reporting the Trump administration is weighing a request by the United Arab Emirates to expand the U.S. role in the war in Yemen by providing direct assistance to the impending offensive against the port city of Hodeidah. So you’re talking about, oh, Saudi Arabia, United Arab Emirates. These are the countries also that particularly Jared Kushner, President Trump’s son-in-law, senior adviser to President Trump, is very close to. What does this direct assistance mean? And how is this happening without congressional approval?

REP. RO KHANNA: Well, there’s been, candidly, a lack of transparency by the Trump administration. In the past, when Secretary Mattis has testified to the Armed Services Committee, on which I sit, he has been very clear that our efforts in Yemen are largely limited to counterterrorism operations against al-Qaeda and that he has said that the United States does not have an active role in assisting the Saudis in their fight against the Houthis. But then we are hearing reports that that is not true and that they’re considering expanding our aid to the Saudis, not because of counterterrorism interests, but really because of the civil war, which is a proxy war with Iran. And so, that is what prompted several of us to write Secretary Mattis a letter.

At the very least, we need transparency from the administration about our objectives in Yemen. They are relying on the 2001 AUMF, authorization of force, which allows us to go after al-Qaeda or its affiliates anywhere in the world. That was overly broad, but even under that authorization of force, there is no authority to go after the Houthis. And the administration just needs to be far more transparent. And we’re going to demand transparent answers from Secretary Mattis and others.

REP. RO KHANNA: Well, we see them both as allies, candidly, to contain Iran. And this type of balance-of-power politics has gotten us into a lot of problems in the Middle East. And, unfortunately, we’re continuing the same type of thinking, saying that we need to ally with countries that may be a check on Iranian expansion. Unfortunately, the administration has continued down that path of thinking, without any authority from the United States Congress. But the first step is to really understand what our involvement and role is in Yemen. The administration has been very coy about admitting that we’re actually aiding the Saudis in a proxy civil war, aiding the United Arab Emirates in a proxy war in Yemen against Iran, because they know that has absolutely no authorization under congressional—by Congress.

AMY GOODMAN: And talk more about this, for people who are not familiar with the U.S. role, why the U.S. is at all involved in this on the side of Saudi Arabia. Under Obama, for a period, they were directly assisting. Then, as you pointed out, they put some limitations on that assistance. If you could explain what that was and what caused that, and then how Trump himself is responding? Do you think he has any understanding of what’s happening in Yemen, with—I mean, not even to mention the deaths, something like 15,000, but talking about just people afflicted with cholera, the worst situation in the world? Over a million Yemenis are suffering from cholera. The Doctors Without Borders clinic was a cholera clinic.

REP. RO KHANNA: Well, you’re right to point out the humanitarian catastrophe. I mean, this is the single worst humanitarian crisis in the world. And, unfortunately, in this case, unlike in Rwanda in the past or in Bosnia, the United States has had a role, because we initially provided aid to the Saudis, and we continue to refuel their planes.

The reason for our aid to the Saudis was as a balance to our supporting Iran with the Iran deal. We were negotiating with Iran to have the Iran deal. The Saudis complained to the Obama administration at the time, saying, “We feel insecure with the normalization of the relationship with Iran.” And the administration made a decision that they would provide some assistance to the Saudis, partly to make sure that the Saudis still felt secure in their relationship with the United States. Now, when you talk to most of the former Obama administration officials, they will say that was a mistake, that they could never have fathomed the level of brutality of the Saudi regime in Yemen. They couldn’t have fathomed the civilian casualties.

AMY GOODMAN: Democratic Congressmember Ro Khanna of California. To hear him weighing in on the North Korea-U.S. summit, you can go to democracynow.org.

This is Democracy Now! When we come back, major Supreme Court decision on voter purging, and over a hundred people are arrested in Washington, D.C., as the Poor People’s Campaign continues. Stay with us. 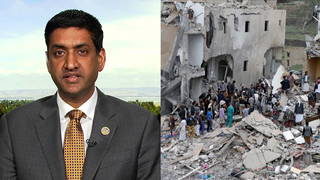