Tuesday marked four years since Eric Garner was killed, when a white New York City police officer wrestled him to the ground, pinned him down and applied a fatal chokehold, while Garner said “I can’t breathe” 11 times. The incident was captured on a cellphone video and spurred mass protests. On Monday, NYPD announced it plans to move forward with long-delayed internal disciplinary proceedings against the officers involved, if the Department of Justice does not announce criminal charges by August 31. Officer Daniel Pantaleo, who applied the fatal chokehold, continues to work for the New York Police Department on paid desk duty and has received multiple raises since Garner’s death. Garner’s mother Gwen Carr called for justice at a press conference this week and joins us in studio. Her forthcoming memoir is titled “This Stops Today: Eric Garner’s Mother Seeks Justice After Losing Her Son.”

JUAN GONZÁLEZ: Well, this Tuesday marked four years since Eric Garner, an African-American father of six, was killed when a white New York City police officer wrestled him to the ground, pinned him down and applied a fatal chokehold, while Garner said “I can’t breathe” 11 times. The incident was captured on a cellphone video, and his killing spurred mass protests. This week, the NYPD announced plans to move forward with long-delayed internal disciplinary proceedings against the officers involved, if the Justice Department does not announce criminal charges by August 31st.

AMY GOODMAN: Officer Daniel Pantaleo, who applied the fatal chokehold, continues to work for the New York Police Department on paid desk duty, has received multiple raises since Eric Garner’s death. On Tuesday, Garner’s mother Gwen Carr called for justice at a news conference on the steps of City Hall with elected officials and activists.

GWEN CARR: It’s been four years, and my family has not seen any responsibility taken by the de Blasio administration for the police’s misconduct. All those officers that day, they need to stand accountable for what they did to my son. They killed him. He was unarmed. … My son was doing nothing but trying to help the community, and they took his life. This has to stop. In the black and brown community, they have to treat us with dignity, as they do in other communities. And until this happens, we’re not going to stop.

AMY GOODMAN: That’s Eric Garner’s mother, Gwen Carr, who’s joining us in studio, organizing an event this weekend to bring together mothers from around the country whose loved ones were killed by police. She’s got a forthcoming memoir, This Stops Today: Eric Garner’s Mother Seeks Justice After Losing Her Son.

AMY GOODMAN: So, the New York Police Department announced that if the Justice Department doesn’t come down with findings or investigation results by the end of August, they will start these internal proceedings against officers involved with your son’s death. Talk about your response. They’re talking both about Daniel Pantaleo as well as the supervisor on the scene, who was Kizzy Adonis, one of the first supervisors at the scene.

GWEN CARR: Yes. They are talking about the two of them, but they’re not talking about the other four officers that was involved. And what I would like to see is that all of the officers that was involved in my son’s death that day be accountable and transparent, and that they get fired from the force, because they are the ones that is responsible for my son’s death. And there were other officers who were on the side, that no one ever saw, that they filed false reports before anyone saw the video. So they should stand accountable also.

JUAN GONZÁLEZ: And I’m wondering—we were just discussing with Reverend Jackson the recent killing in Chicago and the continued incidents that we’re having across the country of police shooting unarmed African Americans or folks who are not posing any immediate threat to them. I’m wondering your thoughts on that?

GWEN CARR: Yeah, it’s like an epidemic. It keeps happening over and over again. And it’s always in our communities. I’m not saying that people don’t get killed in other communities, but it’s a vast amount, the vast majority, gets killed in the African-American and the black and brown communities. And this is what we need to stop. And the only way it’s going to stop, if we step up and we speak about it and we be about it.

GWEN CARR: No, I haven’t been communicating with the mayor. What has happened, it seems so ironic that they would announce on the eve of my son’s anniversary that they’re going to move forward, when in fact they could have moved forward way before now, because the DOJ gave them the go-ahead back in April, you know, that they didn’t have to wait for them to go forward with their charges. So, they could have done this. So why not in May, June or early July?

JUAN GONZÁLEZ: And the whole issue, how long it’s taken the Justice Department to conduct an investigation?

GWEN CARR: Yes, four years. Four years. Why take so long? I mean, it’s like political procrastination. That’s what it is, because it shouldn’t take this long. The whole world’s seen what happened to my son. It was on video. So, what else do they need? I mean, all I’m seeking is justice, closure, for my son. There’s no justice for my son because he’s gone. But, for us, the family, we need closure.

AMY GOODMAN: You know, we don’t want to show the image over and over of your son being killed, but we’re showing it right now because you see how many officers are involved in this.

AMY GOODMAN: First you have Pantaleo and other officers bringing him down, and then more join in this as they’re holding him down, as he is saying, “I can’t breathe.”

GWEN CARR: And they are paying him no attention at all when he’s saying, “I can’t breathe.”

AMY GOODMAN: What is your explanation? What did the—what does the city and the Justice Department tell you about why these officers aren’t held accountable?

GWEN CARR: Because this is what they do. And, you know, if the higher-ups don’t hold them accountable, they feel like it’s OK for them to do this. And which it’s not. We are all American citizens, and we all deserve the same type of treatment. And they come into the African-American neighborhoods, and they just brutalize, they terrorize, they kill us. And most of the time we’re unarmed. My son was breaking up a fight that day. He was trying to help someone. And they came and targeted him. And they took him down, and they killed him, for no apparent reason.

AMY GOODMAN: And the explanation of the Justice Department why they have not moved on this in four years?

GWEN CARR: They’re saying that they are turning over every stone, that they are making sure before they make a decision. How many stones are there? How many pebbles of sand do they have to turn over?

AMY GOODMAN: We want to thank you for being with us, Gwen Carr, mother of Eric Garner, African-American father, Staten Island resident, killed by police four years ago this week, as they took him down, pinning him in a fatal chokehold, as he gasped “I can’t breathe” 11 times, grandmother of Erica Garner—

AMY GOODMAN: —who also fought so hard for justice for her father’s death.

GWEN CARR: Yes, she did.

AMY GOODMAN: And that does it for our show. We have job openings, full-time news producer position here in New York. Please go to democracynow.org to apply immediately. 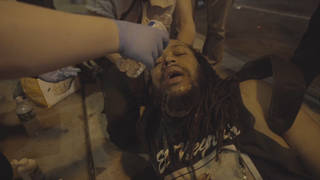