Migrant Children Detained in Shelters Being Drugged, Told Not to Hug, Forced to Bathe in Sinks

The Trump administration has less than a week to meet a court-ordered deadline to reunite children and parents separated at the U.S.-Mexico border under its “zero tolerance” policy. This comes as advocates say some migrant children have been released from federally contracted shelters with scabies and lice. In Illinois, officials are investigating the Chicago nonprofit Heartland Alliance over allegations it housed children separated from their parents at the border, with many of the children reportedly suffering abuse and neglect. We speak with Reveal reporter Aura Bogado, who has exposed a second office used by military contractor MVM to hold migrant children. This time, the children had to bathe in bathroom sinks.

AMY GOODMAN: The Trump administration has less than a week to meet a court-ordered deadline to reunite thousands of children and parents separated at the U.S.-Mexico border under its “zero tolerance” policy. Federal officials reported Thursday just 364 of more than 2,500 families with children age 5 and older have been brought back together. Another 848 have been cleared for reunification, but 229 parents have been deemed ineligible, reportedly because of criminal records or because they waived reunification. More than 700 of the parents have been ordered deported.

This comes as advocates say some migrant children have been released from federally contracted shelters with scabies and lice. In Illinois, officials are investigating the Chicago nonprofit Heartland Alliance over allegations it housed children separated from their parents at the border, with many of the children reportedly suffering abuse and neglect. The Washington Post reported one boy at Heartland Alliance’s facility Casa Guadalupe was repeatedly injected with a drug that made him drowsy, while another boy was denied medication for weeks after injuring his arm. The Washington Post also says children were surveilled with hidden cameras, prevented from hugging their brothers and sisters. They’ve been separated from their parents.

A report by Reveal from the Center for Investigative Reporting shows taxpayers paid more than one-and-a-half billion dollars in the last four years to companies operating immigrant youth detention centers that faced accusations of serious lapses in care. Children held at Shiloh Treatment Center near Houston, Texas, were restrained and injected with powerful anti-psychotic drugs against their will, making them dizzy, listless, obese, even incapacitated.

Meanwhile, the U.S. military and CIA contractor MVM has admitted it detained migrant children overnight inside a vacant Phoenix office building with dark windows, no kitchen, only a few toilets. A Reveal investigation earlier this month uncovered what some are calling a “black site” for migrant children, after a neighbor filmed children in sweatsuits being led into the building. The building was leased in March by MVM, a military contractor. Now a new report by Reveal shows MVM also operated a second office nearby, where a neighbor reported seeing immigrant children bathing themselves in bathroom sinks.

For more, we go to San Francisco for an update from Aura Bogado, who is immigration reporter for Reveal from the Center for Investigative Reporting, her latest report story headlined “Immigrant kids held in second Phoenix office seen bathing in sinks.” Her other report is headlined “Immigrant children forcibly injected with drugs, lawsuit claims.”

Aura, give us the latest.

AURA BOGADO: Hi, Amy. Thanks so much for having me back.

You know, we just reported this first story out two weeks ago. Back then, we knew that children, according to neighbors, were held overnight in this office, this unlicensed, unmarked office in central Phoenix. And at that time, ICE told us that its contractor, MVM, was not authorized to hold children overnight, that their contract only allows for same-day transport and that they are allowed to use that office for what ICE calls a “waiting area.” The company itself, MVM, again, this company that has strong CIA ties, a defense contractor, told us—originally said that they don’t operate any kind of shelter or housing, then told us that they use some of their offices as a temporary holding place for children that it’s transporting. Less than a week after our initial report came out, MVM did have to confirm to Reveal from the Center for Investigative Reporting that it was indeed sometimes holding children overnight. We were able to figure that out from documents that we were able to gather about some of the children that were held there.

Then, just a few days later, we got some more information that there was a second office in which they were holding children overnight, also in Phoenix, less than a mile away from the first office. And MVM did also have to acknowledge that that was the case. So now we know about two places, that are, again, unmarked, unlicensed. And neighbors sometimes know about the existence of them. MVM certainly knows about the existence of them. But these are these—they’re not shelters. They’re not exactly waiting areas. But they are places that have held children overnight. A lot of those children are children that were separated from their parents.

AMY GOODMAN: Who are the kids? Where are they from, these separated children?

AURA BOGADO: All of the kids that I’ve identified have been from Latin America. They mostly are from Central America, specifically from Guatemala and from Honduras. Some of the kids did appear to arrive by themselves or with a group of friends, but most of the children that I’ve been able to identify that have been through there were indeed separated from their parents.

At this point I’ve tracked down several of the children. I’ve spoken with several of their sponsors. I’ve spoken with several of their parents. And that’s also been really difficult conversations sometimes to have with their parents. There was a—there’s a mother, specifically, that I’ve been speaking with. You know, her son was only 6 years old when he was taken from her and placed in this office building, which is, again, not a shelter. It’s not licensed to operate as such. It’s not authorized under its contract to hold children overnight. And I’ve had to, you know, sometimes explain to parents, who are still in detention, who are still separated from their children and want to know anything that they can—I need to sort of explain to them where they were held.

And, you know, when it comes to taking a shower, with the second facility, a neighbor there, Bill Weaver, explained to me that on multiple occasions over the course of two years, he saw children using bathroom sinks to bathe themselves. This is a shared office bathroom area in which three office suites were able to sort of go in and out, just like you see in a lot of offices. It’s not exactly a public bathroom, but people can come in and out. So that also raises a lot of questions about what kinds of people may have come into contact with these children over the time that they were held in these offices by MVM.

AMY GOODMAN: Aura, you were the first to report on the drugging of children. That was at Shiloh in Texas. We’re now seeing this Washington Post report about Casa Guadalupe. That’s in Chicago, run by Heartland Alliance. So, in that case, we hear about kids being injected with some kind of drugs. The kids don’t understand. Explain what you found.

AURA BOGADO: Sure. I’m not too familiar with the Chicago story. I have been so laser-focused on trying to track down the children that we know were held at MVM offices. But I do know, from the story that we broke about Shiloh and the widespread abuses in so many of these shelters, the shelters that we do know the existence and locations of, everything ranging from sexual assault to neglect, and then, yes, forced drugging.

In Shiloh, children do allege that they were held down and injected with very powerful drugs. I spent time with a little boy who was 9 years old when he spent six months there. And he was given very, very, very heavy psychotropic drugs. I was just texting with his mom actually earlier today, Maribel Bernardez. She finally got her son back after six months. But, you know, during the whole time he was there, she was so worried, because she saw him lethargic. She couldn’t recognize this child that she was sometimes seeing through WhatsApp video, when she was able to call and see him. He was—he felt very slow. He told me that he just felt like he was really slow and tired when he was there.

And, you know, he wound up at this facility because he tried to run away. He wanted to be with his mom. We know that children miss their parents. And he wanted very desperately to be with his mom, so he talked about running away, and he tried to run away. And that was one of the reasons for which he was evaluated by a psychiatrist and then sent to Shiloh, where he was drugged for six months, without his consent and without his mother’s consent. The government knew full well where she was the entire time. A caseworker was in touch with her that entire time. They wouldn’t give her custody of him. And they kept drugging him that whole time. She’s still working to taper him off those drugs. He’s only 10 years old now.

AMY GOODMAN: Aura Bogado, I want to thank you for being with us, immigration reporter for Reveal from the Center for Investigative Reporting. We’ll link to your pieces, “Immigrant kids held in second Phoenix office seen bathing in sinks” [link], and your other recent report, “Immigrant children forcibly injected with drugs, lawsuit claims.”

This is Democracy Now! In 30 seconds, we’ll go to a report of a mother who talks about reuniting with her 3-year-old boy, and we’ll speak with a psychoanalyst who is warning parents of separated children, when they reunite, they may not be the same child that left them. Stay with us. 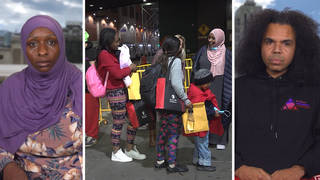