After an agonizing 9-month search, the body of Olivia Lone Bear was found Tuesday in a pickup truck submerged in a lake right by her house on the Fort Berthold Reservation. The mother of five went missing in late October in New Town, North Dakota. Her disappearance has sparked renewed attention to the disproportionately high rates of disappearance, rape and murder of Native American women across the United States. These already-alarming rates are particularly high in areas of oil extraction, like North Dakota’s Bakken Shale, which is the origin point for the Dakota Access pipeline. We speak with Olivia Lone Bear’s brother Matthew, who spent the last nine months searching for his sister. We also speak with Mary Kathryn Nagle, a citizen of Cherokee Nation and a partner at Pipestem Law, a law firm dedicated to the restoration of tribal sovereignty and jurisdiction.

AMY GOODMAN: This is Democracy Now!, democracynow.org, The War and Peace Report. I’m Amy Goodman. We end today’s show in North Dakota, where, after a 9-month search, the body of Olivia Lone Bear was found Tuesday in a pickup truck submerged in a lake right near her home on the Fort Berthold Reservation. The mother of five went missing in late October in New Town, North Dakota. Her disappearance has sparked renewed attention to the disproportionately high rates of disappearance, rape and murder of Native American women across the United States, particularly in areas of oil extraction, like North Dakota’s Bakken Shale, which is the origin point for the Dakota Access pipeline.

For more, we’ll speak with her brother, Matt Lone Bear, who spent the last nine months searching for his sister. He’s joining us by phone from New Town, North Dakota. And we go to Tulsa, Oklahoma, to speak with Mary Kathryn Nagle, a citizen of Cherokee Nation, partner at Pipestem Law, a law firm dedicated to the restoration of tribal sovereignty and jurisdiction.

We welcome you both to Democracy Now! Matt, I want to begin with you. Our condolences to your family on the death of your sister Olivia Lone Bear. Can you talk about how she was found in this submerged truck right near her home?

MATTHEW LONE BEAR: As far as what we were told by law enforcement, Williams County, you know, sent some divers in, and they were—sent divers down, and then I got a text message saying that they’re hooking up something in the water. So then that’s when I got there. But, you know, as far as getting a debriefing from the police department or anything like that, we still haven’t gotten any word on how exactly everything went down. But—

AMY GOODMAN: The reaction of your family to the discovery of Olivia’s body?

MATTHEW LONE BEAR: You know, heartbreak, after nine months of looking. You know, looking on our reservation, you know, that’s almost a million acres. And then, come to find out that—you know, we’ve been pushing for this water search since November, and, lo and behold, you know, she was found within a mile of her home.

AMY GOODMAN: What do mean you were pushing? Who were you pushing to do this search of the lake?

MATTHEW LONE BEAR: Lead law enforcement was Tribal PD in the beginning. And then, in January 2018, BIA took over. Pushing with the BIA. And then, you know—

MATTHEW LONE BEAR: Yeah, Bureau of Indian Affairs. And then, you know, we had the state’s office involved, Scott Davis’s office.

AMY GOODMAN: And they have boats to do this?

AMY GOODMAN: They have boats to do this?

MATTHEW LONE BEAR: Yeah, and even our own Tribal PD has got boats. You know, we have boats available on our reservation. And none of them got on the water.

AMY GOODMAN: Why wasn’t it done until now? Because when they did it, they found her almost immediately.

MATTHEW LONE BEAR: Mm-hmm, and that’s—there’s so much red tape that went on, you know. Right toward the end here, you know, we had Tribal PD and BIA point fingers about who’s going to do the water search. And, you know, they were chomping at the bit back in January. They said, “As soon as the water thaws out, we’re going to be on the water. We’re going to search the water 100 percent,” which is a lot of water. But then, you know, fast-forward three months down the road, and they still had no boats on the water. They just—you know, it just became accountability at that point, and I don’t think anybody wanted to take accountability for all that water search. So, as far as the family goes, you know, we did what we had to do as far as doing a land search, but we don’t have resources and/or knowledge to do a water search, so we relied on law enforcement agencies to do this. And, you know—

AMY GOODMAN: Do you feel they made the search of your sister Olivia Lone Bear a priority?

MATTHEW LONE BEAR: No, I don’t. I don’t. I don’t think they did. You know, right toward the end, too, our BIA agents were kind of—it was kind of a revolving door for the last month and a half, two months. You know, agents come in for seven days and leave, and, you know, two weeks and leave. You can’t learn, you know, seven months, eight months of a case in two weeks’ time or a week’s time. So it just kind of showed us what kind of priority we were. We were never told like if—how long they’re going to be there or anything like that. So, it was just like—it was totally confusion—total confusion at the end.

AMY GOODMAN: I wanted to bring Mary Kathryn Nagle into this conversation. You’re a citizen of Cherokee Nation. You’re with the Pipestem Law firm. Can you talk about the broader issue of missing indigenous women around the country?

MARY KATHRYN NAGLE: Yes. Thank you. And first I just want to say, Matthew, I’m so sorry for your loss and your family’s loss. And I know that this is not a—not the resolution that anyone hoped for.

But, unfortunately, in Indian country, in some reservations, our women are murdered at rates 10 times the national average. The rates of violence, whether you’re talking about just domestic violence or sexual violence, are incredibly high against our Native women, but the rates of murder and the rates at which our women go missing are even higher. And that’s been documented by the Department of Justice, United States attorneys, United States senators, who are, fortunately, now starting to propose legislation to deal with the crisis. But it is nothing less than a crisis, when you think about the numbers and the percentages at which our women go missing and murdered.

AMY GOODMAN: Mary Kathryn Nagle, can you address the issue of jurisdiction? Who investigates this?

MARY KATHRYN NAGLE: And you can see here just how problematic it is when our own tribal police don’t know whether or not they have jurisdiction. And I can’t speak to all of the decisions that were made on the ground here, but I can say that in 1978 the United States Supreme Court stripped our nations of our inherent criminal jurisdiction over anyone who comes onto our lands and commit crimes. So that means that, today, when a woman goes missing, if a Native woman goes missing, her tribal government cannot exercise any kind of police jurisdiction over that crime, unless the government knows that the perpetrator was Native. And that’s because the Supreme Court says we don’t have jurisdiction over non-Natives who come onto our lands and kill our women or our children or really any tribal citizen. And depending on the circumstances, unfortunately, the federal legal framework around this has become incredibly complicated.

And there have been pieces of jurisdiction that have been restored to tribal nations. For instance, in the 2013 reauthorization of the Violence Against Women Act, in that reauthorization, one piece was restored, and that’s jurisdiction over domestic violence. So if a non-Indian commits a domestic violence crime, today tribal nations can prosecute that. However, you know, murder was not restored. And so, sex trafficking, that’s another crime that our women suffer at disproportionate rates. If the perpetrator is believed to be non-Native or if the tribal police cannot know with any kind of certainty that the perpetrator is Native, under federal law, they likely do not have jurisdiction to even arrest, let alone prosecute, these crimes.

MARY KATHRYN NAGLE: It is. It is. And, you know, there’s been a lot of research to document and study that. And, in fact, even the Department of Justice Office on Violence Against Women recently—they give out federal grant funding from the Violence Against Women Act to different domestic violence programs around the country, Native and non-Native. But in their recent proclamation that they were putting out different grants, they noted the increasingly high rates of violence and sex trafficking and domestic violence in the Bakken, in particular, with the increase in oil production, and have allocated millions of extra dollars to DV and sexual assault programs in the Bakken, out of a recognition that the rates are becoming extraordinarily high. I know Senator Jon Tester from Montana and Senator Heidi Heitkamp have both spoken openly about the increased rates of violence in the Bakken area, as well as former U.S. attorneys.

And, you know, it’s not that difficult to wrap your brain around, when you think about the fact that if you look at the Bakken, for instance—and this is true of any area where you have a rapid increase of extractive industries on tribal lands, because you have a situation where the tribal nation has been stripped of its jurisdiction. And, for instance, in the Bakken, from 2009 ’til now, there have been more than 100,000 new workers, who previously did not live in North Dakota or in the Bakken, who have come to that region just to work in the man camps. And with them, they bring increased rates of crime, and one of them is domestic violence and sexual assault. And so, it certainly overwhelms the law enforcement on the ground. But when you compact that with the fact that often our tribal nations are without jurisdiction, based on the identity of the perpetrator, it really creates a crisis. 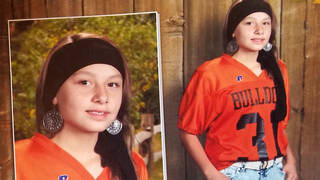