Senate Judiciary Chair Chuck Grassley has set a 10 a.m. Friday morning deadline for Dr. Christine Blasey Ford to decide whether she will testify about her allegation that Supreme Court nominee Brett Kavanaugh attempted to rape her at a high school party when she was 15 years old. But Dr. Blasey Ford’s lawyers say an FBI investigation into her claims should be conducted first. Attorney Lisa Banks issued a statement Wednesday saying, “The rush to a hearing is unnecessary, and contrary to the committee discovering the truth.” We get response from journalist Sarah Posner, reporting fellow at the Investigative Fund at The Nation Institute.

StoryOct 01, 2018Ex-Senate Aide: Judge Brett Kavanaugh Has Lied Every Time He Has Testified Under Oath

NERMEEN SHAIKH: Senate Judiciary Chair Chuck Grassley has set a 10 a.m. Friday morning deadline for Dr. Christine Blasey Ford to decide whether she will testify about her allegation that Supreme Court nominee Brett Kavanaugh attempted to rape her at a high school party when she was 15 years old. But Dr. Blasey Ford’s lawyers have said an FBI investigation into her claims should be conducted before the committee holds a hearing.

Attorney Lisa Banks issued a statement Wednesday, saying, quote, “The committee’s stated plan to move forward with a hearing that has only two witnesses is not a fair or good faith investigation; there are multiple witnesses whose names have appeared publicly and should be included in any proceeding. The rush to a hearing is unnecessary, and contrary to the committee discovering the truth,” end-quote.

In a letter to Blasey Ford’s legal team, Grassley said, quote, “It is not the FBI’s role to investigate a matter such as this.” He spoke to reporters Wednesday.

SEN. CHUCK GRASSLEY: Where I’m focused right now is doing everything that we can to make Dr. Ford comfortable with coming before our committee, either in an open session or a closed session or a public or a private interviews. That’s four different ways she can choose to come. And so I’m not worried about anything other than just focusing for the next few days on encouraging her to come.

SEN. SUSAN COLLINS: I don’t think she can reject, having made all of these serious allegations—I don’t think that she can reject all those options, because, otherwise, there are these very serious allegations hanging over the head of a nominee who has emphatically denied them. And that’s just not a good way for us to end. So I think she needs to come forward, and I think we need to provide her with any protection that she may ask for, for herself and her family.

AMY GOODMAN: Meanwhile, Dr. Blasey Ford’s former schoolmate wrote on Facebook saying she recalls hearing about the alleged assault involving Kavanaugh, though she says she had no firsthand information to corroborate the accuser’s claims. Cristina Miranda King wrote, quote,
“Christine Blasey Ford was a year or so behind me, I did not know her personally but I remember her. This incident did happen.” King has since removed the post.

This comes as President Trump has stepped up his defense of Kavanaugh, saying it was hard for him to imagine, quote, “anything happened.” He referred to Judge Kavanaugh as “Justice Kavanaugh” three times during a 7-minute exchange with reporters.

PRESIDENT DONALD TRUMP: I would say this. I think he’s an extraordinary man. I think he’s s a man of great intellect, as I’ve been telling you. And he has an unblemished record. … Look, if she shows up and makes a credible showing, that will be very interesting, and we’ll have to make a decision. But I can only say this: He is such an outstanding man. Very hard for me to imagine that anything happened.

AMY GOODMAN: The word “Justice” is only used for a Supreme Court judge.

Well, for more, we’re joined in Washington, D.C., by Sarah Posner, reporting fellow at the Investigative Fund at The Nation Institute. She has a new investigation about Kavanaugh headlined “The 'Anti-Catholic' Playbook.” And her article for The Washington Post is headlined “To Trump, Kavanaugh’s testimony about religious liberty made him worth the pick.” She’s also author of the book God’s Profits: Faith, Fraud, and the Republican Crusade for Values Voters.

Sarah, welcome back to Democracy Now!

AMY GOODMAN: First, just respond to the latest, the deadline that Dr. Blasey Ford has been given, 10:00 Eastern time Friday morning, to testify either publicly or privately to the Senate Judiciary Committee. Your thoughts on what has taken place now—the refusal of the Senate Judiciary chair, Grassley, to allow anyone else to speak, or, what Blasey Ford is calling for, an investigation by the FBI, that even Anita Hill got, an investigation so that this is not just a he-said/she-said affair?

And we know, from the experience with Trump’s now-disgraced staff secretary, Rob Porter, that the White House doesn’t take that background checking by the FBI very seriously. So they’re basically saying, “No, we don’t want to make this part of the background check for Judge Kavanaugh. We just want to go ahead with his nomination without having the FBI fully investigate everything that might be part of his background.”

Now, as far as—making Dr. Blasey Ford show up and testify in front of the committee, just her and Judge Kavanaugh, seems preposterous, under the circumstances, given that she says that there was another person in the room—this writer Mark Judge, who has said he will not show up to testify–and given that hundreds of people who were in school with both Judge Kavanaugh and Dr. Blasey Ford in the 1980s have come forward saying they believe Dr. Blasey Ford, that this was part of the environment at Georgetown Prep and at other elite private schools around the Washington area, including other elite Catholic schools. And so, you know, this—I think it’s 300 people signed a letter from other surrounding schools, including Georgetown Prep, and 925 women signed a letter—fellow alumna of Holton-Arms School, where Dr. Blasey Ford went to high school—saying that they believe her and that they would want to see an investigation.

And I would also point your readers to a very important article in The Washington Post this morning about how—which is based on interviews with over two dozen women who went to elite private schools in the Washington area where they intersected with people at Georgetown Prep and people at other elite boys’ Catholic schools, and that the environment was one of heavy drinking, drug use and regular sexual assault and sexual abuse of these girls.

In a 2015 article headlined “Hard Case Crime: the Beauty of Male Passion,” Judge writes about what he calls “damseling,” which he describes as “making a woman a passive damsel in distress who needs rescuing.” He goes on to write, quote, “Of course, a man must be able to read a woman’s signals, and it’s a good thing that feminism is teaching young men that no means no and yes means yes. But there’s also that ambiguous middle ground, where the woman seems interested and indicates, whether verbally or not, that the man needs to prove himself to her. And if that man is any kind of man, he’ll allow himself to feel the awesome power, the wonderful beauty, of uncontrollable male passion,” Judge wrote.

Sarah, can you respond to that, and what you think that says about this atmosphere that Georgetown Prep, the school that they both attended, had? And also let me just go to comments that Kavanaugh has made about this private school, Georgetown Prep, speaking very recently at Catholic University’s Columbus School of Law in 2015.

JUDGE BRETT KAVANAUGH: We had a good saying that we’ve held firm to, to this day, as the dean was reminding me before, before the talk, which is, “What happens at Georgetown Prep stays at Georgetown Prep.” That’s been a good thing for all of us, I think.

NERMEEN SHAIKH: So that’s Kavanaugh, Judge Kavanaugh, speaking in 2015 about Georgetown Prep, the school he attended when he allegedly committed this attempted rape. So, could you respond to that, Sarah?

SARAH POSNER: Well, I think that this is another example of why Dr. Blasey Ford’s account needs to be taken seriously, and that as part of its advise and consent, the Senate really needs to look into this and interview other witnesses, not just bring Dr. Blasey Ford and Judge Kavanaugh to testify, you know, his word against her word.

It’s becoming abundantly clear, even by the account of Kavanaugh himself and Mark Judge, that there was an environment there that was out of control, quite frankly. And let’s be like very clear and fair here. We’re not saying that every student at Georgetown Prep acted this way. But according to this article in The Washington Post this morning, which I again urge everyone to read, this was a very prevalent atmosphere there—the drinking, the drugs, the abuse of girls from neighboring high schools. So, you know, to look past all of this, look past what Mark Judge has written, look past Kavanaugh’s own remarks, would be a dereliction of the Senate’s duty. And quite frankly, I can’t imagine a White House that takes the background check system seriously not calling on the FBI to reopen its background check on Judge Kavanaugh.

Let me also add that Judge Kavanaugh has injected his own Catholic education into the confirmation process as proof of his values and morals bona fides. When he accepted President Trump’s nomination to the Supreme Court and gave a speech in the White House, he pointed to his education at Georgetown Prep and said that the school’s motto was “men for others,” and said that that drove his desire for public service and to serve other people. So he has portrayed the environment at Georgetown Prep in two different ways. He has portrayed it as an environment where he learned the value of service to other human beings, and he has also implied that it was like Vegas and we’re not going to talk about what happened there to other people. 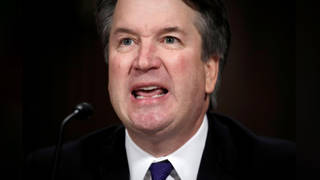 Ex-Senate Aide: Judge Brett Kavanaugh Has Lied Every Time He Has Testified Under Oath