“We Want Democracy to Be Restored”: Protesters in Chile Decry Inequality Amid Military Crackdown

In Chile, as many as eight people have died in widespread civil unrest that has brought Santiago to a standstill and sparked a violent police crackdown across the country. The protests began in response to a subway fare hike two weeks ago and have grown into a mass uprising against rising inequality, high cost of living and privatization. President Sebastián Piñera canceled the fee increase on Saturday, but protests are continuing, with a national strike called for today. Over the weekend, Piñera declared a state of emergency in Santiago and five other cities, imposing a curfew and sending the military into the streets in response to civil unrest for the first time since dictator Augusto Pinochet’s regime. Military tanks rolled through Santiago this weekend, and at least 1,400 protesters have been detained. Francisca Perales, one of the leaders of the newly formed left-wing political party Social Convergence, and Andra Chastain, an assistant professor of history at Washington State University in Vancouver, join us for a conversation about the massive protests in Chile.

AMY GOODMAN: This is Democracy Now! I’m Amy Goodman, as we turn to Chile, where as many as eight people have died in widespread civil unrest that’s brought Santiago to a standstill and sparked a violent police and military crackdown across the country. As protesters shut down Metro stations and police took to the streets with water cannons and tear gas, five people died in a fire at a garment factory outside Santiago over the weekend. At least three others were killed in a supermarket fire.

The protests in Chile began in response to a subway fare hike two weeks ago and have grown into a mass uprising against rising inequality, high cost of living and privatization. Conservative billionaire President Sebastián Piñera canceled the fee increase on Saturday, but protests are continuing, with a national strike called for today.

President Piñera declared a state of emergency in Santiago and five other cities over the weekend, imposing a curfew and sending the military into the streets in response to civil unrest for the first time since dictator Augusto Pinochet’s nearly 20-year regime. Military tanks rolled through Santiago this weekend as some 10,500 police officers and soldiers patrolled the streets. At least 1,400 protesters were jailed across the country. On Sunday, President Piñera vowed to extend the state of emergency, and declared war against protesters, calling them, quote, “a powerful enemy, who is willing to use violence without any limits.”

PRESIDENT SEBASTIÁN PIÑERA: [translated] The protesters are at war against all good Chileans who want to live in democracy and peace. General Iturriaga, who is in charge of dealing with this state of emergency, has been able to deploy 9,500 men to protect your peace, your tranquility, your rights and your liberty. I want to express my gratitude to these 9,500 people of the armed forces, the military, who are confronting these violent people and criminals.

AMY GOODMAN: Protests will continue today throughout Chile. Chile is one of the richest countries in Latin America but also one of the most unequal.

For more, we’re joined by two guests. In Viña del Mar, just a hundred miles from Santiago, Francisca Perales joins us via Democracy Now! video stream, one of the leaders of the newly formed left-wing political party Social Convergence, and has participated in several social movements in Chile since 2008. And joining us from Portland, Oregon, Andra Chastain, assistant professor of history at Washington State University in Vancouver, Washington. She’s currently writing a book on the history of the Metro system in Santiago, Chile, in the context of shifting political regimes.

We welcome you both to Democracy Now! Let’s begin with Francisca, speaking to us from Chile. Can you describe what has happened over the last two weeks? Describe the scene in the streets, why people are protesting.

FRANCISCA PERALES: OK. Hi, everyone. Can you hear me?

AMY GOODMAN: We hear you fine.

FRANCISCA PERALES: OK. I’ll start to say a little bit about the recent events here in Chile, but I also want to give you the overview of everything we are thinking that is happening right now.

First, the recent riots started after Piñera raised the subway fare in Santiago. It’s a really low fare. It’s really low. It’s like not — it’s not a lot of money, but it’s really significant because here in Chile we have a really low minimum wage. And we have people that go out to the subway every day and have to travel for about two hours to get to their jobs. So it’s really significant, that raise in the subway fare. So, after that happened, the students called to evade payment, generating great acceptance in the public eye. They started evading everywhere, in every subway station. And the people started joining them in that evasion. So, afterwards, the government responded, deploying policemen in every subway station to repress this act. They started beating the children. They started filling the subway stations with a lot of policemen. And I think they thought this was enough to contain the protest, but it wasn’t.

So, after that, the people in every city of the country, in every big city of the country, started to go out to the streets to protest, and broadened all the protests all around the country, reflecting years of injustice in different types of things in Chile, like healthcare, education, water privatization, environmental issues and so on. We have a lot of issues going on here in Chile, so it’s not just about the subway fare right now. The people took to the streets to say they’ve had enough of a country ruled by the elite for the elite. So I think this is the issue right now.

People are going out even though Piñera has had a really bad response about the situation, and the people are filling the streets. Yesterday in Santiago, we had like 20,000 people in a square, in a public square. All day long they were there, from like 10 a.m. until 8 p.m., and it only got bigger as the day passed, as the day passed on. So, I think this protest will be growing over the days, even though Piñera has deployed more policemen, more soldiers, more tanks to the streets, showing that the democratic oasis of Chile is a lie.

Last night — I know you put it on the broadcast — he told a national broadcast that we are at war. He told the people that we are at war with their countrymen. And we know that war and democracy can’t be together right now. So, I think it’s very important to see that we have a government that doesn’t have the — that doesn’t have the — I don’t know how you can say it, but they can’t give us the response we want them to, because they are only adding to the violence. Right now we have curfews. We can’t go out to the streets after 7 p.m. We have like 10,000 militaries deployed in the country. And they have been beating and firing their weapons against the people, even though there are a lot of people that are really peaceful, protesting really peacefully in the streets. So, I think — I’m actually like 34 years old, so I didn’t live the dictatorship, but for some people who lived the dictatorship, these days resemble those days. And we think that this is not how a democracy works, and we want the democracy to be restored.

AMY GOODMAN: Francisca, I want to bring our other guest into the conversation, professor Andra Chastain. You’re actually writing a book on the Metro system of Santiago, Chile. Can you talk about the significance of the spark for these protests being the increased fare in travel through the subway system of Chile, of Santiago?

ANDRA CHASTAIN: Yes, definitely. And thank you so much for having me on this morning.

So, I first want to say that this is nothing new. Transit fare increases have sparked major social protests in Santiago and throughout Latin America for over a century. And up until the dictatorship in 1973, social protest and political opposition and opposition to fare increases were a major reason why fares were held relatively low for many decades. There were uprisings in 1949, in 1957 in Santiago. And this has — so, this is nothing new. I also want to say that in 2007 there was a major overhaul of the transportation system that integrated the buses with the Metro, known as Transantiago, which also sparked major protests. So, this is nothing new. I think that social protest actually is a legitimate way to force the government into changing its policies.

I also want to say that the Metro has — it began in the late ’60s, and it has represented the Chilean state for many — for a very long time, and it has represented both the left and the right. So, under the socialist revolution of Salvador Allende, Allende supported the Metro. But after he was overthrown, the dictatorship of Pinochet kind of seized on the Metro as a shining example of what could happen under an authoritarian government. And since the return to democracy, both governments on the right and the left have held up the Metro as kind of an example of what they like to call the “Chilean miracle,” showing Chile to the outside world as this developed and democratic and exemplary model.

But what has happened since 1990 in the Metro is that since the Metro was not allowed at that time to have state subsidies as a result of the neoliberal policies put in place by Pinochet, the Metro has been run more and more like a private company, even though it is owned by the state. And so, it’s kind of a microcosm of what’s happening in Chile, where it seems, perhaps, to international observers like everything’s running very well, and they have a — they are sort of focused on the bottom line.

ANDRA CHASTAIN: Income and cost have to be equalized. And what that means is that workers inside the Metro and passengers are paying the price to achieve that financial equilibrium. And so fares have gone up.

AMY GOODMAN: We’re going to have to leave it there. We’re going to have to leave it there, but we’re going to do Part 2, and we’ll post it online at Democracy Now!, and we’ll also do it in Spanish at Democracy Now! en Español. Andra Chastain is assistant professor of history at Washington State University in Vancouver, Washington, joining us from Portland, Oregon, writing a book on the history of the Metro system in Santiago. And Francisca Perales, one of the leaders of the newly formed political party Social Convergence. I’m Amy Goodman. Thanks so much for joining us. 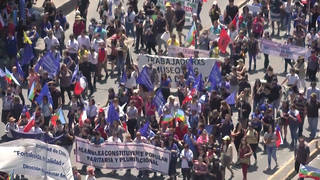